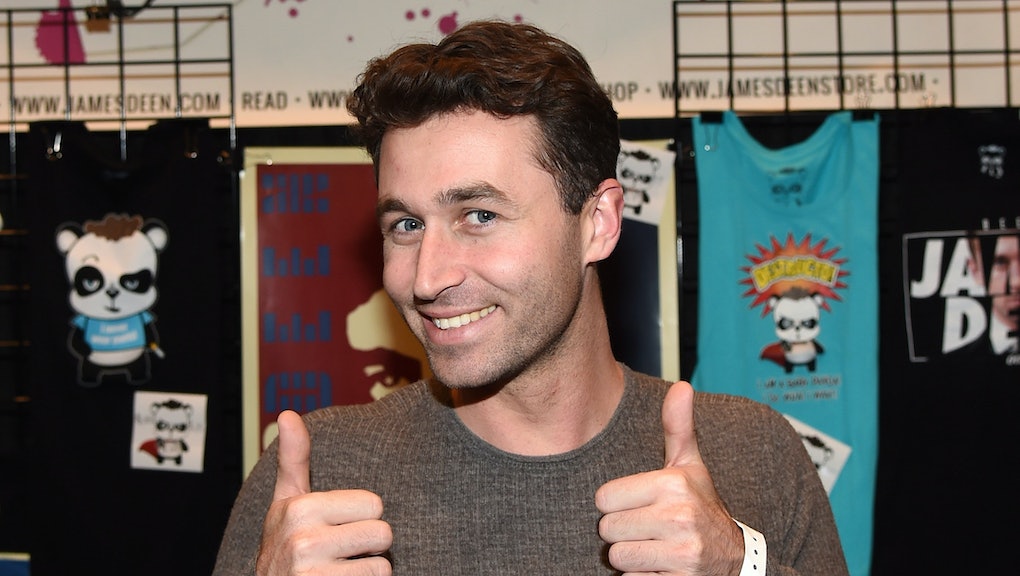 I wasn't entirely sure what to expect. On one hand, James Deen — performer extraordinaire, Lindsay Lohan collaborator and scruffy, Jewish fantasy bedmate of women everywhere — gets naked on camera for a living, and Snapchat is the perfect platform on which to exchange dirty material. On the other hand, he's a regular human being whose existence includes things besides sexual intercourse.

I gave Deen an assignment: surprise me with random snaps throughout the week. I couldn't predict the outcome, but I was confident the two of us were about to embark upon a bizarre and magical adventure. My friends warned me to prepare for a deluge of dong. My coworkers expressed excitement and concern. I elected not to tell my mother about the assignment.

As it turned out, however, I had nothing to hide.

The backstory: I approached Deen in late May after he tweeted about his difficulties with Snapchat.

A self-described "old man" (he's 29), he had downloaded the app with the intention of seeing what the "youth" were up to. After he made his username public, lots of people, mostly women, began sending him naked photos. But when he tried to dig deeper, he got lost: "Dear babes ... I don't really know how to use Snapchat because I'm secretly an old man," he confessed on Twitter.

Sensing an opportunity, I reached out to Deen's people to ask if he would be open to a Snapchat tutorial. It was a win-win: He'd learn the ropes of Snapchat, and I'd get a story and an excuse to brag to everyone I know.

"I'm really excited," Deen told me over the phone that rainy morning, munching a cucumber. "I have no idea what's going on."

The tutorial didn't take long. I walked him through the basic steps of sending a Snapchat, as well as how to add friends and how to snap back and forth with someone. We agreed to check back in after a week to track his progress. "I'm going to be a pro Snapchatter soon," he boasted as he hung up.

The snaps: Deen uses social media in much the same way non-porn performers do: to talk about the boring details of his everyday life. (A selection of his recent tweets: tacos, traffic and coffee.) The desire to learn how to use Snapchat was rooted in a similar principle: It would give him another way to lob random nuggets of wisdom out into the ether.

While we were still on the phone, he sent the first photo, posing with a bottle of Cholula hot sauce and the caption "Yay I'm snapping!!!!" He had drawn on an eyepatch and some facial hair for good measure. Next came a photo of his cat, followed by a fully clothed selfie, as well as a shot of some camera lenses and a water bottle full of red-colored liquid. ("Radioactive water," he called it.)

Over the course of the week, he also snapped the heavy traffic of his commute, the craft services table on set, which included cantaloupe, Starbursts and baby carrots, a cup of milky coffee, a selfie with his doppelgänger Michael Vegas and a parking lot in Las Vegas captioned "Vegas sucks."

The verdict: James Deen is, by my tally, a perfectly serviceable Snapchat pal. He leads a more interesting life than most people on my contact list. But everyone who predicted an onslaught of triple-X material and naked selfies was woefully mistaken.

I got cats. Lots and lots of cats.

Even when I goaded him a little — "Your snaps are boring!" — he just responded with more photos of his cats. Lots and lots of cats. Deen's feline affection is well-documented, and his own pets, Sebastian Vonn Wondercat Sam Hall III and Dr. Squeak McQueen Esq., featured prominently in his snaps and stories.

My editor suggested he wasn't sending me anything interesting because I was a reporter. My friends suggested he needed some time to warm up. As it turns out, none of those suggestions was the truth.

James Deen is all about consensual sexts. He has a big issue with sending graphic content on Snapchat, he told me when we checked in the next week.

"Just because it's my civil right to be able to view and do what I want to do, it needs to be other people's civil right to not have to be forced to view anything," he said. "Nobody should be exposed to anything they don't want to be exposed to, or that they are not ready [for]." He didn't know most of the people who were sending him Snapchats, and felt uncomfortable responding with nudity. He didn't want to add it to his story, either, for fear that someone who wasn't anticipating something dirty would be left with their jaw hanging open.

The man whose genitalia is splayed across the Internet wouldn't use an app infamous for sexts and NSFW videos to show off the goods.

"I'm going to make a point not to respond to anyone unless I know them personally, just because I feel like it would be potentially hazardous and dangerous," he explained. The primary problem centered around the fact that many of his fans are underage, including the ones sending him Snapchats, and he's not of the mindset that he should be sending them anything they couldn't show their parents.

"It's not a me-being-a-nice-person thing. It's a selfish morality thing of just not wanting to deal with the consequences personally," he said. "One [underage person] is enough for me to be concerned."

It was the height of irony: The man whose genitalia is splayed across the Internet wouldn't use an app infamous for sexts and NSFW videos to show off the goods.

I pressed him. What about consensual, age-appropriate communication?

"I could see myself using it for [sexting]," he conceded. Sexting, after all, usually takes place between acquaintances who have previously exchanged numbers. "But personally, it doesn't really make sense [in Snapchat]. I communicate with all the people I know via text message and email."

James Deen is making a powerful point about consent in the digital age.

The vast majority of his Snapchat contacts are random people; he told me I was the only person he actually knew on the app. "If I was going to send some kind of naked picture or graphic image, there's not really a concern of mine about having it deleted," he added.

Whatever he does on Snapchat, however, wouldn't be for profit. "I know there's a way to monetize [Snapchat]. People told me to do that. I'm not going to do that," he said.

Just as I was beginning to resign myself to a vanilla life on Snapchat, however, he dropped a glimmer of hope in my lap. "We're best friends on Snapchat," he assured me jauntily.

It may not have been the money shot, but it was something. Besides, there's always Google.