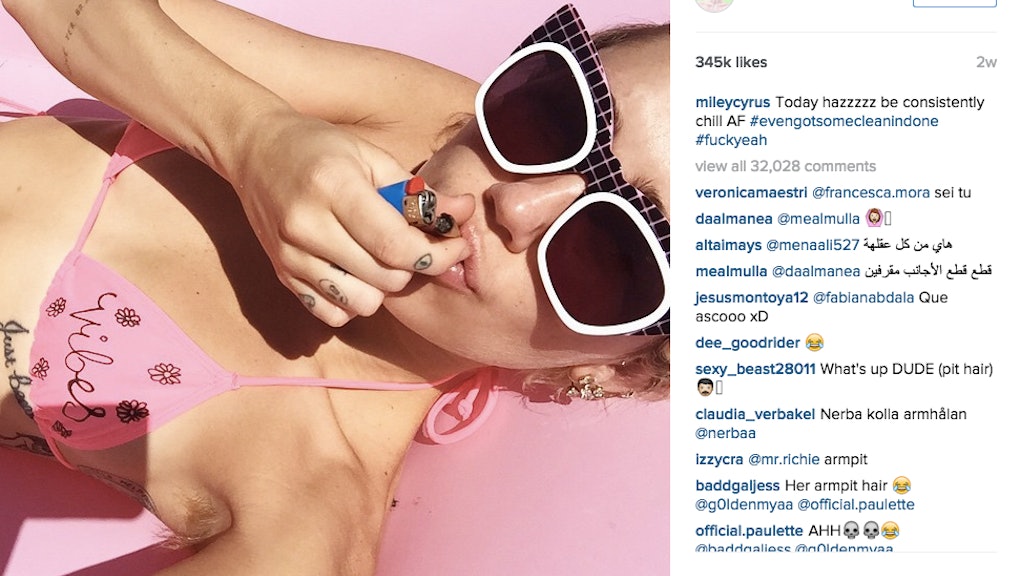 The latest beauty trend isn't about red lipstick or colorful hair. It's much messier, unrulier and perhaps smellier than that.

Armpit hair has been earning buzz on Instagram, red carpets and the New York Times Style pages alike. We've all had it since caveman days, and yet now, somehow, it's a "trend."

For women, at least. In a show of empowerment, young women across the Internet are leveraging the fixation on armpit hair and hitting back against traditional beauty standards that label women's body hair as disgusting and not fit to view.

Yet the celebration of female body hair, empowering as it is, also exposes the cultural tendency to frame conversations about equality by focusing on women's bodies. If we really want to end society's double standards, we shouldn't have to look at our bodies at all.

Celebs dare to bare hair: It's not just Miley being Miley, although Cyrus has been one of the highest-profile stars to flash her pit hair as of late. This spring, Madonna took to Instagram with an armpit photo and the caption "Long hair...... Don't Care!!!!!!" Jemima Kirke turned heads at the CFDA Awards earlier this month for her purposefully visible armpit hair.

Her Girls costar Lena Dunham is on the same wavelength, judging by a recent Instagram in which Dunham put "grow armpit hair" on her summer to-do list, and another in which she cheered on Kirke's CFDA red carpet photos.

Real women taking the lead: If the virality of the trend is any indication, the message of these women has been embraced with open arms by "real girls" with explicit goals of anti-body shaming and female empowerment. In December, that took the form of colorful pits, as women accentuated their hair by dyeing it bright colors and posting photos with the hashtag #FreeYourPits, in order "to start a conversation about normalizing the concept of the natural hair that grows on women's bodies," hairstylist Roxie Hunt previously told Mic.

#FreeYourPits and similar hashtags have grown in recent weeks. On Tuesday, Bustle declared #BodyHairDay and encouraged "all of those who are marginalized or shamed for having something so natural" to post pics depicting hair they might otherwise feel the need to shave.

Even in China, reported the New York Times this week, women's activist Xiao Meili has organized a contest to get women to proudly submit their pit hair photos to Weibo.

"For women it's kind of like you can shave and be accepted or not shave and be shamed. So, there's not as much of a choice," Erin McKelle, who launched #BodyHairDay on Bustle, told Mic.

Showing off our armpit hair directly challenges that unfair expectation. But at the root of the double standard is the inextricable link between women and their beauty and bodies. Just one glance at the viral "Dad Bod" phenomenon or headlines about female CEOs or politicians reminds us of that fact, as men are judged for their skills, power, charisma or any other cocktail of characteristics, while women are judged first and foremost for their looks.

The fact that we're fighting against gender double standard by focusing on women's bodies underscores just how limited women still are in gaining equal treatment and respect — and how women's bodies are still up for intense scrutiny, no matter how they choose to style them. It shouldn't have to be about hair at all.

Women's bodies have long been battlegrounds. We'll know we've won when we can move the fight to other (less hairy) fields.