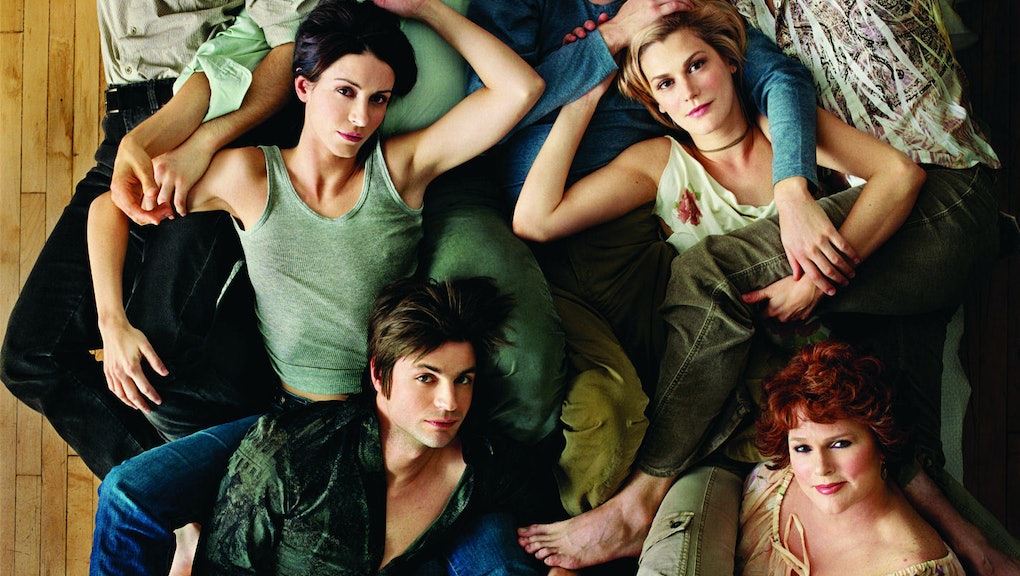 'Queer As Folk' Should Be Remembered as the Groundbreaking, Powerful Television It Is

The Sopranos is almost universally known as the herald of the golden age of television. It introduced to the world the idea of the prestige TV antihero with Tony Soprano. It started turning our attention from network to cable. Without The Sopranos, the golden age would not be.

It didn't do it alone, however. As New Yorker TV critic Emily Nussbaum argued in an essay titled "Difficult Women," The Sopranos' HBO neighbor Sex and the City deserves as much credit for its lasting impact. Yet there's one more show that also deserves a seat at that table: Showtime's Queer as Folk.

Debuting in 2000, two years after SATC and one after The Sopranos, Queer as Folk is seen in retrospect as the gay counterpart. It blended The Sopranos' antihero structure and SATC's sexy subject matter, but with a soapy twist. It dealt with questions about gay men and women integrating into society, and had stories about characters living with HIV. So why doesn't it have the same reputation?

Why doesn't 'Queer as Folk' have the same reputation as 'The Sopranos' and 'Sex and the City' as part of the changing of the tides on TV?

"We were part of this rush to tell more complicated, edgier, less traditionally constructed stories," star Peter Paige, who played Emmett, told Mic. He and other members of Queer as Folk's cast and crew did a joint interview with Mic after their reunion panel at the ATX Television Festival last weekend. During the interview, the question of why Queer as Folk's reputation suffered became a hot topic. Their guess as to why?

"Homophobia." That's what star Randy Harrison, who played Justin, told Mic, without hesitation. "What else would it be?"

Yet as the conversation continued to drift back to the idea of homophobia. "It was such a bizarre split of praise. It had a lot to do with the gay community," star Robert Gant, who played Ben, said. "We create these walls behind which we hide who we really are.

"To air all this stuff, to air the dirty laundry which we squeakily keep from the world, was really scary to people. ... I actually think that contributed to a lot. People were dragging along their own struggles."

There were explicit sex scenes in Queer as Folk — far moreso than were in Sex and the City. The depiction of such promiscuity, plus drug use and partying, may have been too many stories out of school for the show's gay audience.

"We were very naïve at the beginning, because we thought the community would embrace us," series creator Daniel Lipman said. "They were so shocked by this, by seeing their lives put up there so graphically and honestly, and I think they couldn't deal with that."

Considering how far "gay TV" has evolved since Queer as Folk, it seems difficult to place the blame on homophobia both in and out of the gay community. Yet remember the reception to Looking in 2014. The show about gay men mostly went praised or unnoticed by straight critics, but it sharply divided gay audiences. If that's what's happening in 2014, it's not so hard to imagine the same effect in 2000.

One could argue Queer as Folk was significantly worse than its HBO counterparts, but that's not quite fair. Queer as Folk had its bright moments just like Sex and the City, even if neither was as strong across the board as The Sopranos. Additionally, TV can be groundbreaking without being the highest quality. Glee was all over the place in its six seasons, but nothing can take away the power of seeing a joint gay wedding on network TV.

Queer as Folk deserves to be remembered as groundbreaking, powerful television. The fact that it isn't is insulting. While Will and Grace still couldn't let its lead gay characters share a passionate kiss with another man, Queer as Folk embraced sensuality and sexuality. It was, for many gay men and women out and proud today, their first experience seeing their lives reflected on a TV show.

No, Queer as Folk wasn't perfect. It did, however, break the mold. It did good for people who wanted to see themselves depicted in art. For that, it deserves a legacy like The Sopranos and Sex and the City. It's that simple.