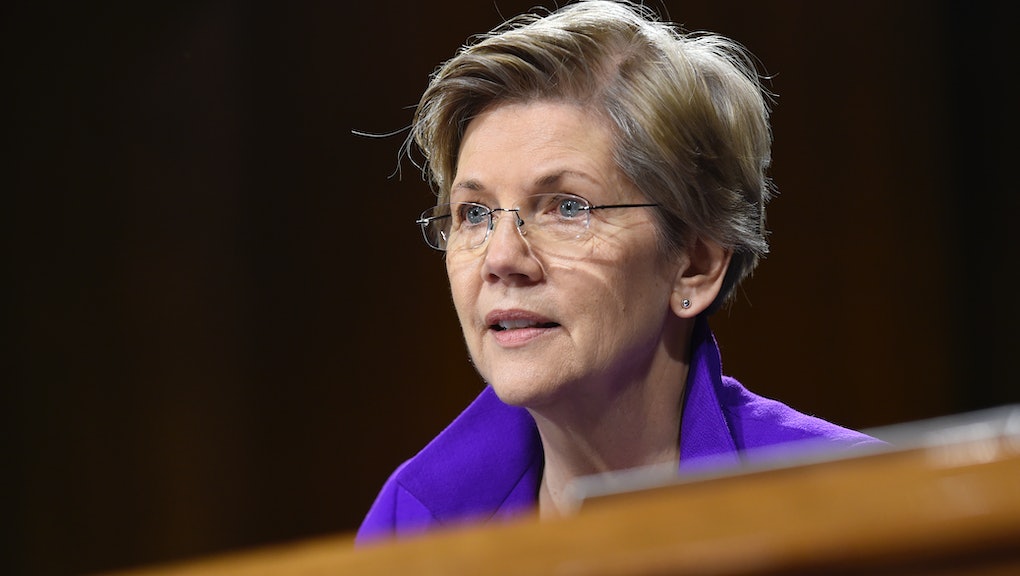 In May, presidential hopeful Sen. Bernie Sanders (I-Vt.) introduced a bill calling for public colleges and universities nationwide to offer free tuition to students. Less than a month later, Sen. Elizabeth Warren (D-Mass.) has managed to out-do him.

During a thoroughly wonky speech in Washington on Wednesday, Warren fleshed out a plan for making college "debt-free" — a proposal that goes beyond Sanders' plan because it addresses how to control the costs of college beyond the issue tuition. It's a significant addition to the education policy conversation, and advances an idea that the Democratic Party has grown increasingly interested in exploring in recent months.

Warren's plan: Warren's wonky speech centered on the dilemma that the U.S. faces in educating a country for whom innovation is an economic necessity yet for whom accessible higher education is a rapidly fading memory.

"Our economy cannot flourish if we don't have enough college-educated workers, but our economy will stagnate if students take on bigger and bigger debt loads to pay for college. Degrees push us forward, but debt holds us back," she said.

She lays out a number of ambitious policy ideas for solving this problem, all united by a vision that higher education shouldn't drown students in debt.

The speech goes deep in the weeds, but here are the essential points on what she thinks needs to be done to move toward debt-free college:

The federal government needs to provide cash, and lots of it. "The federal government can help states meet their responsibilities by directly partnering with them to support their colleges in the same way that the federal government partnered with states to build and maintain interstate highways," Warren said. "Every state university system in the country [should offer] at least one path to a debt-free college degree for all students."

Fix Pell grants: Warren called for increasing investment in Pell Grants — financial aid packages for low-income students that don't need to be paid back. According to Vox's Libby Nelson, "the biggest possible Pell Grant, which goes mostly to low-income students, used to cover about half of the price of a four-year college education. Now it covers only slightly more than a quarter."

Simply the financial aid process: Warren argued that the student loan application process should be simplified dramatically — and made available earlier so that families can use their loan eligibility to figure out which options make the most financial sense for them. Currently, many students don't even apply (nearly 30% of students in her home state of Massachusetts don't for financial aid) and could be forfeiting grants or the best loan arrangements available.

A much more forgiving student loan process: Warren made the case for more robust loan forgiveness plans for students who commit themselves to public service, who suffer economic calamity, and who are defrauded by for-profit career colleges.

Warren's plan isn't likely to take form in any kind of passable legislation while Republicans control Congress, but it will help shape the debate throughout the presidential election, and is another sign that college affordability will be at the forefront of the campaign.