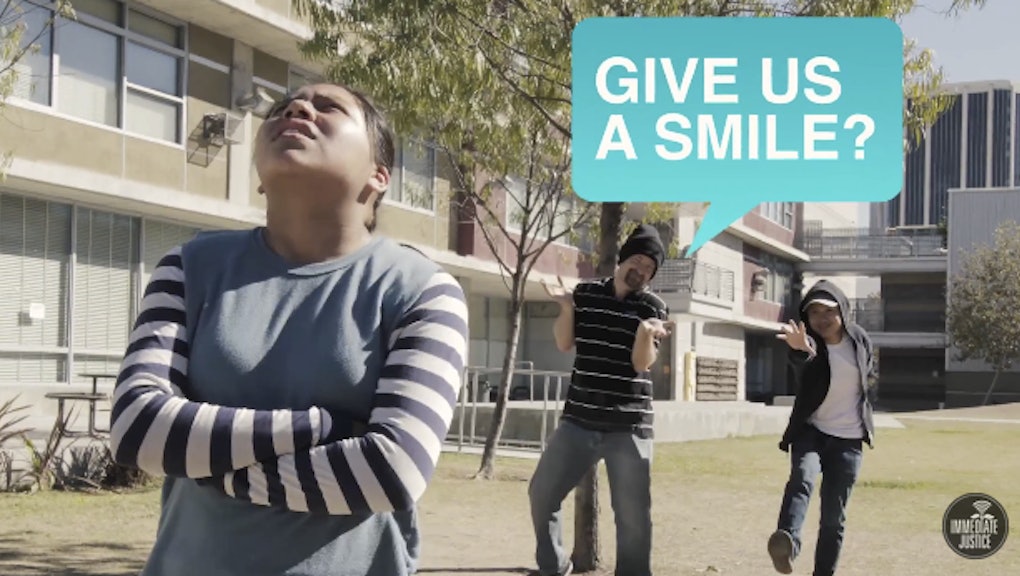 We know sexual harassment is still a huge problem, but it's not just confined to the workplace, and it's not just a problem for adults. Harassment pervades even the halls of high schools across the country and uniquely affects LGBTQ-identified girls and women of color. But a group of Los Angeles high school students recently talked about how getting hassled makes them feel, and even asked some of their male classmates why it happens.

"Street harassment disproportionately impacts young women of color and LGBTQ youth, but we rarely see representations of ourselves in the media," Tani Ikeda told Mic. Ikeda is the executive director of Immediate Justice, a media organization that trains under-served girls ages 14 to 18 in film production with a social justice lens. Sexual harassment, she noted, was a topic every one of this year's 15 Immediate Justice documentary participants had experienced, but one nobody had previously talked about openly.

"We talked about how the harassment we experienced also sexualized our racial identities or ridiculed us for not conforming to gender stereotypes," Ikeda said. Because the teens didn't feel anyone was addressing sexual harassment from the perspective of young, queer women of color, they decided to tackle this subject in their own film.

"It's a very dangerous world, and I never really understood that when I was younger," 16-year-old Mary Beth observes in the clip. "I've been harassed just about everywhere. I've been harassed here at school, on the streets, out with my friends and even in like, amusement parks and stuff where it's supposed to be kid-friendly."

"Me and my little cousin would always go run and then I would always wear shorts, because I felt comfortable with it," Laura tells the filmmakers. Then a man on a bike approached her, she said, and grabbed her. "I got scared," she says. "I feel kind of angry, because I can't be myself around in public, I can't wear shorts... Well, I can wear shorts, but I feel bad when I wear them. I don't like wearing them anymore."

The numbers back up these anecdotal experiences: A 2011 study found that 48% of middle and high school girls surveyed said they were sexually harassed at least once during the 2010-2011 school year. An incredible 85% of respondents to a 2015 survey conducted by Hollaback!, a project focusing on reducing street harassment, reported experiencing harassment for the first time before the age of 17, and 67% had before the age of 14.

Based on these experiences, this group produced a video titled "Catcall for What."

Since completing the film, the Immediate Justice girls have led anti-street harassment presentations at their school, along with a screening and discussion of their video, Ikeda told Mic. "They are talking directly with other young women and sharing their experiences," she said. "The film production has turned into a vehicle for putting social justice into action."

"If we want to combat catcalling, we have to give visibility to everyone who is affected by it — especially young women of color," Ikeda said. "Oppression ultimately destroys our ability to imagine that another world is possible. The girls at Immediate Justice are creating radical declarations of what the world could look like through their films."