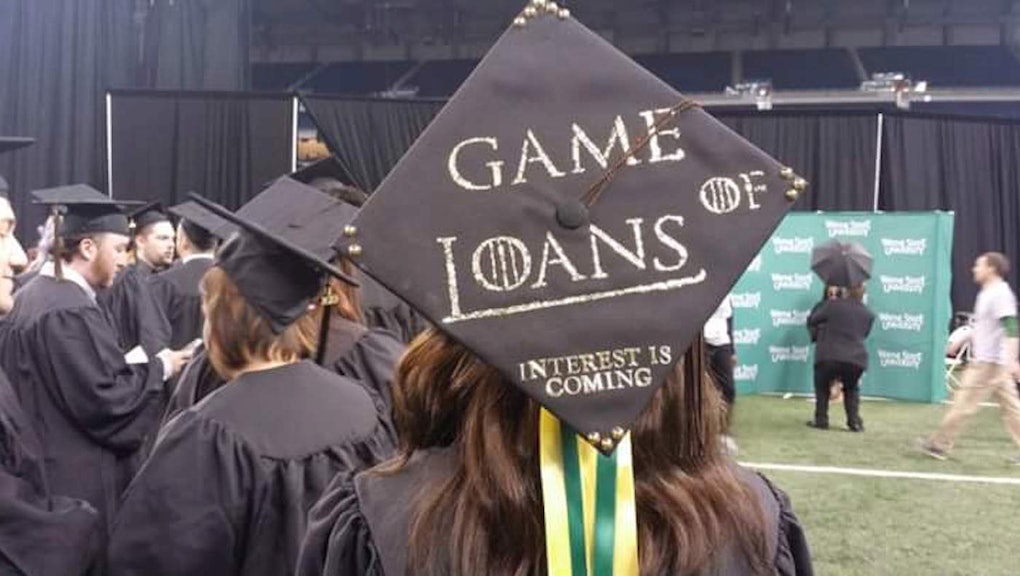 Report after report has shown student debt in the United States is out of control. With student debt rates climbing steadily for the last 20 years, the class of 2015 emerged as the most indebted ever, with the average borrower taking on more than $35,000 in loans to finance their ticket to the American dream.

Less well known, however, is that student debt disparities are more than just a story of rich and poor. They are about race. According to data the National Center for Education Statistics shared with Mic, from 2011-2012 (the most recent years available), black students were significantly more likely to have more student debt than their white counterparts.

Breaking down the numbers even further, at every income bracket, the percentage of black students with student loans was higher than that of white student loan recipients.

While the NCES data indicates both races are deeper in debt now than during their previous study in 2007-2008, the effect is markedly more pronounced on blacks. A closer look at the data shows ever-greater percentages of black students borrowing more and more funds.

What's going on? As it turns out, the answer may lie not with income, but with wealth.

"Wealth matters in a family's ability to pay for college," David Bergeron, vice president for postsecondary education policy at Center for American Progress, told Mic, saying that even financing his own daughter's education would have been a severe hardship without years of wealth accumulation. "It would have been difficult to pay out of current income."

Since colleges often require large lump payments, having a high family net worth is a strong indicator of one's ability to attend college, and the picture is starkly unequal. In 2013, the median net worth of white households in the U.S. was $141,900 while for blacks it was $11,000, according to data from the Pew Research Center. While both groups suffered during the Great Recession of 2008, the affect was far sharper for blacks than for whites.

Nationally, the data demonstrates a vicious cycle of debt eroding future wealth creation, which can lead to more debt for future generations. According to a report by the think tank Demos, the effects of exorbitant student debt can linger long after college, with the average debt burden potentially costing grads more than $200,000 of lifetime earnings. Most of that comes out of future retirement savings and home equity, with wealth lost greatest for homes with above-average debt.

"We have used expected higher education as a social equalizer in the United States. If there are gaps by race or ethnicity ... then it can't fulfill that mission," Bergeron told Mic.

In another time, access to educational opportunities was one of America's biggest draws for ambitious immigrants who dreamed of a better life for themselves and their children. Yet as a college degree become increasingly unreachable, the U.S. runs the risk of turning its back on that legacy. If the next generation of strivers can't make it in the U.S., they'll go elsewhere, and all Americans will be poorer for it.