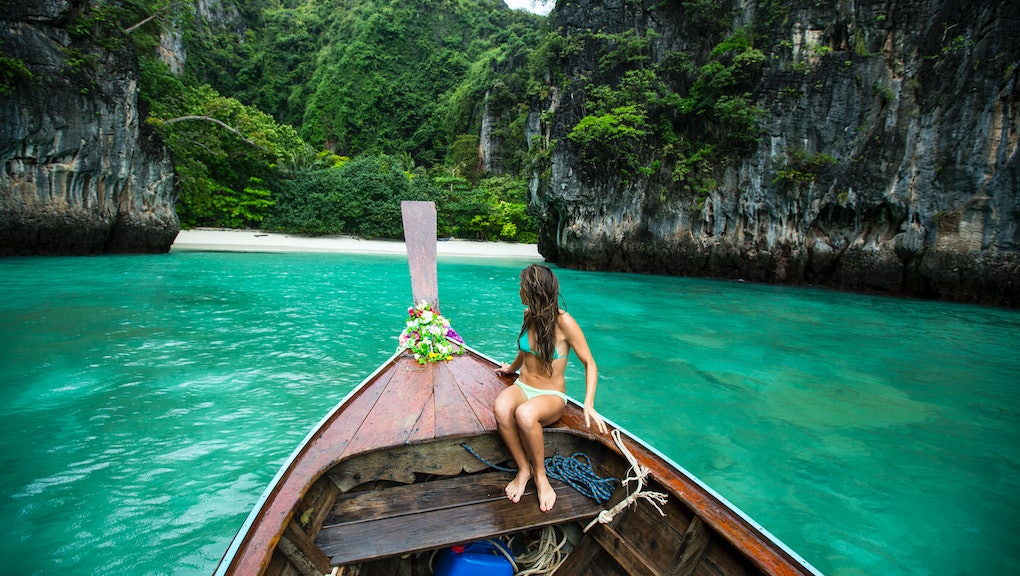 What Our Newfound Wanderlust Obsession Really Says About Us

"I quit my job today. (And so can you!)" reads a headline on a recent Medium post by Sarah Knight, who left her 15-year-long career at a major publishing company this week. "What I really want more than anything else is to be happy," she writes.

Does that sound familiar? It's a sentiment being passed around in a recent rash of personal essays featuring millennials giving up their high-powered careers for a simpler, slower existence, trading power suits for bikinis and 401(k)s for "Don't worry, be happy"s.

But instead of fixating on the fantasies or tossing them aside as privileged nonsense, our collective obsession can reveal a more attainable need — some space to slow down, breathe and find happiness that isn't based on salary, spreadsheets and promotions.

The "eat, pray, love" fantasy: The wanderlust narratives tend to have a few things in common: disillusionment with the status quo, a huge career risk and a grand adventure following the big leap.

"I spent my life staring at screens: laptop, cell phone, iPad — hell, even the taxis and elevators had televisions in them. I felt stressed, uninspired, and disconnected," Noelle Hancock writes in a viral essay for Cosmopolitan about how she left her $95,000 job for a life scooping ice cream on St. John in the Virgin Islands. "If you're constantly thinking you need a vacation, maybe what you really need is a new life."

It's the same view 26-year-old Alexandra Jimenez took when she left behind a fashion career in Los Angeles for a nomadic lifestyle. "You really don't need as much to be happy as you think you do," Jimenez, who has been to more than 40 countries, writes for Cosmopolitan. "The knowledge that you have the freedom to design your own life is incredibly freeing."

And it's the same New Age-y outlook of people like Rebeca Dinerstein, who spent one year living in the Arctic on a poetry grant, or Nancy Broden and Michael Fortson, a couple who traded their tech careers for a life on the road in an Airstream (or Blaine Vossler and Mackenzie Edgerton, who essentially did the same).

In each case, people were successful and driven, until they reached a breaking point.

The perpetual pressures: We wouldn't all fawn over escapism if there wasn't a harsh, demanding reality to escape from. With a national average wage of $44,888 as of 2013, an average 6.1 hours of sleep a night and more and more professional jobs that demand over 50 hours a week (not to mention those mandatory midnight emails), the state of the average American worker is one that is perpetually busy, on-the-go and yes, on the brink of burning out.

Still, salary, achievements and "settling down" remains markers of cultural achievement. A 2014 report from Strayer University found that it's Americans with a college degree, strong work ethic and a household income of $50,000 or more that consider themselves the most successful.

And we nurse self-doubt when we feel we're failing to meet those benchmarks. "I don't know who my peers are because people my age either seem to have established careers or parental support, whereas I feel like I'm clawing tooth and nail without either and getting nowhere," Cody, 27, previously told Mic.

"I fixate on these stories because these are people who have stopped defining their lives by their careers, which is something I think we all do," Theresa*, 26, who has only contemplated moving abroad to Europe, told Mic. "I daydream about that stuff, until I think of my job."

"These people are leading five lives in one," Seth*, 29 with a corporate office job, told Mic. "I guess I want that."

But for all the attention and sometimes-praise these wanderlust essays get, they're also met with judgement and a dash of bitterness. Not everyone receives a grant to go write poetry, has a husband "who does well," can turn a profit off a travel blog or make due scooping ice cream on a remote island. Most wanderlust stories are highly privileged — a path, ironically, that only someone who's already met the conventional markers of success could follow.

The unrealistic nature of such nature adventures make us quick to toss them aside just as quickly as we click on them. But before we roll our eyes or sigh deeply and close the tab, there is something more realistic to be gleaned. We could all use to find some happiness that isn't tied to salaries or LinkedIn and, quite possibly, taking those vacation weeks we've been putting off.

While not all of us can ditch it all and make way for Ecuador, we can take a second, recenter ourselves and think about what actually makes us happy. We may not have to quit anything to discover it.