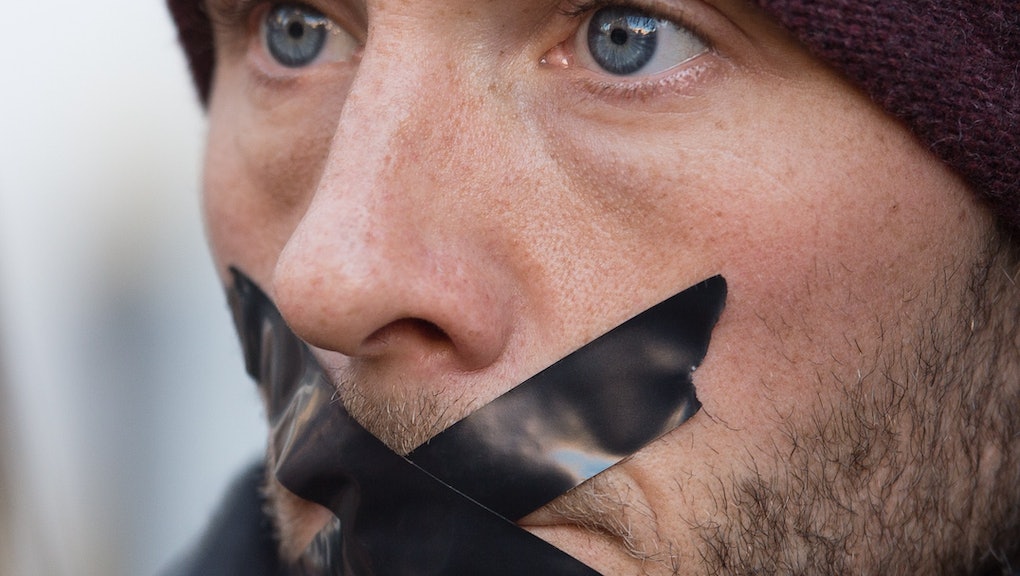 Reddit just shut down five forums that had become breeding groups for trolls. It's a major step forward for curbing harassment on the gigantic social media platform. Naturally, some users are furious over it.

On Thursday morning, the front page of Reddit was covered with profanities and swastikas as people hurled vulgar, misogynistic insults at Reddit CEO Ellen Pao, calling for her resignation.

Angry users had one unifying cry: "censorship." They claimed their right to free speech was being suppressed.

The trouble with their argument? That right doesn't exist — not like they think it does, anyway.

The reason so many people don't like the idea of a social network putting limits on hate speech and harassment is they believe it infringes on their constitutional right to free speech.

The Constitution, as most people know, is a list that restricts what the government can do. Websites like Reddit and Twitter, however, are businesses. Their leaders can decide at any time what speech stays or goes. It's as simple as that.

On Wednesday, Twitter also announced a new feature: shared block lists, a "community-driven" way to silence trolls en masse. Users reportedly cried censorship over this tool as well. But as the xkcd comic above demonstrates, having your abusive speech blocked is vastly different from getting arrested for what you say — which is actually what the First Amendment protects you from.

Should Reddit curb harassment at all? When Reddit bulldozed /r/TheFappening, a subreddit created to distribute stolen celebrity nude photos, Reddit's then-CEO, Yishan Wong, published a statement called "Every Man Is Responsible for His Own Soul" with the tag "Government 2.0." The post was meant to explain "why we will not ban questionable subreddits." Essentially, Wong defended the community's right to be awful and Reddit's right not to intervene.

"The reason is because we consider ourselves not just a company running a website where one can post links and discuss them, but the government of a new type of community. The role and responsibility of a government differs from that of a private corporation, in that it exercises restraint in the usage of its powers."

It sounds grandiose for Reddit to declare itself a government, but it's not an inaccurate comparison. You could think of Reddit as a territory comprising 172 million people, the number of last month's unique visitors. If Facebook and its 1.44 billion monthly active users were a country, it would be the biggest country in the world. Reddit's main focus is its community, and its leaders are demonstrating a commitment to keep their citizens happy and productive.

As Reddit's admins wrote in a May 14 blog post announcing an anti-harassment initiative, "We value privacy, freedom of expression, open discussion, and humanity, and we want to make sure that we uphold these principles for all kinds of people."

But Reddit is not a nation or a government. It's a business whose primary value is fostering productive discussion. As a business, it has the power and an obligation to control these discussions. And since Reddit was first launched, it has.

As T.C. Sottek wrote in the Verge:

"The great irony in all this hair-trigger martyrdom is that Reddit has always been friendly to censorship. For most of the site's history the most meaningful rules were created and enforced by its community moderators, who could be anyone that decided to create a subreddit. Reddit moderators have censored all kinds of material, including reputable journalism."

"As a matter of law and policy, we don't want to be in the business of telling private businesses what they can and cannot censor," civil liberties lawyer Marjorie Heins told Wired. "On the other hand, these companies have a lot of power, arguably more than governments, about what information we have access to."

On Wednesday, Reddit used this power for good. Admins closed down subreddits largely criticized for being hate-speech hubs, even as a vocal faction of the community revolted.

Reddit is Pao's site, and she has the right to ban whatever and whoever the hell she wants. That she explained why is mere graciousness.