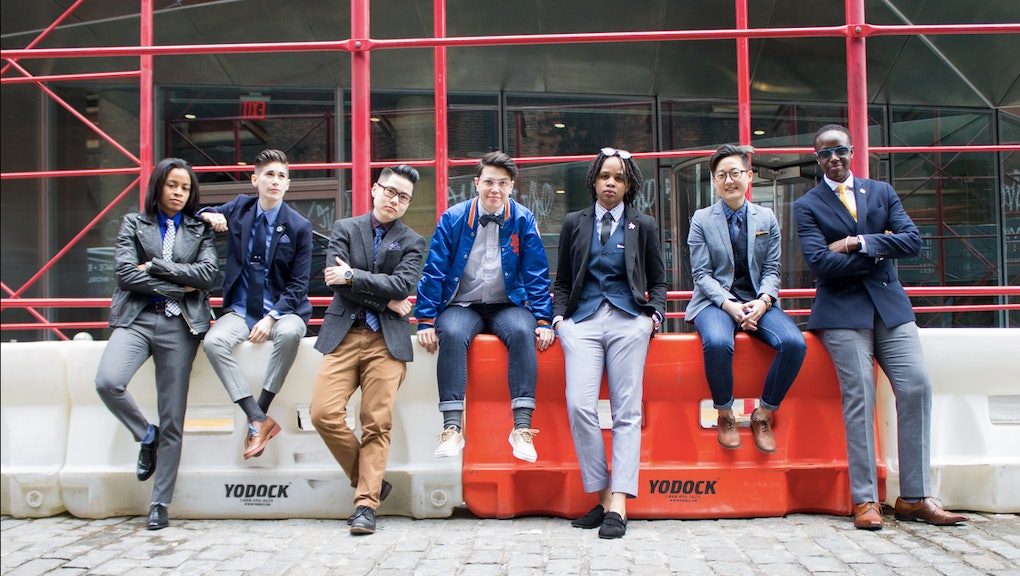 Where Are Men Getting Their Clothing Advice? From the Women Who Are Wearing It

These are the Dapper Chicks:

They're women in New York who have found a place in the heart of thousands who follow their Instagram and blog. The informal coalition of seven dress exclusively in menswear. Think suits, ties, Oxford shoes and the perfect pocket squares.

Their initial intent was not to offer fashion inspiration for men, said Ariam "Sara" Geffrard, founder of A Dapper Chick. Geffrard and fellow Dapper Chicks member Danielle Cooper, of She's a Gent, were both building Instagram presences when they started getting noticed for their unapologetically male aesthetic. After gaining followers on Instagram, Cooper and Geffrard teamed up last year to launch The Dapper Chicks.

"We're confident. We're not trying to be something different, but this is just who we are," Cooper told Mic.

The start, however, wasn't totally smooth. Cooper told Mic that she was initially questioned by people didn't get the rationale behind a woman dressing in men's clothes. Geffrard told Mic she was directly cyberbullied on her Instagram account.

"I was feeling very depressed, kind of always like watching over my back," Geffrard said. "I wasn't sure what to expect and most importantly, I just wanted to stop the blog." That experience played on fears that she'd had early on that as a woman wearing menswear in a very masculine way, others wouldn't be accepting, she said.

But those experiences inspired Geffrard last September to reach out to Cooper for support. Together they formed the Dapper Chicks, which is now a seven-woman strong gaggle that celebrates great-looking clothing, and also fights for meaningful causes such as anti-bullying and women's rights.

But it's the clothes that actually act as the greatest unifier.

These women aren't the first to dress in menswear, and the fashion industry today is expanding to include more gender-fluid clothing options for every preference. There are blogs devoted to dressing like a tomboy, and sites like dapperQ which describes itself as "the premier style and empowerment website for masculine-presenting women, gender queers and trans-identified individuals."

Originally, Geffrard's gender identity was part of the appeal to followers who identified as part of the queer community, who looked to her for inspiration. That's changed over time, though, with her fan base growing to simply those who are passionate about men's fashion.

Which, it turns out, includes a lot of men.

"To be honest," said Geffrard, "that's not the audience that I thought I was going to reach. but I have and I'm so grateful that I can inspire both men and women to dress well."

A look at their Instagram followers reveals a number of men who frequently leave supportive comments and "likes." Geffrard and Cooper also both told Mic that they receive emails and direct messages on Instagram from men who ask them for actual fashion advice. This past spring, dozens of their male followers attended a meet-up during New York Fashion Week which hosted the pair, many wearing the same attention-grabbing staples the Dapper Chicks do.

"We're in love with this style and we want to find a way to share it," said Cooper. "Whether it helps a man or a woman along the way, then that's great."