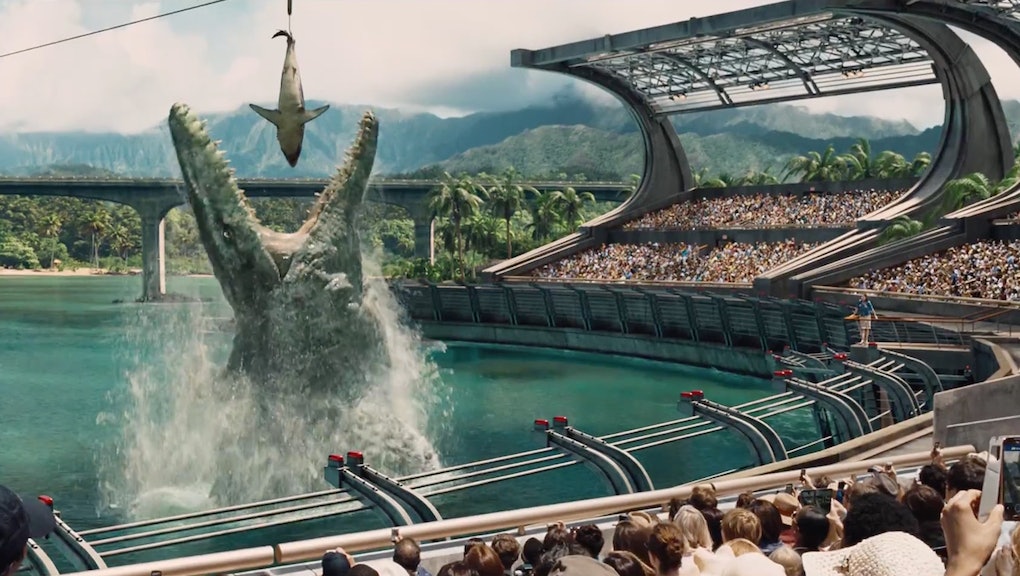 Can a problematic movie just be enjoyed for what it is?

Through all the trailers and clips released during the run-up to Jurassic World's debut, one constant has emerged: This movie looks truly, completely exhilarating.

Yes, reviews for the film have fallen into good-not-great territory, and there have been major criticisms of the movie's treatment of women. These are important issues: A blockbuster in 2015 should do better by its female characters.

But then there's the shot of the Jurassic World park opening up:

It's beautiful, full of wonder and excitement at what could be behind those giant doors. Who wouldn't want to visit Jurassic World? The shot opens you up to quite the sucker punch, too, when the horror of a dinosaur escaping and hunting you down dawns on you.

If Chris Pratt can't avoid a bloodthirsty dinosaur, how could we, the lowly audience members, be expected to do the same?

Summer is the perfect season for the popcorn movie — a film that doesn't have to cross the same bar as the kinds of movies that are up for awards. It's always great when they do surpass expectations, of course. We all loved Mad Max: Fury Road for being the thinking person's action movie, filled with feminist themes and surprisingly great story ideas.

Jurassic World looks to be substituting all that with lots of shots of giant dinosaurs.

No one will accuse Jurassic World of being too sophisticated.

It's easy to get wrapped up in action movies like these. You think you have level-headed criticisms, want to approach it in the most civilized, calm manner possible and then, oh my god, Chris Pratt is riding his motorcycles with the dinosaurs! How cool!

Think of Jurassic World as the movie you like but don't respect. It's similar to Pitch Perfect 2 in that way. The movie itself is uncreative. It's derivative of the first movie (Jurassic Park or Pitch Perfect). There's major problems with its storyline. Yet it's two hours to sit back, relax and enjoy the ride.

A cool factor can forgive a lot in the moment, but you shouldn't forget the problems either. We should push blockbuster films to be better. They should have actually developed female characters, more original storylines and a sense of ambition.

Jurassic World is not going to be that movie. It should be held up as an example of what to avoid in the future. But that shouldn't stop audiences from having a good time in theaters this weekend.