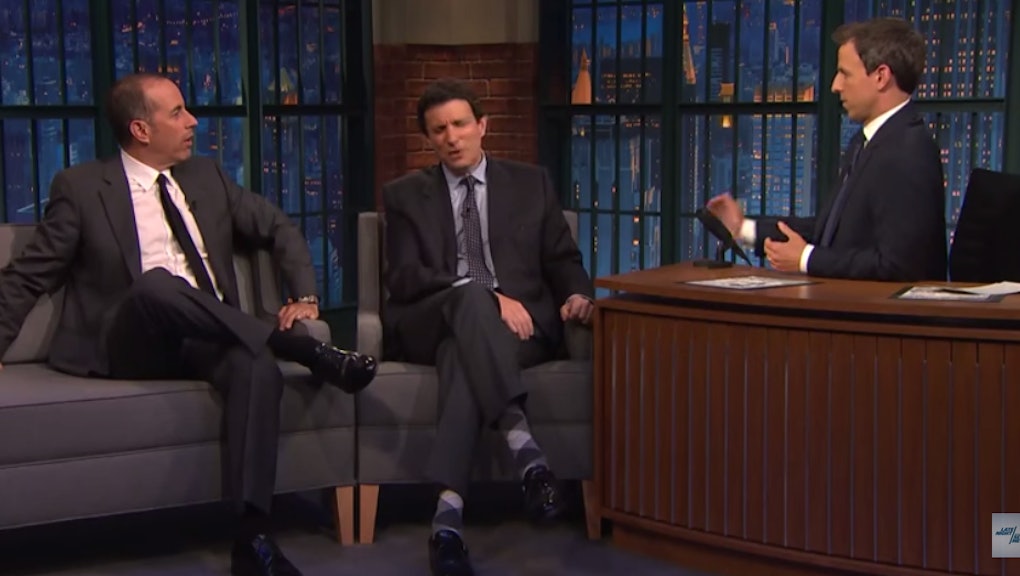 It's something, though not as painfully ironic as it might have been. Seth Meyers, host of Late Night, serves as a balanced moderator. David Remnick speaks candidly and measuredly about his capacity to "screw up" as editor-in-chief of the New Yorker. But the main event, Jerry Seinfeld, makes it all worthwhile — managing to both express genuine bafflement that people don't find his "gay French king" jokes funny, and to unironically use the word "creepy."

Seinfeld has been on a roll lately, having recently publicized his refusal to perform at colleges anymore because "they're so PC."

"They [college students] just want to use these words," Seinfeld said on The Herd with Colin Cowherd earlier this week. "'That's racist.' 'That's sexist.' 'That's prejudiced.' They don't know what the hell they're talking about."

"These words." So inconvenient. It's almost like people are allowed to have opinions about Seinfeld's comedy that aren't dictated by Seinfeld. It's almost as if Seinfeld has to deal with shifting audience tastes as time passes. In other news, yet another white male comedian fails to see the irony of being oversensitive to what he indignantly dismisses as other people's oversensitivity — "other people" typically meaning women, people of color, LGBT or gender-nonconforming people.

Nobody said being a comedian is easy.

Seinfeld's problem is not unique, of course. As recently as January, in a widely trafficked article, New York magazine's Jonathan Chait lambasted "political correctness" as an alienating and ultimately destructive force in the "liberal" movement. Thinkpieces and personal essays about college professors charged with Title IX violations and creating "unsafe" environments for their students after making controversial (and sometimes not so controversial) statements can be found on most news sites.

But in many of its iterations — especially in comedy and entertainment — today's panic over supposed political correctness misses a key point: If a marginalized group feels marginalized by your content, maybe the problem isn't them. They are part of your audience, after all. And standing onstage with a microphone doesn't mean they're required to accept every word you say.