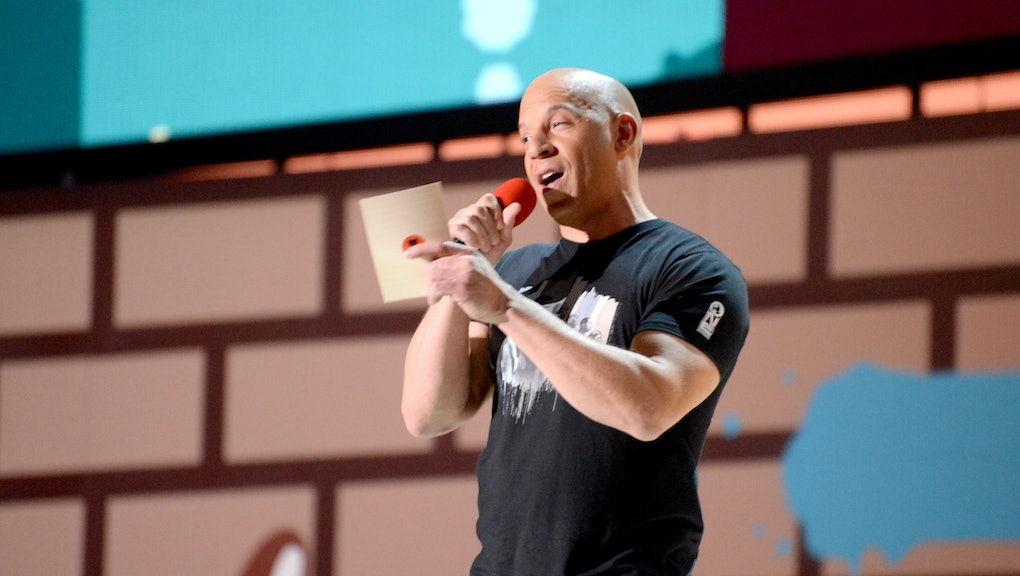 Afterward, Diesel clarified to People magazine the song was a tribute to his girlfriend, Paloma Jimenez. What was just meant as a romantic gesture, however, turned into much more. For his part, Diesel took it in stride.

"People say 'I didn't know you were a Rihanna fan?'" he told People. "How could you not be a fan of her voice, her gift?"

Since then, Diesel's carved out a strange niche for himself: the studly, all-man movie star who also enjoys a little karaoke ballad here and there. It may be bizarre, but there's something kind of wonderful about the whole thing.

Perhaps the appeal is in the visual of The Fast and the Furious' marquee star so earnestly warbling through "The Christmas Song." This isn't something Diesel is doing as a joke, or as an ironic play on his image. He is genuinely just singing his heart out, limited vocal range be damned.

The giggle-worthy trend took a more somber turn, however, when Diesel began performing the Furious 7 soundtrack single "See You Again," originally performed by Wiz Khalifa and Charlie Puth. The star's performances were meant as tribute to the late Paul Walker — and they were lovely remembrances indeed, especially his most visible rendition at the MTV Movie Awards.

Again, the earnestness is what makes this work. Any silliness created by the strange juxtaposition of performance and performer is negated by his genuine spirit. It helps one rethink what the power of song really is. It's not always about who has the best voice or who's singing the best track. Often, the true soul of a song lies within the performer as they bare their true selves.

It's not weird or odd of Diesel to do. It's quite beautiful.

When Diesel sang a karaoke rendition of Tove Lo's "Habits (Stay High)," he captioned the corresponding Facebook video post, "The ever continuing process of healing." This is his chosen way of processing his emotions, from expressing his love to his girlfriend or grieving his deceased friend. In sharing his process with fans, he's giving them an outlet to express their feelings.

So while it may be an unusual habit, it's one we don't mind sticking around. Diesel is, intentionally or not, doing a great deal of good for himself and others with these songs. They bring the tickle of a giggle at the initial absurdity, plus an even greater sense of warmth at his gesture. It's some pretty powerful stuff — and we love Diesel all the more for it.