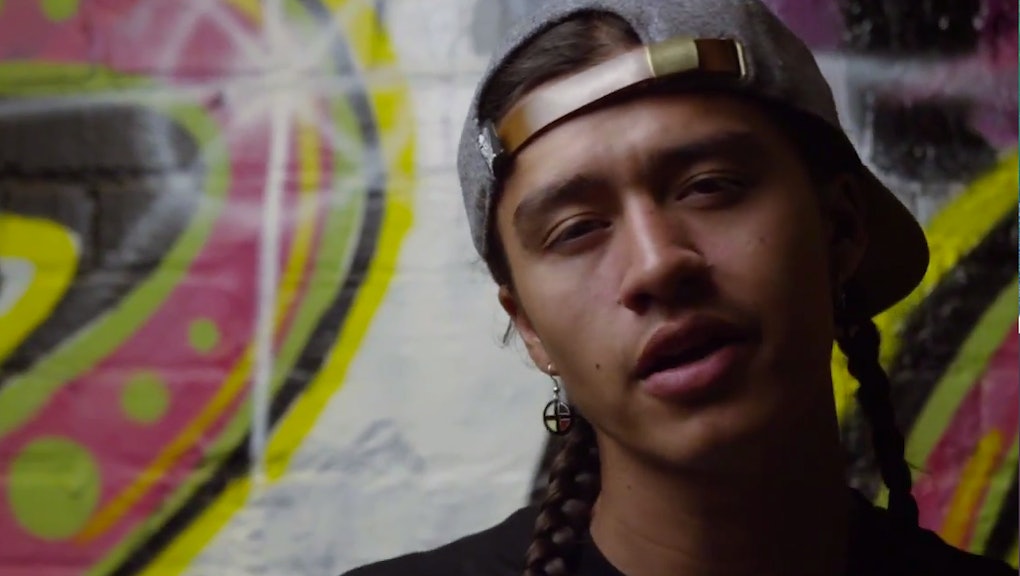 Sicangu Lakota rapper Frank Waln is a true revolutionary. For years, the 25-year-old MC has been using his unique and urgent blend of hip-hop, which draws inspiration from the tribal music of his home on South Dakota's Rosebud Reservation, to direct attention to the most pressing issues facing indigenous communities today.

With his mic, he's battled degrading stereotypes, fought for indigenous visibility and campaigned against the environmental challenges his people face. He recently gave MTV a window into his activism, appearing on the second season of Rebel Music. On his upcoming full-length debut he's looking to take fans even deeper. The project is shaping up to be his most personal yet.

Mic: I hear you're working on a new album. Tell us what people can expect.

Frank Waln: It's been a really intense time. I've been traveling a lot for shows, doing workshops. This is my first legit solo album, it's going to be special for me. I kinda have a title. It's in my language, Lakota, and I need to run it by a few more elders before I share it. I'm asking permission and making sure I'm using the phrase and the words in the right way.

It's gonna be my story of coming to terms with being a Lakota person, born on a reservation in South Dakota. Born with all this historical trauma and baggage, unfortunately descending from ancestors who survived genocide, and our whole history of colonization. That's still happening. When I was younger, I didn't realize that. You're just born into it. Then I got older and found music and found my voice and found my strength and realized my greatness, realized that I descended from greatness. And I stepped back and was able to look at the whole picture of my reality, how it was shaped by this colonization, and then how I healed from that.

Some of these songs are pretty painful, but you know, that's part of the healing process. Hopefully, people who are going through something similar can use it as a framework for those who are living similar circumstances.

Mic: Going to get approval from your elders to use that phrase for your album title — is that something you've done before? Have you ever run a song by your elders or anything for approval?

FW: I've never called a entire project a Lakota name or Lakota phrase. But I've done similar things. When I come up with phrases in songs, I want to double-check because I'm not fluent in my language. I grew up not speaking it. Everything has been a result of the boarding schools and the fact that the government tried to get rid of our language and kill off our culture. So my generation is living with the aftermath of that. But the beautiful thing is there are efforts now on my reservation and in different tribes across the nation to try to revive the language.

FW: My end goals were the same, my priorities were the same, but I wasn't doing it right at first. Basically, when I chose to be a doctor, I graduated from high school, valedictorian of my class, I got a bunch of scholarships ... I had this amazing opportunity. And I always knew that I wanted to help people and I wanted to heal people. My whole life, I've seen people that I look up to, people that I love, people that raised me, helping people. So I have that within me. When I got this scholarship, I thought the only way I could do that was to be a doctor.

It took me a couple years to figure out what was in my heart. I was making music since I was a kid. I didn't realize the greatness of my gift, the greatness of my style. I hid it. I didn't believe in it. And it was after I hit a little rock bottom point in my life. I was depressed, I was going through a lot of things, and I decided to just do what I love.

Mic: Talking about the Rebel Music doc with MTV, we actually spoke to Inez Jasper. Towards the end of the episode you said that "people are paying attention to the indigenous cause more than ever." What do you think is driving that?

FW: Social media and the Internet have been pretty huge for us, because now we're able to get our voices out. Before, we didn't have a platform to get our voices out there, get our art out there and just speak to the world. A lot of what mainstream media portrayed of indigenous people is very stereotypical, one-dimensional; it blanketed all indigenous tribes as one tribe. It's a very false representation of who we are as a people.

Now that we have social media and the Internet, we can create our own media. Not only for getting our stuff out there, but also for communicating between each other inter-tribally. When [colonizers] put us on reservations, they cut off all these lines of communication that we had between tribes — we traveled, we shared stories and we were strong because of that, we were organized. Now social media is an amazing tool to re-establish that as indigenous people across the world and join our voices. Because together, our voices are strong.

Mic: What are some of the biggest misunderstandings or misconceptions that people have?

FW: Oh man, I could be here all day, dude. [laughs] Unfortunately, I met a lot of people who were just really ignorant, thinking that we're gone, or we're a people of the past, that we're a static culture, our culture doesn't grow or evolve. That's when I started paying attention to who's telling our story. Why do people believe this about me and the community I come from? I saw that it was non-native people telling our story, giving a misrepresentation of who we are. And I was like, "I want to tell my story. I'm going to tell people about where I come from and use my music for that."

People also think we get all these free handouts and we have all these entitlements, which is actually really false. This entire country belonged to indigenous people, all the land, we lived here before the United States existed. And they took it all from us and tried to kill us and that resulted in us living in some of the worst conditions in the country.

For myself, I do come from one of the poorest counties in the country. I do come from a place that struggles with poverty, and that is part of my story. But that isn't the only story, you know? When outside media sources come in, those are the only stories that they extract. So for a lot of the world, that becomes the story that defines us as indigenous people.

For me, I just try to provide a balance. Tell the beautiful stories, tell the hopeful stories as well, because there's so much beauty in our communities and there's so much hope. There's people doing great work to bring about change in my home community. For the most part, the world isn't going to hear those stories. As my platform grows, I hope to try to amplify those voices and those stories.

Mic: Ultimately, what is the impact you hope your art has?

FW: I've been asked this question a lot, and this past year I've added some new stuff. But bottom line is, people ask me why I talk about the things I do, why I make music about these things — I say I just want myself, my family, everyone I love, my tribe, all indigenous people to be happy, healthy and respected. Hopefully my album and my work will provide a blueprint or a framework for people to heal. And the world can realize that we're human beings. With everything I do, I'm working towards that.

This interview has been edited for length and clarity.