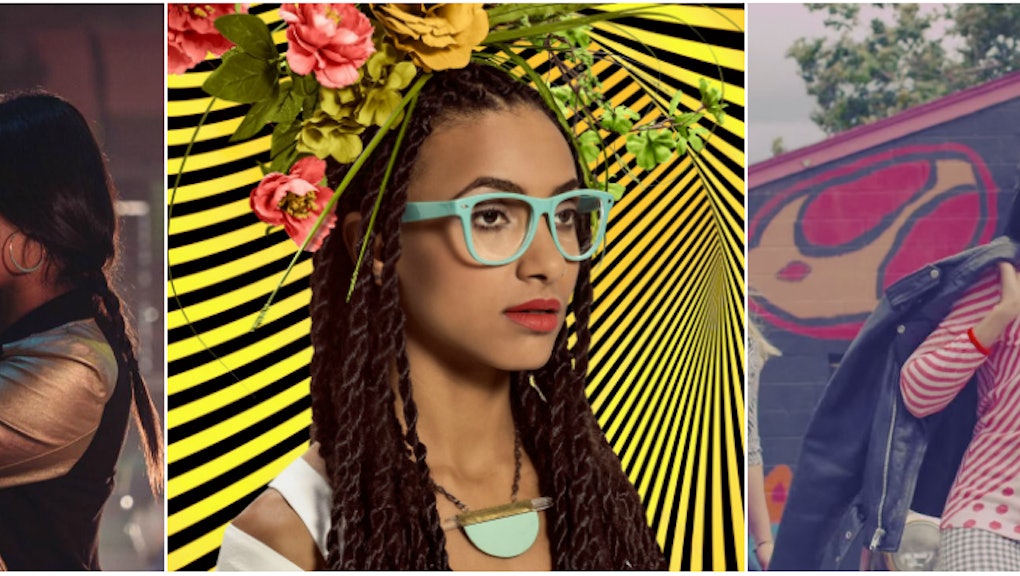 When you ask most people about popular Latino musicians, you'll probably hear a lot about Shakira and J. Lo. Latinos, who made up 17% of the American population as of 2013, have a varied palette when it comes to music (salsa, cumbia, reggaeton, rock). Yet unless Latino artists make American-sounding pop, they're always relegated to Hispanic outlets and never the American mainstream. It was just this year that Juanes, the Colombian rock-pop superstar, performed a song in Spanish at the 2015 Grammys — the first time anybody had done so in 10 years. That kind of lack of diversity explains why a lot of popular American music literally sounds the same.

Hispanic music has far more to offer. Women always seem to get the worst of it because, unless they play up the sexy Latina role, they have a hard time breaking through. Here's a list of 11 incredible Latina musicians who deserve the spotlight as much as anybody.

1. Jessica Hernandez and the Deltas

"I love jazz, I am dating a California surfer, I have Latin parents, an obsession with the circus, and a weird musical past. All of these things play into the sound and what inspires me," Jessica Hernandez told That Mag about her singing and songwriting with the Deltas.

The half-Mexican, half-Cuban, 100% Motor City badass has been doing a great job leading the bluesy, psych-surf soul outfit with her powerful, cutting voice. The band started growing their fanbase with the release of 2010's Weird-Looking Women in Too Many Clothes, their debut EP, and they're currently touring in support of Secret Evil, their latest LP.

Liliana Saumet, lead singer of the phenomenal Colombian electro-cumbia band Bomba Estéreo, is one charismatic performer — and a snazzy dresser. Having played many of the big-name festivals (Coachella, Bonnaroo, South by Southwest), Bomba Estéreo regularly performs in the U.S. Sadly, their catchy, dancefloor-shaking tunes will probably never be played on the radio or any mainstream outlet. Perhaps things will change with Amanecer, their latest release, which was produced by Wallpaper's Ricky Reed.

Only a handful of vocalists can go back and forth between English and Spanish in an effortless manner, and Karen Freire, lead singer of the Brooklyn, New York, and Minneapolis-based Buffalo Moon, is one of them. The band's style oscillates between surf rock and soft, dreamy ballads with a hint of Brazilian flavor.

Machista, Buffalo Moon's last LP, tackles a well-known problem in Latino culture: aggressive relationships. "'Machista' is about a woman walking away from a bad relationship and being strong enough to do so," Freire told Reviler of the title track. "This especially speaks to me because of the cultural background I come from. There's lots of machismo in South America and I know a lot of women who are afraid of walking out of a situation like that."

Finding jazz bassist Esperanza Spalding on this list should shock no one. Her absence on mainstream radio is more a product of genre than ethnicity — jazz simply doesn't get the attention it deserves. However, having racked up four Grammy Awards — including the Grammy for best new artist — the Portland, Oregon-based extraordinaire has quickly gained a jolt of attention (Prince and President Barack Obama are among her fans).

Thankfully all the newfound attention doesn't faze Spalding: "High-level fame — I don't think there's any value in that, in and of itself. For what any artist is striving for, artistically, high-level fame doesn't translate to improved productivity, improved connectivity in their art."

French-Chilean rapper Ana Tijoux makes the kind of club-banging music one could easily pair with M.I.A. or Missy Elliot. Drop "Somos Sur," one of Tijoux's latest singles, at any hipster party and watch the crowd go crazy. Mind you, Tijoux has been making music since the '90s, and Vengo, her last record, garnered quite a bit of attention from publications like Spin, NPR and Newsweek.

How did the Brooklyn-based Buscabulla, who's only been around for a couple of years, win the chance to work with in-demand producer Dev Hynes (Solange, Sky Ferreira, Florence and the Machine)? By beating out 5,000 other bands in a contest sponsored by Converse and Guitar Center with their beautiful, elegant songs. The Boricua project, which is led by Raquel Berrios, even caught the attention of Interview.

"I like to take these male Latin genres — Latin culture is known to be very male and chauvinistic," she told the magazine. "And I like to turn it around and put it in a new context."

One of the most unique bands on this list is Kumbia Queers, an all-girl cumbia-punk group based out of Argentina and Mexico. Unique because, as evidenced by the track record of the big cumbia bands (Sonora Dinamita, Los Angeles Azules), women in cumbia never play instruments and mainly stick to singing, whereas Kumbia Queers write and perform most of their music. They're also genuinely good, and their songs can be both politically conscious and fun (for proof look no further than this cover of Nancy Sinatra's "These Boots"). Their latest LP, Canta y No Llores, came out at the end of May.

She initially garnered some attention while fronting Los Abandoned, a rock band based out of Los Angeles, but recently María Del Pilar has been releasing her own solo records. Songs + Canciones, her latest, showcases Del Pilar's various influences and quirky pop stylings, the kind that would would make David Byrne proud.

Calling California home for many years, the Chilean-born singer has not forgotten her roots. Recently Del Pilar was asked whether she felt more Chilean or Chicana, to which she responded, "I'm a Chilana, a Chilean-American, a mix of both."

Destiny Frasqueri is the Puerto Rican artist responsible for the vocals on Princess Nokia, an experimental electronic project based out of New York City. It was only recently that Vice released Metallic Butterfly, their first LP, but Destiny has been turning heads since her days as Wavy Spice. The record mixes the trip-hop weirdness of Portishead and plenty of other '90s chillwave projects, but don't peg Frasqueri's work to anything. As she told Paper magazine, she's "obsessed with individualism," and "the idea of being like everyone else killed me inside."

The classically trained vocalist Denise Gutiérrez was born in California but grew up in Mexico City, where she met the rest of the members of Hello Seahorse! Pitchfork called them "the continent's most exciting current young groups" — but why limit them to one single continent?

When asked about the American media attention they were receiving, Gutiérrez told Remezcla, "I think all music can be international. Language isn't important. Of course, the words are very important, but the music itself is the most important. We played in California recently, and this guy came up to me and asked if I spoke English. Then he told me, 'I love your music. I don't know what you're saying, but I just felt it so near to me.'"