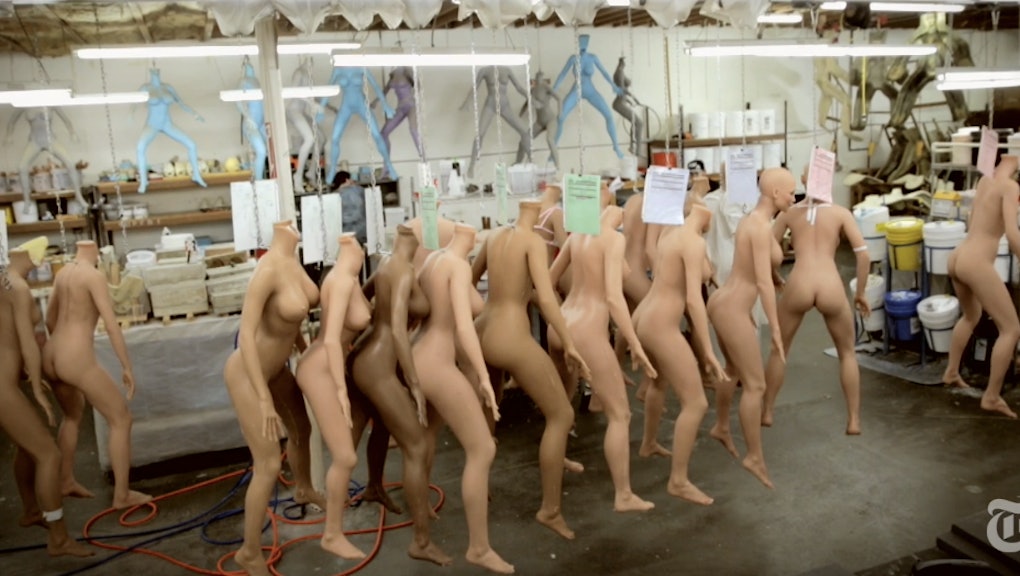 We're Finally Getting Sex Robots That Can Actually Talk to Us

Troubling news for anyone who's into authentic human connection: The sex robots are coming.

The New York Times reported Thursday that RealDoll, a California company specializing in lifelike sex dolls, is working on a version that can move its head, blink and even have intelligent conversations with users.

"The hope is to create something that will actually arouse someone on an emotional, intellectual level," RealDoll creator Matt McMullen said on-camera for the New York Times' "Robotica" video series. "Beyond the physical."

Or, as an animation of a doll put it in the video, "I dream about knowing the meaning of love."

The New York Times reported that the dolls will end up costing anywhere from $30,000 to $60,000. (Mic has reached out to RealDoll for comment.)

As strange as all of this may sound, there may be a market for these dolls. A 2014 report on Artificial Intelligence from the Pew Research Center surveyed 1,896 experts on robotics and labor, and researcher Stowe Boyd concluded that by 2025, "Robotic sex partners will be commonplace, although the source of scorn and division."

The fact that there's even any interest in realistic sex dolls for both physical pleasure and intelligent conversation suggests that many who claim to "just want sex," want a little bit of human intimacy along with it. After all, as science and experience has shown us, communication about and during sex can affect just how pleasurable it is.

That such intimacy would be coming from a machine could be problematic at best and damaging at worst. When the topic of sex robotics came up at a 2014 relationship panel, Cindy Gallop, founder and CEO of MakeLoveNotPorn.tv, explained:

"In real life relationships, you're never going to be in control of everything, and that's the fun and joy of interacting with one another. It left me depressed, quite honestly. That's not the future of relationships I want to see. The depth and the power and the extraordinariness comes from the unpredictability of interacting with a human being and sometimes you get it wrong and sometimes you get it right."

McMullen, whose company was also profiled in the May 2015 issue of Vanity Fair, claims to be aware of at least part of this issue.

"A moving doll is different from, you know, a completely detailed-to-the-finest-skin-pore of a person and then making it move — for me, is a little bit off-putting," he said in the video. "If you keep it far enough away from super-realism, I think you're in safer territory."

He goes on to say, however, "I want to have people actually develop an emotional attachment ... to develop some kind of love for this being."

You know, when you're not off forming emotional attachments to real humans.