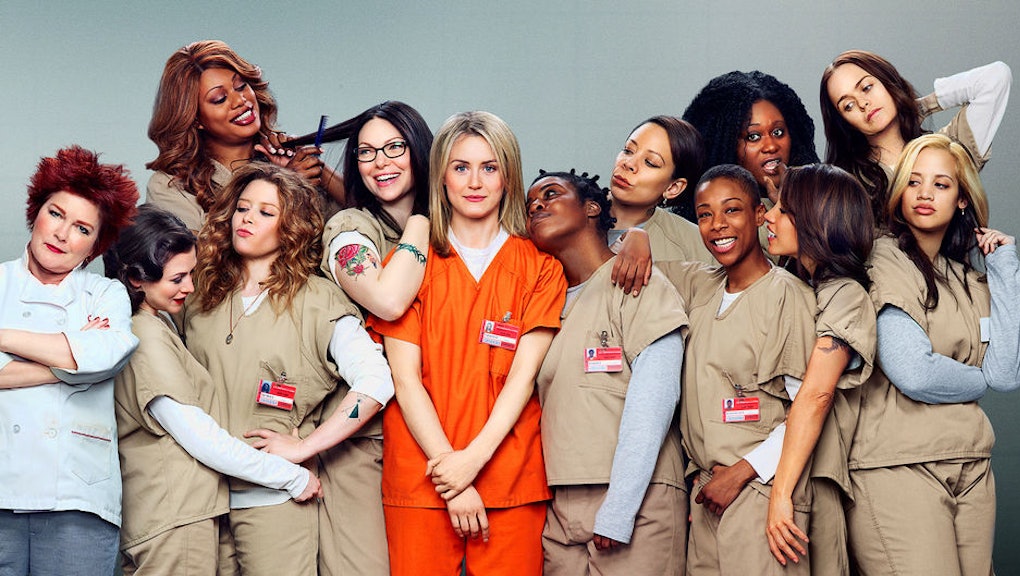 The mainstream media has finally caught on to something women have known for decades: There is immense power in female friendships. With discussions surrounding #SquadGoals and power femships dominating public discourse, the launch of the third season of Orange Is the New Black seems particularly well-timed.

OITNB is lauded time and time again for its diversity and for its sheer number of strong female characters, but it's the friendships of the show fans live for.

Here are six (of many) examples of the power of these incredible friendships.

1. Piper would have been swallowed whole by prison life, if not for Nicky.

Former high-society junkie, Nicky is a laid-back straight-shooter who seemingly should have little in common with uptight, fairly judgmental Piper. And yet, Nicky befriends and sticks up for Piper when few others will and, in doing so, makes her transition into prison life a little easier.

2. Taystee and Poussey have an unparalleled bond.

Perhaps the most iconic — not to mention inspiring and largely unparalleled — friendship depicted on OITNB is the one between Taystee and Poussey. Whether portraying Amanda and Mackenzie — their hoity-toity society women alter egos — or working together in the library, the two share an intimate, authentic bond.

It's the type of friendship rarely depicted in mainstream entertainment, which often relies on tropes of women competing or tearing each other down, and one almost never depicted as existing between two black women.

3. Daya wouldn't have been able to conceal her pregnancy.

Daya's pregnancy, a result of her relationship with C.O. John Bennett, could have been catastrophic. Should anybody have learned he was the father, he could have been imprisoned for rape since inmates don't have the legal right to consent. Daya's mother Aleida works alongside Gloria and Red, however, to come up with an alternative plan protecting Daya and Bennett. Their successful plan is the ultimate example of a community of women coming together to non-judgmentally help one of their own when she makes a mistake.

4. If not for Sophia, the inmates probably wouldn't take pride in their appearances — or themselves.

One might question why prisoners would need or even want a salon. But over the course of the show, it's clear that Sophia — Litchfield Penitentiary's resident hairdresser — doesn't provide a service of vanity, but one of dignity. She reminds the inmates they are valuable and therefore should take pride in their appearance and refuse to let the system wear away at their confidence.

5. Morello may have been written off as a crazy stalker.

Morello refers to her fiancee "Christopher" so frequently, it almost feels as if he is a member of the cast. Yet, the inmates notice, Christopher never visits. When it is eventually revealed Christopher is in fact a stranger whom Morello stalked, her fellow inmates don't berate or shame her: They treat her with compassion and understanding.

6. The younger inmates wouldn't have found the ultimate mentor in Red.

Whether she's helping her own, like Nicky, get clean after relapsing or smuggling in products from the outside world, Red has her girls' backs in a way both simple and meaningful. Furthermore, in the context of media that largely under-represents women over 40 — and typecasts them as mothers or largely subsidiary figures when they do appear — Red's role as a friend and mentor, as well as the emotional complexity she's allowed, is a major achievement.