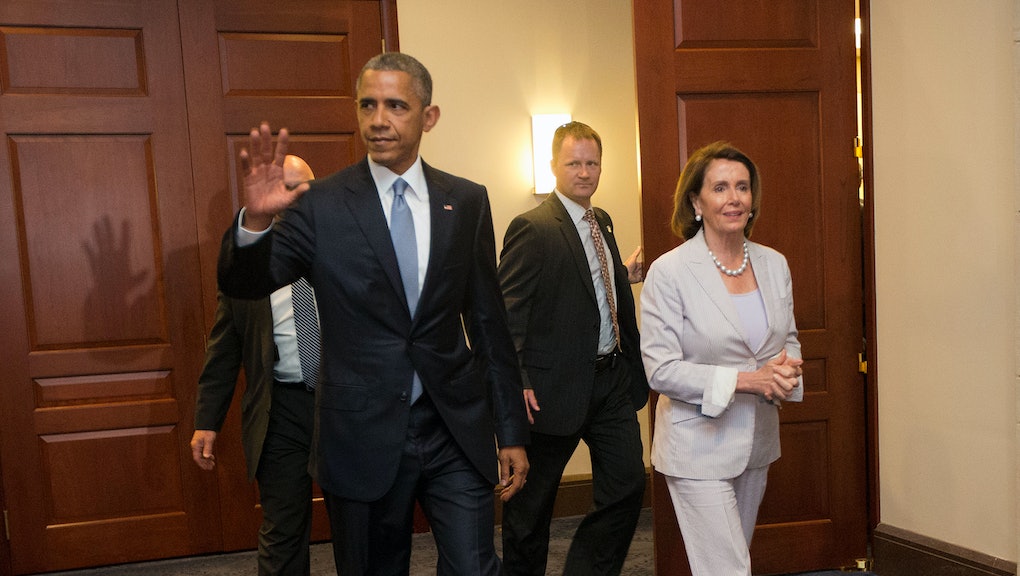 House Minority Leader Nancy Pelosi (D-Calif.) paved the way for her caucus to vote down a popular, worker-friendly program as a means of derailing a larger bill designed to deliver the president Trade Promotional Authority, or "fast-track" powers, in negotiating international trade deals.

The stalemate is rooted in liberal opposition to the Trans-Pacific Partnership, a pending 12-nation pact that could affect 40% of the global economy. Opponents, taking their cues from Pelosi and Sens. Elizabeth Warren (D-Mass.) and Sherrod Brown (D-Ohio), say the details of the agreement, which remain hidden from public view, would endanger the wobbly domestic labor market while further loosening regulations on multinational corporations.

In order to slow Obama's "fast-track," Democrats closed ranks to defeat a program called Trade Adjustment Assistance, which exists to provide support to labor markets dislocated by free trade programs. The final vote was 126 to 302, falling short of the 218 votes necessary for passage and dealing Obama a blow on his key policy priority.

Why Democrats opposed: "While I am a big supporter of TAA," Pelosi said on the House floor before the voting began, "I am prepared to vote against TAA because its defeat, sad to say, is the only way we will be able to slow down the fast-track."

Because the TAA and TPA passed the Senate as a package deal, they sink or swim together. The House will vote again on the TAA next week, giving the White House and Republican leaders a few more days to cobble together a bipartisan coalition to save the larger bill.

If the events of the past 24 hours are any indication, the Obama administration might have better luck focusing their attention on the House GOP. Their efforts to engage Democrats on the issue were considerable — a small army of administration officials marched on Capitol Hill Friday morning, and Obama himself met with Democrats on the Hill — but ultimately fruitless.

Key Pelosi ally and emerging progressive leader Rep. Keith Ellison (D-Mich.) sent a snarling tweet when the president and his team, who have traditionally kept their distance from the congressional rank-and-file, sought him out for a chat:

The big picture: Friday's defeat, though likely a source of personal frustration to Obama, who made a rare effort to stop by the annual congressional baseball game Thursday night at Nationals Stadium and schmooze members, highlights broader divisions within the Democratic Party.

Liberals in Congress and on the 2016 campaign trail have been steadfast in their opposition to any new free trade deal and openly frustrated by the White House's unwillingness to publicize its details. Obama, now allied with moderate Democrats and Republicans, argues the agreement would deliver new business opportunities to American firms while protecting middle class jobs.

Presidential candidates Sen. Bernie Sanders and former Maryland Gov. Martin O'Malley have openly opposed TPP, while Hillary Clinton, who supported it during her time as secretary of state, has been careful not to go on the record with her thoughts. Sanders has been sharply critical of Clinton's silence.

"I frankly don't understand how you could be a major candidate for president of the United States — Hillary Clinton, or anybody else — and not have an opinion on that issue," he said during an interview with Bloomberg Thursday.

With the next vote scheduled for Tuesday, Democrats — in Congress and on the campaign trail — will have a few more days to hash it out.