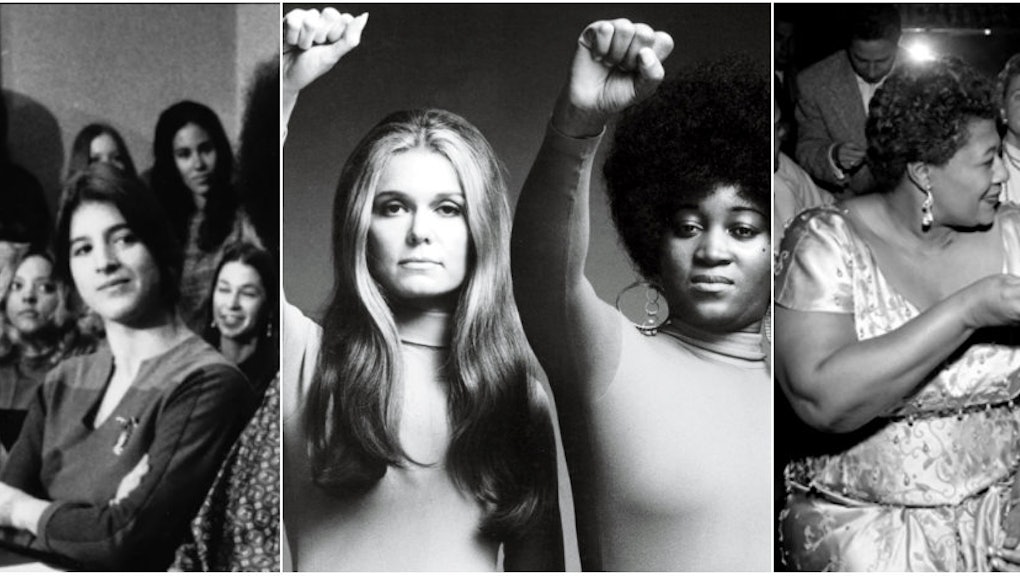 These Historic #SquadGoals Prove the Awesome Power of Female Friendship

This is the summer of #SquadGoals.

Whether it's Taylor Swift and her gaggle of model, artist and actress pals, Nicki Minaj and Beyoncé eating burgers with interlocking arms or the Sisterhood of the Traveling Pants cast brunching together, there's no shortage of enviable friend groups doing what squads do best. Scroll through the recently viral #SquadGoals hashtag, and you'll come across classic squad behavior: goofing off, partying and, of course, having the requisite group sleepover.

But repping your squad isn't only for the the likes of T. Swift, nor is it all about brunching. The historical women who rolled with crews had a blast while also killing it together and scoring serious accomplishments along the way. Whether it was activists, politicians or artists raising the bar for besties, these women form our #FBF #SquadGoals. Because nothing beats the feeling of finding your tribe.

These friendships helped leverage the second wave feminist movement. Steinem and Hughes first teamed up to form the Women's Action Alliance in 1971, which helped launch the first women's shelters, and in 1973 founded the Ms. Foundation, a nonprofit that delivers funding and resources to organizations that support women's rights.

"Gloria was my touchstone in those early days of the women's movement," Marlo Thomas wrote. "She brought me into a circle of amazing women who were doing groundbreaking things. She opened my eyes to the power of creating coalitions that actually effected change rather than just talking about it. "

Stanton and Anthony — suffragette besties — first met in 1851, forming a dynamic duo: Stanton with her writing talents, and Anthony managing the business side of their campaigns. The pair went on to form both the women's newspaper the Revolution and, in 1869, the National Woman Suffrage Association. When Anna Howard Shaw met Anthony in 1887, she was impressed by their movement and joined the NWSA, helping the pair lobby for women's right to vote.

According to historian Penny Colman, Stanton once wrote to Anthony, "No power in heaven, hell or earth can separate us, for our hearts are eternally wedded together." Now that's friendship.

At a time when women weren't getting praise for being all-star athletes, the Rockford Peaches, one of the founding teams in the All-American Girls Professional Baseball League, changed the tide. In their trademark peach uniforms, the team won the league championships in 1945, 1948, 1949 and 1950 thanks to star athletes like Dorothy Kamenshek, Lois Florreich and Gladys Davis. They even spawned a Hollywood film spin-off — yes, that one — A League of Their Own.

#Squadgoal: Lean all the way in

For troublemakers with a cause, look no further than this squad. In 1970, the journalist Lynn Povich led a group of 46 women in a class action suit against Newsweek magazine for discrimination in the workplace. How'd the squad gather? "To keep our plan secret, each of us approached one other woman, usually — where else? – in the ladies' room!" Povich told MariaShriver.com. "We bonded in our belief that we were fighting the good fight, the right fight."

After the group won the lawsuit, women began writing full time for the magazine, with none other than Povich at the helm as senior editor.

Without this squad, we would have never heard of the legendary jazz singer. According to historians, in 1955, Marilyn Monroe begged the owner of the Mocambo nightclub in Hollywood to book Fitzgerald, one of her favorite artists. She made a deal with the nightclub that if they would book Fitzgerald, she would show up every night, thus promising a crowd. Fitzgerald attributed her big break to Monroe and her devotion.

Sure, they never actually lived. But Felicity, Samantha, Molly, Addy and Kirsten were the squad we all wanted on our shelf, and taught us more about American history than our teachers ever managed in third grade.