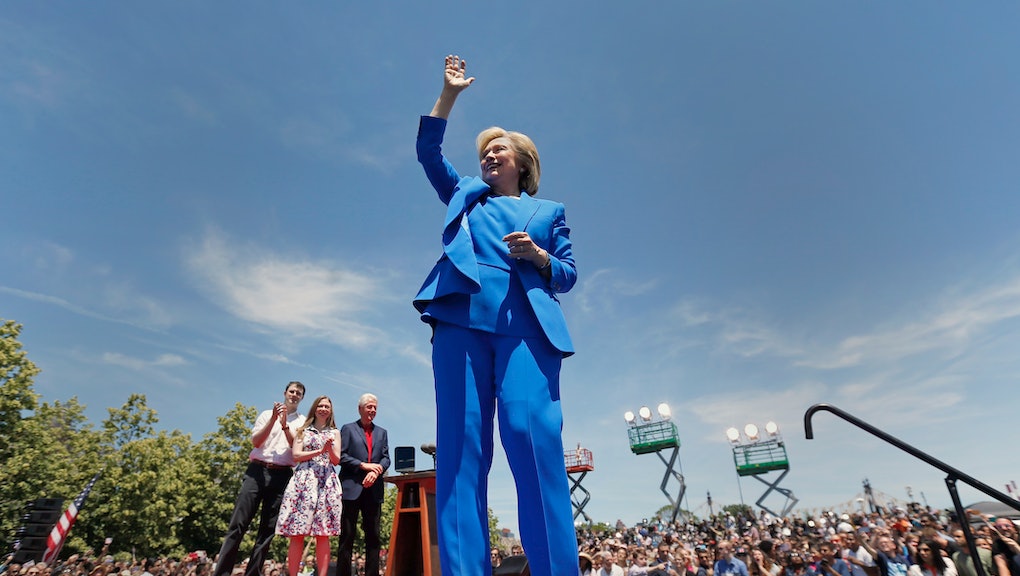 Roosevelt Island, N.Y. — Under bright Saturday skies, in "a place with absolutely no ceilings," Hillary Clinton used the first rally of her second campaign for president to offer Americans a return to the ideals of shared prosperity and social progressivism that guided the administration of President Franklin D. Roosevelt.

Clinton used the occasion to put an elbow into the side of the corporate class, which many Democrats worry she has grown too close to over a quarter of a century moving through the innermost circles of American politics.

"Democracy can't be just for billionaires and corporations," Clinton said. "Prosperity and democracy are part of your basic bargain, too."

"That bargain inspired generations of American families, including my own," the former secretary of state said, channeling the story of her late mother, Dorothy Rodham, who was abandoned by her parents as a child and ran away before finally settling in Chicago at age 14.

"Because some people believed in her, she believed in me," Clinton said. "I wish she could have seen the America we're going to build together."

Clinton formally entered the race in April, posting a short video to her website before beginning a trip to Iowa, where she met with voters for a series of low-key roundtable discussions. Since then, she has mostly attended small gatherings and home fundraisers.

On Saturday, she presented supporters with a buffet of lightly constructed policy principles — a push for equal pay and universal pre-kindergarten, a path to citizenship for undocumented immigrants, expanded voter rights and stronger protections for women's reproductive rights and LGBT civil rights, to name a few — and a wholehearted embrace of the policies championed by the man who beat her in this same contest in 2008, President Barack Obama.

But she steered well clear of naming or even alluding to her Democratic primary rivals, instead targeting Republican presidential candidates who oppose abortion rights and support states' efforts to undermine access.

"They want to shame and blame women, rather than respect our right to make our own reproductive health care decisions," Clinton said, winning a moment of intense applause from a friendly but mostly reserved audience.

Hillary 2.0: Clinton enters this second campaign eager to carve out a new place in the American political sphere, one crafted to better suit a broad shift in Democratic politics toward increasingly popular, socially liberal positions.

It might not be as much of a reach as many political pundits believe. While Clinton's image is solidified among older voters and the Generation X'ers who first met her as the wife of presidential candidate Bill Clinton, the younger cohort has a different frame of reference.

"Her stances on a lot of issues are just really where i want them to be, like equal pay for women and LGBT rights — I feel like that's finally a forefront issue," Jenna Goldin, 25, told Mic as she waited with the early arrivals just feet from the stage. "And for me, as part of the LGBT community, it's so refreshing to have a candidate who finally is ready to stand up and say 'I support you.'"

Her friend, Liz Robins, 24, said that while she paid attention as a teen to the 2008 campaign, this time out "resonates so much more with me, and I think it's going in the right direction. It's positive, it's looking to the future, it's a different Hillary, I think — a Hillary Clinton that was always there, but now she's bringing it out and it's exciting to me."

If that is the prevailing mood, at least among voters inclined to support a Democrat, then the launch will have been a wild success.

Before the Saturday lovefest, the campaign released a video titled "Fighter," tracing her life and career back to humble beginnings in Illinois, work as a young lawyer at the Children's Defense Fund and sometimes unsuccessful clashes with power on Capitol Hill.

"We worked really hard — we weren't successful," Clinton says, discussing the ill-fated health care reform project she led while her husband was in the White House. "You have to get up off the floor, and you keep fighting."

The video also includes a clip from her 1995 speech at the United Nations Fourth World Conference on Women in China.

The campaign also used the day to introduce its "official" Spotify playlist, a millennial pop-heavy compilation featuring familiar hits from Katy Perry and Pharrell Williams. California band Echosmith performed live in the run-up to the speech and Clinton arrived onstage with Sara Bareilles' "Brave" blasting behind her.

Following the event, Clinton will set off for Iowa, home to the first 2016 caucus, where she will headline a Saturday night gathering at a supporter's home in Sioux City. Her comments there will be simulcast to select "organizing parties" around the state. On Sunday, it's off to New Hampshire, before a week of events in early-voting South Carolina and Nevada.

With the unofficially official kick-off now behind her, Clinton seems ready for the long campaign ahead. Not that she hasn't thought about what could be awaiting her in 2017 and beyond.

"You won't see my hair turn white in the White House," she said. "I've been coloring it for years."