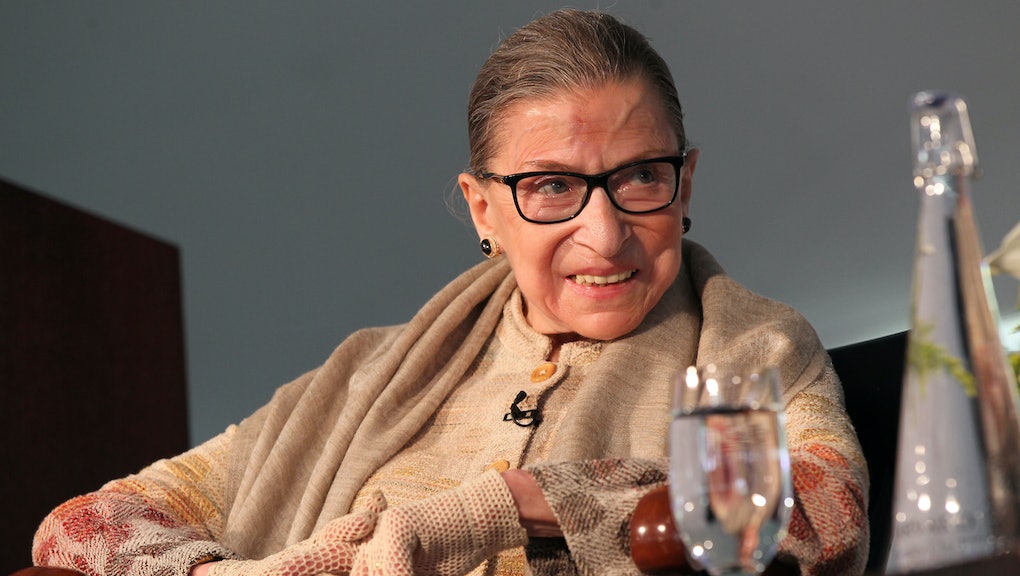 MSNBC reports that at the American Constitution Society's convention in Washington D.C. on Saturday, Ginsburg gave former clerk and California Supreme Court Justice Goodwin Liu a tantalizing tidbit of information about an upcoming film based on Ginsburg's life. Star Natalie Portman, who will be playing Ginsburg in On the Basis of Sex held up the movie's development to demand a female filmmaker head the project.

"Natalie Portman came to talk to me about this, and we had a very good conversation," Ginsburg said. "And one thing, interesting, that she insisted on, it held up the project for awhile. She said, 'I want the director to be a woman. There are not enough women in this industry. There are many talented out there.' And now they do have a woman director."

That woman is Marielle Heller, who Deadline Hollywood reported last month is enjoying a "breakout year" following the critical success of her film Diary of a Teenage Girl. On the Basis of Sex is on a production fast-track and will explore Ginsburg's feminist legal work in the 1970s, particularly Reed v. Reed, a successful Supreme Court case that ruled estate administrators "may not lawfully be mandated solely on the basis of sex."

Perhaps Ginsburg gave Portman a few tips on how to get what she wanted, too.

Meanwhile, sexism remains a very real problem in Hollywood. Recently, Melissa McCarthy called the movie industry's culture of misogyny an "intense sickness" and said she was trying to subvert the stereotype that "you're an unattractive bitch because your character was not skipping along in high heels." A 2013 survey conducted by University of Southern California researchers found that just 29.8% of filmmakers (including specialists like cinematographers and screenwriters) were female, with 40% of those women reporting that "Male-dominated industry networking" was a serious impediment to their careers.

Watch the whole interview below: