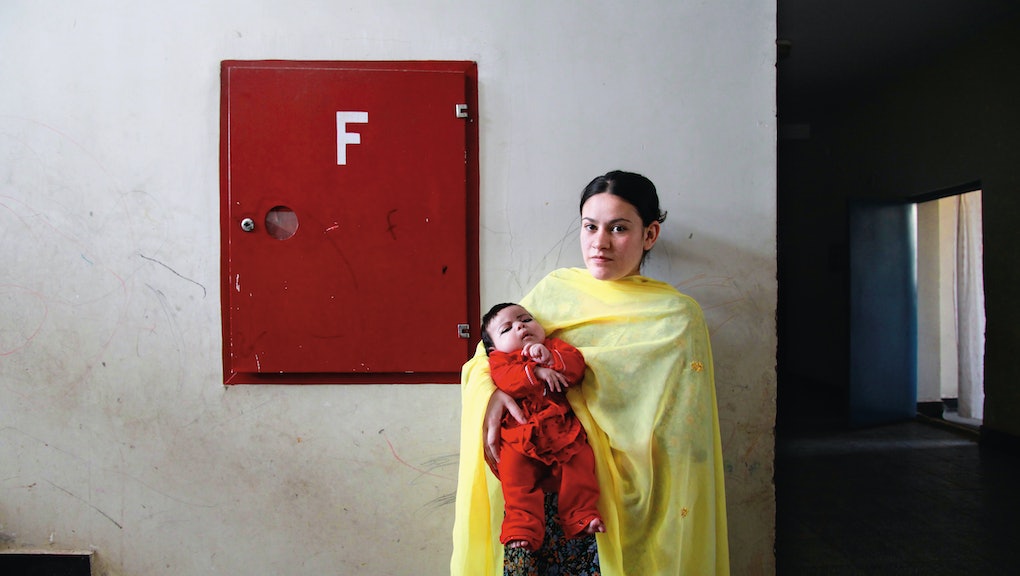 When she was assigned to photograph a women's prison on the outskirts of Kabul, Afghanistan in 2010, photographer Gabriela Maj hardly expected the project to consume the next five years of her life. Yet the inmates of Badam Bagh women's prison — women jailed for so-called "moral crimes" like running away from their father or husband's home — deeply impacted her.

Afghani women often run away from home to escape forced and/or underage marriage, domestic violence (including beatings, stabbings, burnings and rapes) and even forced prostitution, according to Human Rights Watch.

"In most cases, women accused of and incarcerated for moral crimes are survivors of abuse," Maj told Mic. "The Afghan justice system transforms victims into criminals while allowing the perpetrators to go free."

"I didn't know of anyone else at the time who was recording these women's stories and bringing them out of the prisons," Maj said. The photographer thus took on the task herself, listening to the stories of these "moral criminals," taking their portraits and compiling them in a book named after the first prison she visited: Almond Garden, the English translation of Badam Bagh.

May explained that these women's prison experiences are "very different" from what most Westerners imagine to be standard incarceration. Five to 10 women sleep in dorm-style cells, are allowed personal items such as decorative curtains and family photos, care for their children and are able to visit each other's cells and spend time together in common spaces. But the facilities — often built after 2001 with foreign aid, Maj added — mask the emotional and psychological torture these women face.

"Many of the women who are living in prison suffer from depression, PTSD, anxiety and other forms of psychological distress as a result of the experiences they have had prior to entering into the prison facility," Maj said. "Unfortunately, in Afghanistan there is no mental health support within these facilities and so women struggling in these ways are alone and oftentimes exposed to the violent behavior of other inmates."

"Four years after the adoption of a law on violence against women and 12 years after Taliban rule, women are still imprisoned for being victims of forced marriage, domestic violence and rape," Human Rights Watch Asia director Brad Adams stated in 2013. "The Afghan government needs to get tough on abusers of women, and stop blaming women who are crime victims."

The women Maj met also feared what life held for them after prison. When asked about life after jail, Maj told Feature Shoot that her subjects responded, "I will be killed." Disowned by their families and disgraced by their "moral crimes," some women manage to find work in big cities or safety in shelters, but others are the victims of honor killings.

After all, she noted, "The problem with moral crimes is not about the women who are being accused of them but about a system in which control and ownership of women's bodies belongs to men."