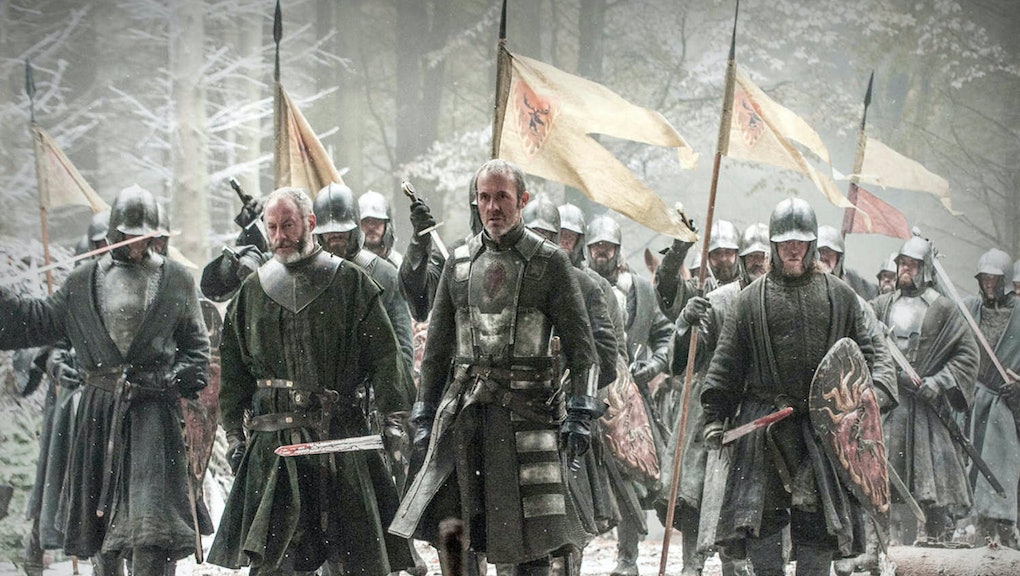 While Arya Stark is busy being punished with blindness by the Faceless Men for murdering the wrong villain and the Khaleesi is getting lost somewhere in Essos, the situation in Westeros rapidly worsens for the survivors of the previous seasons' bloody purges of royal bloodlines.

Stannis Baratheon and Jon Snow are both dead — the first at the hands of Brienne of Tarth after his defeat outside Winterfell and the latter assassinated by his own brethren for allowing the Wildlings safe passage through the Wall. Meanwhile, the Boltons' victory over all other pretenders to the throne in the North — be they Stark, Greyjoy or Baratheon — seems absolute.

But for those feeling hopeless after the finale, all might not be as it seems. These three popular theories suggest that much yet is left to unfold.

As Olly, Ser Alliser Thorne and the other mutineers on the Night's Watch take their turns stabbing Jon Snow, Melisandre is busy arriving back at Castle Black, having fled Stannis' army before the disastrous battle outside Winterfell doomed her as well.

Melisandre either saw Stannis' crushing loss against the Boltons' far superior forces in the flames, or she realized that the disturbing sacrifice of Shireen Baratheon failed to garner the Red God's favor when entire contingents of Stannis' army began deserting en masse. Either way, the Red Woman realizes that Stannis Baratheon is not the second coming of the Lord of Light — and possibly that her prophetic visions fit another character quite nicely.

Melisandre had been convinced that Stannis Baratheon was the mythical Prince That Was Promised, a legendary hero who will save the world from darkness:

But given Jon's traitor status among both the Wildlings and the men of the Night's Watch, this description actually seems to fit him better than Stannis. Jon was also recently given some prophetic advice from Maester Aemon, the last living Targaryen in Westeros: "Kill the boy, Jon Snow. Winter is almost upon us. Kill the boy, and let the man be born." Finally, Jon has Longclaw, the dragonsteel sword capable of destroying a White Walker, which could be the actual magic sword ("Lightbringer") named in Melisandre's prophecy.

Melisandre's magic is presumably pretty strong at this exact moment, given that Shireen's royal blood had immense power. And it just so happens that the Red Priests of R'hllor are capable of resurrecting people who have recently died. Remember Beric Dondarrion and Thoros of Myr?

So Melisandre could give Jon the kiss of life, thus allowing him to be reborn as the Prince Who Was Promised and fulfill his destiny to save the North from the threat of winter. This would mesh well with fan theories that Jon is secretly a Targaryen. It would also release Jon from his vows with the Watch, which explicitly state, "Night gathers, and now my watch begins. It shall not end until my death."

2. Roose Bolton is dead — or his days are extremely numbered.

Fans on Reddit were quick to note that Roose Bolton's absence from the battle outside Winterfell was a little strange. Why would Ramsay Bolton carry out the final assault on Stannis' forces alone?

It's possible that Ramsay, threatened by the knowledge that Roose had impregnated his new wife Fat Walda with a possible competitor to Ramsay's inheritance of the Dreadfort, took the opportunity to silence his father and mother-in-law forever. Though they haven't mentioned it yet in the show, the book version of Ramsay is rumored to have murdered Roose's previous trueborn son, Domeric, with poison.

This theory may be a stretch — Roose Bolton is a tough old bastard, after all — but what is clear is that Ramsay fears his inheritance, and thus his status as future Warden of the North is at stake, setting him up for a likely conflict with his father. We also know Ramsay is an impulsive sociopath who probably wouldn't bat an eye at kinslaying, and it would be an ironic way for the man who organized the Red Wedding to go.

Count this one as unlikely to have happened while the audience wasn't looking. But with a major battlefield victory hot under his belt, now seems like the best possible time for Ramsay to launch the coup that's been brewing all season.

No one in Game of Thrones dies off-camera, except for Arya's "dancing master" Syrio Forel (whom some fans refuse to recognize as dead anyhow). So it seems more than a little suspect that the last time we see Stannis, while he's badly wounded in the aftermath of the slaughter of his army, he just so happens to run into Brienne of Tarth. Brienne doesn't seem the type to execute a helpless enemy, and the camera cuts away before the audience can see whether she has accomplished the bloody deed.

Stannis may end up dead anyway — whether he dies of his wounds, starves or freezes while limping away in the cold, or is captured by one of his many enemies and put to the sword. But it's possible Brienne chooses not to slit his throat, especially because his order to "Do your duty" might have reminded her that Sansa Stark is still waiting for her rescue from Winterfell — and we've been spending a lot of time waiting for that plotline to pay off.