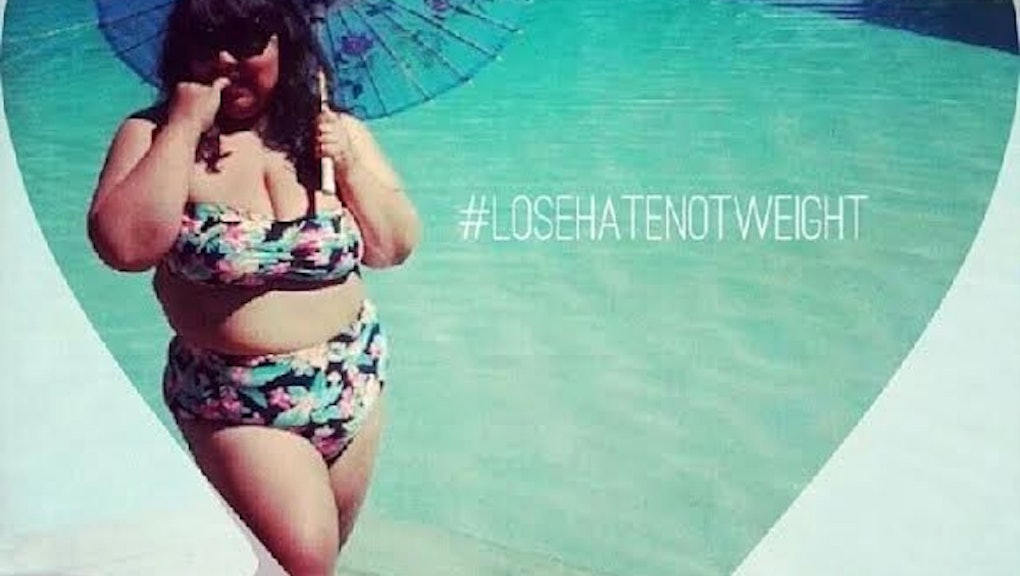 5 Body-Shaming Comments That Everyone Should Quit Saying This Summer

Summer should be a time of celebration: School's out, the weather is finally tolerable, there are things to do outside — the list goes on. Yet plenty of people dread the season, fearing the body shaming that seems to rise along with the temperature.

Body shaming is prevalent in our culture year-round, but summer is the perfect opportunity to end it once and for all. Here are just five body comments we need to eliminate from our collective vocabularies this summer.

1. "Should you really be wearing a bikini?"

Our culture perpetuates the idea that wearing a bikini is an honor won only through exercise, dieting supplements or other methods of obtaining a "bikini body." This notion often leads people to police others who have seemingly failed to earn this privilege.

Like so many others, body positive activist Virgie Tovar — who started the hashtag #LoseHateNotWeight — once bought into this myth. But she eventually realized that any body can be a bikini body, and that nobody had the right to question another's choice of swimsuit.

"It's time to end the belief that that the enjoyment of sun and waves is for only one type of body, and recognize that everyone has a right to the pool, the beach, shorts and swimsuits in the body they have right now," she told Mic.

Before Tovar embraced her right to wear whatever bathing suit she wanted, she would wear T-shirts over her suits and "dream of a day when [her] body would be good enough to be worth looking at." Covering up wasn't just a self-defense mechanism to protect herself from criticism; it was also the result of cultural messages that encouraged her to believe her body was in some way insulting to others.

"It's a double whammy of shame," Tovar explained. "We are told to 'cover up' not only as a way to protect ourselves from criticism, but also as a way to take care of others who might see our non-conforming body and become uncomfortable."

No individual should make choices about what they wear based on what others think, Tovar said. She has since proudly embraced wearing any bathing suit she wants — not because she has lost weight, but because she "shed the hate" she had for her body.

3. "I got in shape for beach season with [insert cleanse/diet/juice fast here]. You should try it!"

The next time anyone encourages you to buy into these fads, remember that not only are most diets or pills unsafe and ineffective, but they're also about a much bigger system of capitalism that instills shame in countless individuals in the name of profits.

Between picnics, cookouts and dining al fresco, the opportunities to eat in public during the summer abound. With these opportunities comes the possibility of intrusive questions about others' eating habits. Far too many take it upon themselves to tell others to modify what they eat, often in the name of encouraging "health."

The reality is that many factors enter into one's weight that have nothing to do with diet, such as genetics, stress levels, environmental factors and even one's financial standing. Not only is commenting on somebody's food choice insulting, therefore, but it also ultimately ignores complex realities about the human body.

5. "Who told her she could pull off those shorts?"

Some may think making snarky, body shaming comments about others are fine as long as their target is none the wiser. But in addition to generating hate, these comments perpetuate a cycle of shame that hurts the person who made them in the first place, too.

"Back when I was ashamed of my body, it would make me kind of mad to see people my size or larger who did not participate in that shame," body positive activist and burlesque performer Lillian Bustle previously explained to Mic. "Who did they think they were?"

Feeling this way and making comments to this end only reinforced her own body shame. "Judging someone else's appearance will always make you judge your own appearance more harshly," she added.

Ultimately, a change of season should not be a justification for shame, nor should the ability to enjoy the warm weather be a prize for certain behavior. As Bustle noted, it's important for everybody to remember that nobody should "have to earn the beach."