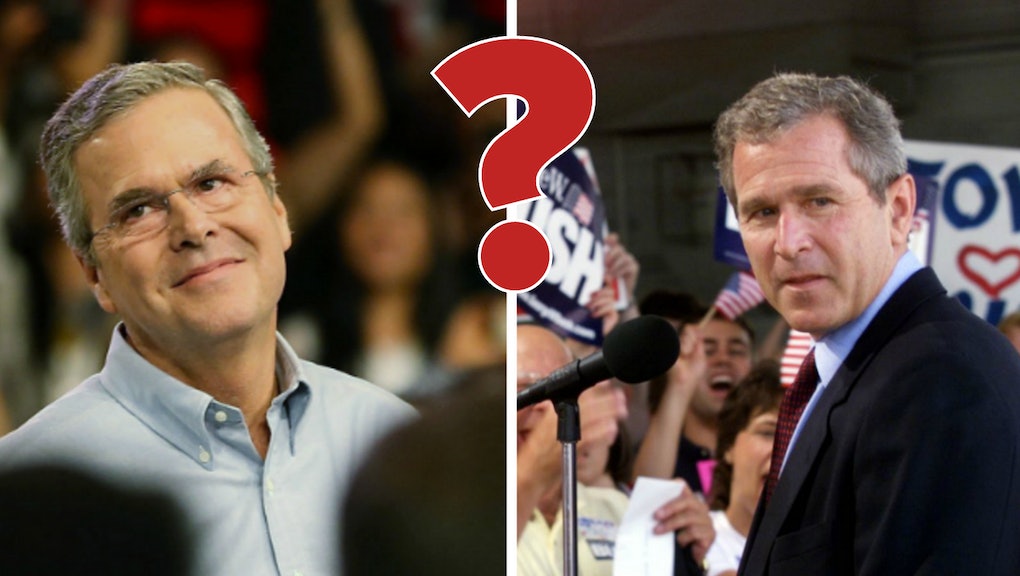 After months of raising money and campaigning in early primary states, former Florida Gov. Jeb Bush formally launched his 2016 presidential bid with a speech at Miami Dade College on Monday. His entry into the race brings the number of Republicans officially running for president to 11, with four or five more expected to enter the fray in the coming month.

While Bush had mostly kind words for his primary opponents, he delivered a harsh verdict on the current administration and the Democratic frontrunner, Hillary Clinton.

"Our president and his foreign-policy team have been so eager to be the history makers that they have failed to be the peacemakers," Bush said. "With their phone-it-in foreign policy, the Obama-Clinton-Kerry team is leaving a legacy of crises uncontained, violence unopposed, enemies unnamed, friends undefended and alliances unraveling."

The son and brother of the last two Republican presidents, Bush has worked hard to distance himself from President George W.'s Bush's disastrous administration, while also defending their personal bond and embracing his father, George H.W. Bush.

That tension has led to a few minor miscues and one miserable gaffe. In May, it took Bush a week and four separate occasions to explain that he would not, knowing what he knows today, have invaded Iraq in 2003. Older brother George W. was notably absent from the festivities on Monday.

Still, there was a familiar thread running through the former governor's remarks. The strain of conservatism articulated by Bush on Monday bears a close resemblance to what his brother described when announcing in June 1999 that he would seek the Republican nomination. Below are nine quotes, either from Jeb's speech on Monday or George's in 1999. See if you can guess which is which, then check out the similar line from the other announcement:

1. "We stopped processing kids along as if we didn't care – because we do care, and you don't show that by counting out anyone's child. You give them all a chance."

Here's George singing a similar tune in 1999: "We should make a solemn commitment in this country: that every child will be educated. That no child will be left behind."

2. "I'm running because my party must match a conservative mind with a compassionate heart. And I'm running to win."

And Jeb, on Monday in Miami: "I will take nothing and no one for granted. I will run with heart. I will run to win."

3. "That is always our first and best instinct in this nation filled with charitable hearts. Yet these have been rough years for religious charities and their right of conscience."

George W. Bush in 1999: "It is conservative to reform welfare by insisting on work. It is compassionate to take the side of charities and churches that confront the suffering which remains."

4. "I will rebuild our military power — because a dangerous world still requires a sharpened sword. I will move quickly to defend our people and our allies against missiles and blackmail."

Jeb Bush: "This supposedly risk-averse administration is also running us straight in the direction of the greatest risk of all — military inferiority."

5. "We'll be prosperous if we reduce the regulations that strangle enterprise."

Jeb Bush: "We will get back on the side of free enterprise and free people."

7. "That chance, that hope requires the best that is in us, and I will give it my all."

George W. Bush: "The next president must close this gap of hope. It is the great challenge to America's good heart."

8. "Many are saying: The dream is not for me. Kids who turn schoolyards into battlefields. Children who corrupt their wills and souls with drugs, who limit their ambitions by having children themselves."

Jeb Bush: "Think of what we all watched not long ago in Baltimore where so many young adults are walking around with no vision of a life beyond the life they know. It's a tragedy played out over and over and over again."

9. "For my part, I'm running, and I'm running hard. I know that this race will be competitive. I know the other candidates are good and talented people."

Jeb: "Campaigns aren't easy, and they're not supposed to be. And I know that there are good people running for president. Quite a few, in fact."

Sixteen years, three days, two wars and one economic meltdown after George W. Bush announced his first bid, Jeb Bush stressed some very similar themes in his speech Monday. Though it hardly guarantees the new Bush will be the same as the old Bush, it is a very interesting piece of evidence for political opponents, critics and, most importantly, voters to consider.