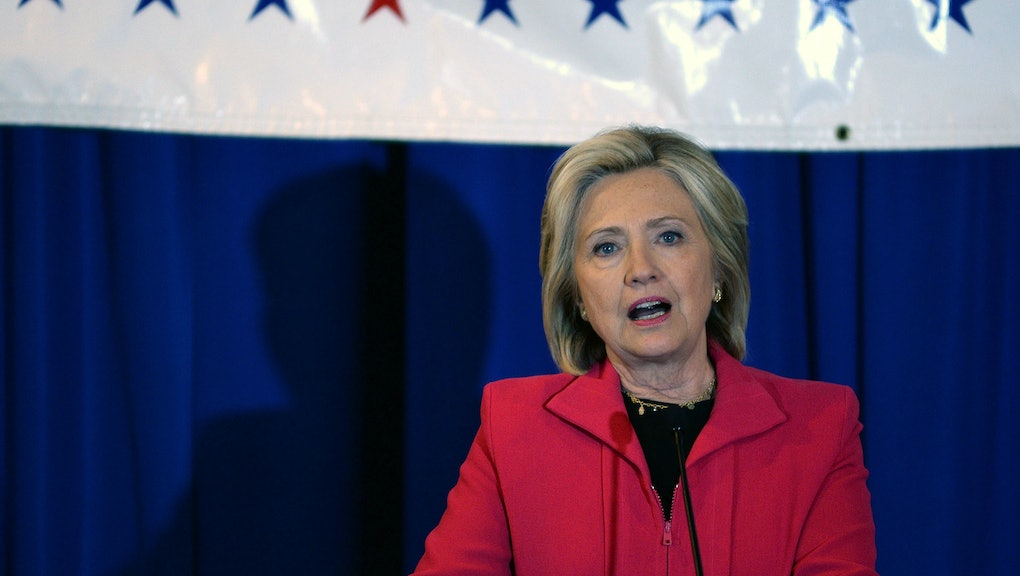 The Real Reason Hillary Clinton Is Swinging to the Left

This time around, she's different.

That's the prevailing narrative surrounding Hillary Clinton's campaign for president in 2016. While still in its early stages, her campaign has already rolled out firmly liberal positions on a host of urgent public policy questions. On immigration, she's argued for more expansive reform than President Barack Obama. On criminal justice, she's said "it's time to end the era of mass incarceration." She's claimed gay marriage should be a constitutional right. She has promised universal pre-K. She's expressed support for a higher minimum wage and debt-free college. And her campaign has said she will spend the next few weeks traveling to early states and laying out more detailed policy proposals on issues important to Democratic primary voters.

While some voters might be inclined to conclude Clinton is finally showing her true colors, the fact is Clinton's emphasis on liberal positions is being driven by larger forces: She sees the political center in America drifting leftward, and she has wagered she too must move to the left to win both the Democratic nomination and the presidency.

Clinton's re-emergence: Clinton's campaign this time around is significantly more progressive than her 2008 campaign, which hewed closer to the center on many critical issues. It was also a campaign that downplayed her gender for fear that it may undermine her credibility in heartland America.

What is the cause of Clinton's emergence as an unapologetic liberal? Part of it is based on an attempt to replicate Obama's winning strategy in 2008 and 2012. In those campaigns, for all the lofty rhetoric about transcending partisanship, Obama's ground game focused on motivating as many Democrats as possible to vote in the states needed to win the election, rather than trying to persuade moderates and conservatives to his side.

Still, Clinton cannot afford to completely write off anyone who isn't a Democrat — that would be a risky strategy. While narrowly focusing on a few states may be the best way to win the Electoral College, doing so does not produce the mandate needed to govern effectively.

Clinton also needs to worry about how she represents her party. If Clinton alienates moderate voters while swinging to the left, she will make it harder for Democrats running for the House and Senate in moderate districts and states. All of these issues have played a role in why she's shied away from being a class warrior or speaking too harshly of Wall Street.

Which all goes to say that her more unabashedly liberal policy positions are carefully crafted based on the way the winds are blowing. And by many measures, the political climate has been growing more hospitable to more liberal candidates.

What this means is that when Clinton comes out strongly on issues like LGBT rights and equal pay for women, she's not only exciting progressives — she's also riding the wave of national momentum.

Young voters skew progressive: As more young people become eligible to vote (more than 8 million will be eligible for the first time this year, according to Politico) and the ones who can vote grow more politically conscious, they become an increasingly valuable demographic for anyone running for office. The preponderance of data on millennial voters indicates they skew to the left.

Millennials are the most racially diverse generation in American history, and on issues from marriage equality to immigration reform to climate change, they tend to favor progressive solutions in greater numbers than their older counterparts.

In the aftermath of the crisis, Americans are thinking about inequality: The economic crisis that took hold in the final stages of the 2008 campaign caused panic among policymakers and the public. There was a great deal of anger at the irresponsibility of the financial sector for setting off the crisis, but Obama's handling of the crisis was geared toward stabilizing the economy. Many progressives were disappointed by his disinterest in holding big banks accountable for their actions, but ultimately the public did see results: The bailout worked, growth returned and unemployment declined.

Now that the economy has recovered, the structural problems with the economy have become clearer. Seven years after the crisis, there is more of an urgency that something has to be done to help people at the middle and bottom who need more than just a better health care system. Occupy Wall Street has something to do with it, but less sexy things like multiple quarters of stagnant wage growth and below target inflation are also real things that have incrementally caused people to re-examine their assumptions. These issues have made it easier for Clinton to be bolder when she talks about fighting for an economy that does more for the poor and the middle class and for broadly shared prosperity.