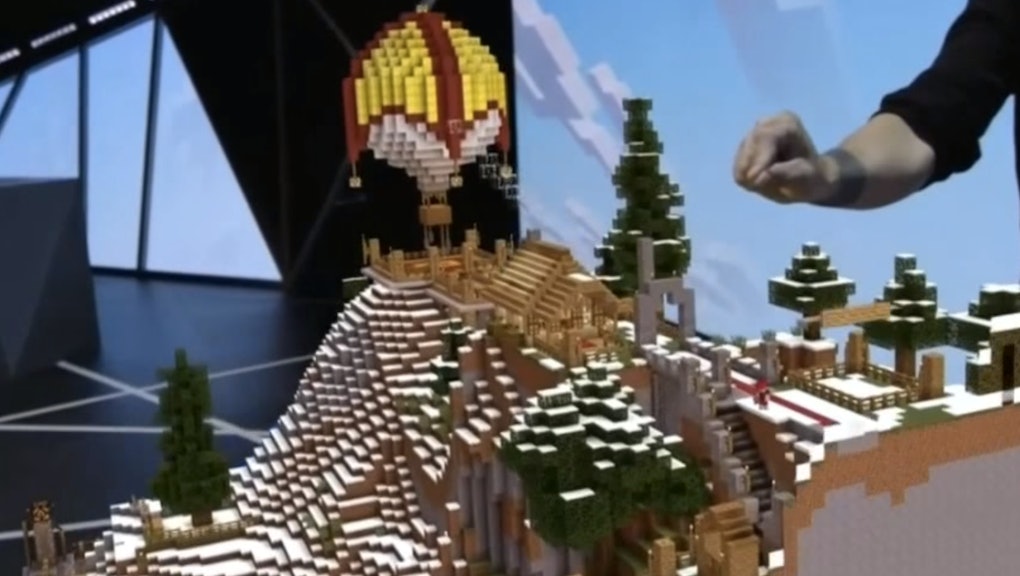 The Future of 'Minecraft' Was Unveiled at E3, and You Won't Believe Your Eyes

Minecraft is a worldwide phenomenon. The world-building game is played by tens of millions of people worldwide and has a pocket edition that's dominated the App Store for over two years. Most gamers would say that it's like playing with Legos, only with digital blocks instead of physical ones.

At Monday's Electronic Entertainment Expo, Microsoft held a keynote to debut a new version of Minecraft for its augmented-reality headset, the HoloLens. To kick off the presentation, the demonstrator said two words: "Create world." This is what happened:

Through his HoloLens, the world of Minecraft was rendered in 3-D on the table in front of him.

The goggles allowed him to manipulate the world using simple gestures. With his hands, he zoomed in on another player who was standing nearby, controlling her character with the tablet version of the game.

It gets cooler: HoloLens is sensing the presenter's voice and his gaze, so he simply needed to focus his eyes on a part of the game board and say the words "lightning strike" to detonate a digital TNT pile.

Minecraft is taking over the gaming world. At any given time, there are about a million people playing Minecraft — at least, on purchased copies of the game that aren't being played illegally on private servers. The last available sales numbers say that it's been bought 54 million times, and that was a full year ago:

Minecraft is more popular than anything on YouTube except for the word "music." Searches for the game beat out "movies," Frozen, Drake, Eminem and Beyoncé. The game's enormous online video community shares tips, tricks, stunts and major projects like Titan City, a Minecraft location that was under construction for two full years:

Lego is not going to be happy about this. The classic children's blocks are in the middle of a major mainstream resurgence. Desperate to capture a new generation of post-millennial kids, Lego has in the last few years built up its public profile and capitalized on nostalgia with a new marketing drive, a popular blockbuster movie and an upcoming documentary.

The appeal of Legos is twofold. First: Players' creations are limited only by their imagination; they use a sandbox of pieces and parts to build whatever world they can imagine. Second: Legos get kids off their digital devices and playing with their hands.

Until now, Minecraft could lay claim only to the first part, creativity. But now, as games enter the world of augmented reality — where we use technology to put digital objects in 3-D space — Minecraft has kids moving, turning and manipulating objects with their hands. Lego's sole advantage is kaput.