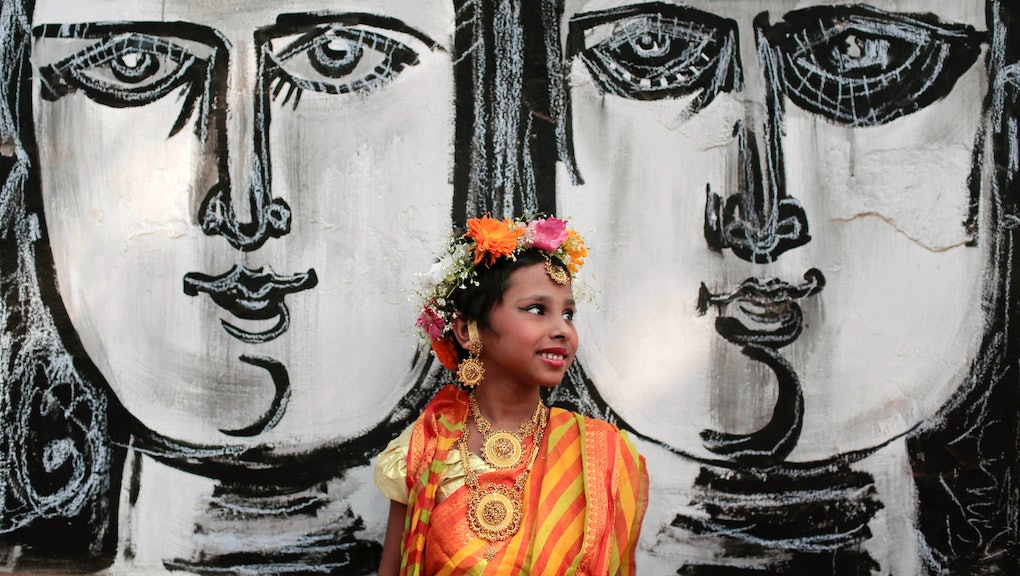 Bangladesh is one of the worst countries in the world for child marriage. Roughly 66% of Bangladeshi girls are married off before they're 18 years old.

However, while in other countries issues like tribal customs and poverty often fuel child marriage, a Human Rights Watch report finds Bangladesh's reasons are perhaps even more horrifying: There's an uncontrollable epidemic of rape and sexual abuse.

According to the report, published earlier this month, in Bangladesh there is "strong social pressures to get girls married, in part to prevent them from having a romantic or sexual relationship before marriage."

Given the prevalence of rape in Bangladesh, parents rush to marry their daughters early to minimize the likelihood they will get abused or raped by a someone other than a husband. It is extremely difficult, if not impossible, for fathers to marry off daughters who have been victims of sexual abuse since they're considered "marred" or "dirty."

"There is so much sexual harassment. Parents who are better off who get their daughters married [young] usually do so because of sexual harassment," an NGO worker told the report's researchers.

With such high rates of sexual assault and child marriage, the problems compound one another, and each gets worse. In rural parts of the country, for example, roughly a third of women's first sexual experience was forced upon them, according to the World Health Organization. Not only are girls more likely to be sexually harassed, but they are penalized further by being married off at an increasingly younger age because of it.

"Eve teasing": In Bangladesh, sexual harassment, known locally as "eve teasing," is a huge problem. More than 10 women or girls are victims of acid attacks every week and statistics on rape are difficult to pin down, but equally egregious. In fact, the problem is so profound, it's been known to drive women to suicide.

"Some victims find suicide is the only avenue that enables them to escape this social pandemic," Sultana Kamal, lawyer and executive director of human rights organization Ain-O-Salish Kendra, told BBC in 2010.

"'Eve teasing' [has] become an often brutal form of sexual harassment that can result in permanent physical and psychological damage and profoundly alter the course of a girl's life," according to UNICEF. "The harassment manifests itself in different ways, ranging from verbal abuse and sexual innuendo to abduction, acid-throwing and rape."

Rather than tackling the problem of sexual harassment, common social responses ultimately interfere with girls' basic human rights. "Some parents choose to keep their daughters at home rather than send them to school, or they marry girls off at an early age in an attempt to protect their honor and safety," UNICEF reports.

"In [the fathers'] minds, it's better the husband do it than someone else," Jayati Ghosh, social activist and an economics professor at Jawaharlal Nehru University, told Mic in April.

A systemic problem: The prevalence of child marriage in Bangladesh is twice as high as it is for developing countries on average. Approximately one-third of girls in the developing world are married by the time they're 18, in Bangladesh, that number is two-thirds.

The country's female prime minister, Sheikh Hasina, has vowed to tackle the issue of child marriage in the past, promising to end the marriage of children under 15 by 2021 and teenagers under 18 by 2041. However, a draft of the Child Marriage Restraint Act 2014 in September, which Hasina approved, suggested lowering the legal age for marriage from 18 to 16 for girls.

Child marriage is deeply damaging to a society, violating human rights on an individual level and hindering development on a collectivist level. It has "many harmful consequences, including health dangers associated with early pregnancy, lower educational achievement for girls who marry earlier, a higher incidence of spousal violence, and an increased likelihood of poverty," according to the Human Rights Watch report.

While the the problem is particularly egregious in Bangladesh, it is important remember this problem plagues millions of girls across the world. Policymakers and national leaders, like Hasina, would be wise to prioritize the eradication of this inhumane practice amongst other development goals.