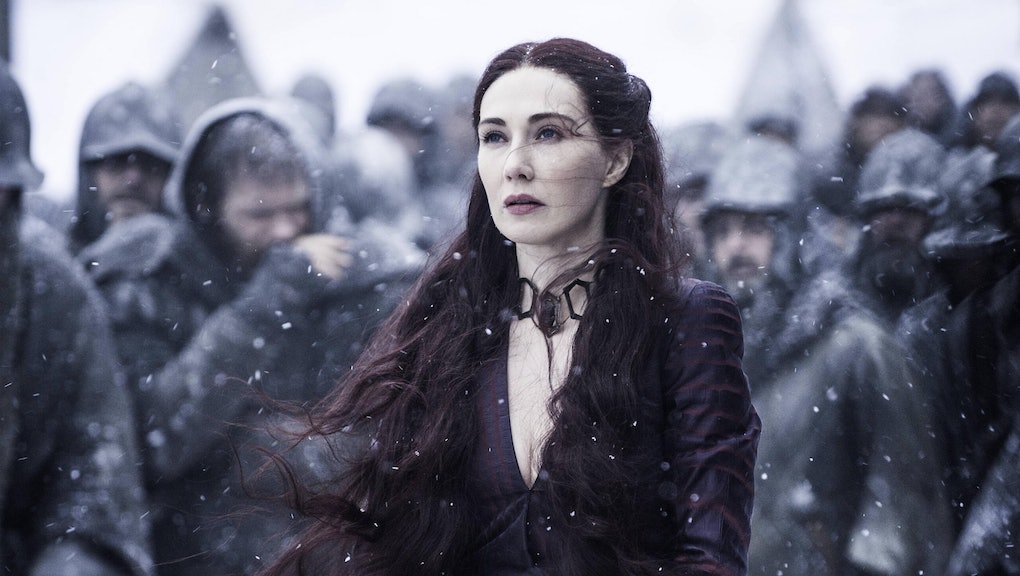 Five seasons in, HBO's Game of Thrones has finally caught up with George R.R. Martin's A Song of Ice and Fire books. For a few of the characters and storylines, in fact, it's surpassed them, raising the question of how the series did with adapting its source material.

This season was marked by both soaring highs and controversial lows. Fans rejoiced at finally seeing beloved characters Tyrion Lannister and Daenerys Targaryen on screen together, but bristled at the show's treatment of its female characters: Sansa's rape and the burning of Shireen were both used to explore how these crimes affected male characters.

Most notably, none of these events are to be found in either A Feast for Crows or A Dance with Dragons, the books adapted for season five. Once, the show and book series were once seen as two sides of the same coin. But now that the show continues to pile up significant changes, it's clear the two series will end up in different places by the end.

Once, the show and book series were once seen as two sides of the same coin. Now, it's clear that the two series will definitely end up in very different places by the end.

Along the way, some of the books were converted well. Others ... weren't. The worst adaptations have made one thing clear: For the complete experience of Westeros, it's best to take in both book and series.

Using these criteria, here's our ranking of how well each A Song of Ice and Fire book has been adapted by Game of Thrones, from best to worst:

1. A Storm of Swords (seasons three and four)

The third book in is usually regarded as the series' high point. It's chock-full of wild plot twists; the infamous Red Wedding happens at only the halfway point. By dedicating two seasons to this book, Game of Thrones showrunners David Benioff and D.B. Weiss gave themselves time to develop each storyline and set up each gut-wrenching moment.

The beloved series is only possible because of the first book, which brilliantly sets up Westeros as a fleshed-out world with interesting characters, many of whom have complete arcs (especially Daenerys). Thankfully, the show's first season was a note-for-note adaptation.

It does, however, lack at least one crucial world-building detail: Ned Stark's flashback to the last battle of the war against the Targaryens. It's an important scene, one many book-readers take as a strong hint of Jon Snow's secret parentage.

3. A Feast for Crows (season five)

The fourth book covers the same period of time as its sequel, except that it only focuses on half the series' cast. That means no Jon Snow, no Tyrion, no Daenerys. Instead, the book focuses on less-developed characters like Cersei and Brienne, as well as wholly new characters.

As a result, A Feast for Crows is regarded as the worst book. The show's adaptation cut down to brass tacks, cutting and trimming some of the events and characters seen as unnecessary. But the show's changes to the Dorne storyline simply didn't work, and the lack of Greyjoys lost some of the world-building that makes Martin's books so engrossing.

The Battle of the Blackwater was the show's first real test at whether it could adapt the epic fantasy set pieces of the series as well as the shadowy political machinations. By dedicating an entire episode to the battle instead of the typical ping-ponging between set pieces, the show pulled off its "Blackwater" episode brilliantly. Game of Thrones also changed up the nature of Robb Stark's affair, making it about true love instead of a stupid mistake, which added extra sting to the gut-wrenching Red Wedding a season later.

However, the show cut down the complicated nature of Theon Greyjoy's first meetings with Ramsay Bolton. It was a risky move, and the show continues to feel the lingering effects of that decision.

5. A Dance With Dragons (season five)

Every book in A Song of Ice and Fire is long. But where A Storm of Swords' length comes from the sheer number of packed-in plot twists, A Dance With Dragons is long because it's making points about politics. Specifically, it points out that ruling effectively and properly is incredibly difficult.

Daenerys sees herself as a messiah, but just because she can conquer Meereen with an army doesn't mean she can suddenly change the violent customs of an ancient city. She spends most of the book struggling with her rule in what appears to be an impossible situation. By working over this storyline into a conspiracy thriller (where are the faceless Sons of the Harpy going to strike next?) and adding Tyrion, the show made it more viscerally exciting. In the process, however, it lost a lot of the rich political commentary.

Another thing lost in translation is the fifth book's slow build toward total hopelessness. With the epic battle of Hardhome, the show reminded viewers of the menace posed by the approaching White Walkers. The book does this in various ways, as each character's plans and aspirations slowly fall apart over the course of 900 pages. Horrible things have happened to our favorites in the show, but there are also signs of hope.

Not so in the books. There, winter really is coming.