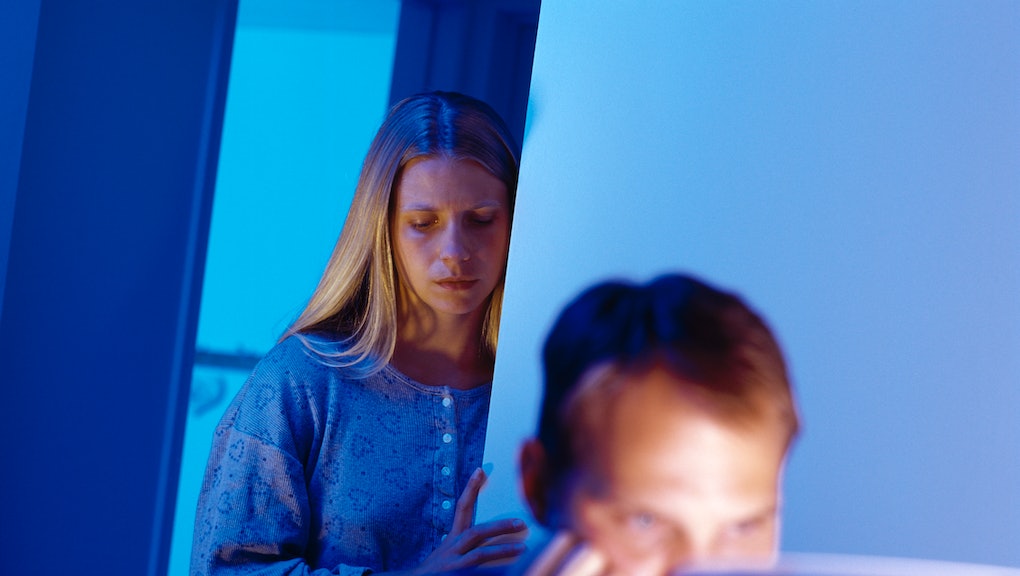 Our laptops and desktops are vessels for our digital ids. They contain our deepest desires and strangest impulses: the unsavory Google searches, the suggestive selfies, the hours wasted on stalking exes, the content so creepy it would make a dead man roll over in his grave. What we do on our computers, enveloped in the blessed sheath of privacy, is our own business.

It's all the more horrifying, then, when this cocoon is punctured by an outside intruder — a family member, coworker, friend or significant other who unwittingly interrupts our sacred, digital "me time."

"I'm pretty sure my boss just saw me writing 'I want to have coffin sex so badly' into Gchat just now."

When we're caught doing something we intended to keep private, it can feel like a bad dream in which we're trapped, cowering and naked, in front of an audience of thousands.

We asked coworkers, friends, Twitter, Reddit and Tumblr about their embarrassing moments, then compiled the most cringeworthy anecdotes. Because really, in the end, all we can do is laugh — if only to stem the flood of embarrassment.

"The continuation of this story is I was stupid and wrote down a link to something like "nickandleogaysex.com" [for Nick Carter and Leonardo DiCaprio]. I wrote on a Post-It note so I could go back to it later, but I left on the desk because it was a family computer. My folks found it and my brother and I were interrogated, but I never fessed up."

"I'm pretty sure my boss just saw me writing 'I want to have coffin sex so badly' into Gchat just now. I just found out about coffin sex and it is now my No. 1 sexual fantasy. But honestly, it doesn't embarrass me that much because how awesome would coffin sex be?"

"Watching Keeping Up With the Kardashians."

At least it's not as embarrassing as Kim's mid-2000s Myspace.

"I was perusing the [male for male] chat rooms on AOL as a young twink and accidentally sent my nudes to the wrong email address one too many times. They would get reported and my account got locked. To have it reinstated, the account holder — my mom — would have to call, so I never told her. To this day I still can't log onto my old AOL account. You're not a thot until AOL locks you out of your account."

"Last year, I was deeply zoomed into a photo of a nude woman's pubic hair at work. I was editing the photo, having just interviewed a woman about starting a pubic hair blog. My boss came up behind me to ask a different question about a meeting. He was higher up, so he didn't know exactly what I was doing. It was my first month there, and I made a splash."

"I was scrolling through my Photo Booth pictures with a friend, and one of them was a very up close and personal picture of my nether regions." What happened next? "I don't know. I think I blacked out. What does one do when a picture of one's dick comes flashing on the screen and you don't have any excuse for it?"

"I was a sophomore, and it was the beginning of second semester. I was rooming with a kid who was pledging for a fraternity, which meant I basically had a single for the entire semester.

"My boxers were still up, and my pants were at my knees, searching for the right video. At that point, this girl and her roommate come barging through my door to show me all the snacks they bought. She busts open the door, sees me, watching porn. To this day, she says I had my dick out, and to this day I swear I was in preparation mode. She slams the door, runs back into her room. I wait two to three minutes, then go across the hall and knock on the door. Lo and behold, I would find out later, as soon as she left my room, she started calling all of our friends from high school."

"I was at home after a particularly brutal finals week, and one day, I found my parents using my computer. They had gone through my search history, and were convinced I had been searching for all of these things in earnest. My dad was as white as a sheet. They asked me if I needed to see a doctor. One of the search terms was 'vaginismus,' to which I told them, 'Do you really think this is something I'm concerned about?' My mom fell off the couch laughing."

"Definitely the time that I got caught Googling how gay sex worked during middle school chemistry class. The teacher gave me mad evil eye for the rest of the week. I was a late bloomer."

"Needed a picture of Clint Eastwood for a powerpoint presentation in high school. My dyslexic friend typed 'Dirty Hairy' into Images. It was pretty mild for the most part. Except for one really bad result."