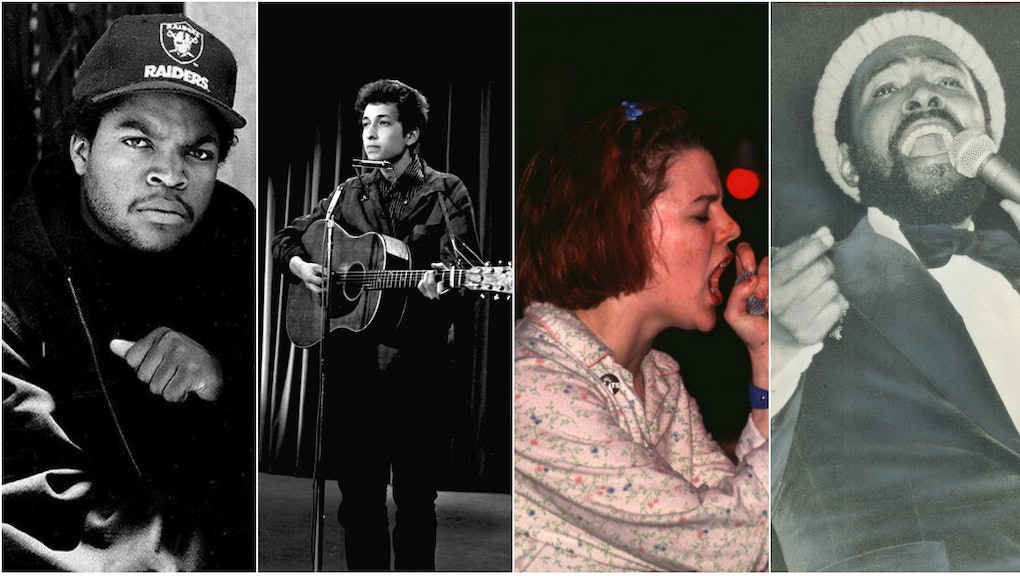 Protest songs are a dime a dozen, but truly powerful protest songs with lasting influence are hard to come by. Starting in the 1930s, Billie Holiday's "Strange Fruit" introduced the idea of an inflammatory, personal ode to protest that could bridge the gap between intellectualism and entertainment. The sentiment that the protest song is dead persists — but that's just not so. Thanks to artists like Kendrick Lamar, that form of protest is alive and well — and it's continuing its role as a vital force in reshaping American life.

Protest songs have always been far more than blatant anti-war statements. They cover topics like female sexuality, black identity and gay rights. In some of the most unexpected and instrumental ways, lyrics have helped shift the culture. Here are 11 powerful songs with lyrics that expanded the American mind:

"The Pill" by Loretta Lynn

When the country singer Lynn released her ode to contraception in the early 1970s, the conservative community was shocked. In a 1975 article about the song, People magazine wrote, "From his pulpit, a preacher in West Liberty, Ky. recently denounced country singer Loretta Lynn and her new song 'The Pill.'" The outcry over the song had the opposite effect, though, and sent people running out to buy the record.

The song helped make female contraception less taboo, and even urged some of the most in need of the pill, those in rural communities, to seek out more information. In an interview with Playgirl, Lynn said rural doctors congratulated her on the song, and told her that it did more to encourage the pill's use than any medical literature ever did.

In 1939, Holiday debuted the song that would go down in history as one of the most haunting, poignant protest songs of all time. And it had an immediate, intense effect on society. The Guardian wrote, "Campaigners for an anti-lynching law posted copies to congressmen. The New York Post's Samuel Grafton [wrote], 'If the anger of the exploited ever mounts high enough in the South, it now has its Marseillaise.'"

The song, written by a Jewish communist named Abel Meeropol and embodied by Holiday, was arguably the very first protest song to earn mainstream status. Decades later, it retained its force as a sample in Kanye West's powerful "Blood on the Leaves."

"Fight the Power" by Public Enemy

Public Enemy wrote "Fight the Power" in 1989 for Spike Lee's Do the Right Thing; Lee told the hip-hop group he wanted them to write an "anthem." "The director may have asked for an anthem for his 1989 chronicle of big-city racial tensions," Rolling Stone wrote, "but what he got was a salvo."

The song turned into a lasting symbol of early-'90s black struggle. "Public Enemy's mission wasn't just to shock us," PBS wrote. "The group was serious about raising consciousness in a culture that had been too focused on excess and self-indulgence."

"American Idiot" came in 2004, just as George Bush and John Kerry battled it out for control of the post-9/11 White House. This song voiced what many Americans saw as a widespread conservative McCarthyism sentiment that prevailed in the country after the war in Iraq had begun. And for millennials, the song and its album were a milestone in their lives.

Consequence of Sound writer Dusty Henry gave the odd pop-punk song its due: "For a 14-year-old kid living in the conservative suburbs, this album was pivotal," he said. "It was the first time I can remember ever discussing politics with my friends and finding out we didn't agree at all. The album was pervasive in that way."

Madonna played an incredibly important role in the sexual liberation of America in the 1980s, and "Like a Virgin" was the centerpiece of that revolution. Salon wrote, "She managed to smuggle the values of the sexually fluid, multiracial art underground into the dead center of American culture before the old-school guardians of moral rectitude could gather their forces to protest."

Madonna presented the idea of a woman who was both respected and sexual, and "Like a Virgin" helped cement the pop queen's status as feminist icon.

"Blowin' in the Wind" by Bob Dylan

No list of transformative lyrics would be complete without Dylan's legendary protest song. He wrote "Blowin' in the Wind" — in 10 minutes, he claimed — in 1962, just as the civil rights movement reached its fever pitch. The song cemented its place in history when, in 1963, Peter, Paul and Mary played it at the Lincoln Memorial moments before Martin Luther King Jr.'s "I Have a Dream" speech.

"You know, there are songs that are more written by their times than by any individual in that time," rock critic Greil Marcus wrote of "Blowin' in the Wind" in his book, The History of Rock 'N' Roll in Ten Songs, "a song that the times seem to call for, a song that is just gonna be a perfect strike rolled right down the middle of the lane, and the lane has already been grooved for the strike. And this was that kind of song. Someone had to write this song."

"What's Going On" by Marvin Gaye

Gaye wrote "What's Going On" as a way to express his concern over the Vietnam War; his younger brother served, and sent Gaye letters from abroad. "I realized that I had to put my own fantasies behind me if I wanted to write songs that would reach the souls of people," Gaye said, according to Rolling Stone. "I wanted them to take a look at what was happening in the world."

And the song did just that — it held up a mirror to society. "It was more than just a piece of music," John Legend said when he performed the song at the Hollywood Bowl in 2014. "It was a landmark of social commentary."

When punk-rockers and riot grrrl pioneers Bikini Kill released "Rebel Girl" in 1993, the song was radical. Lead singer Kathleen Hanna's "nonconformist dream-grrrl steamrolled over female stereotypes in rock and the world, evoking revolution with every step," Pitchfork wrote. "The word 'radical' should not be taken lightly here. This band aimed to fundamentally change how people thought about all manner of hierarchy."

Riot grrrl was instrumental in making a space in music for female empowerment. Women-led rock is indebted to the group and their rebel ethos.

NWA's police protest anthem is just as relevant today as it was upon its release in 1988. Though the pioneering song is more broadly about protesting police brutality, rumor has it NWA wrote the song after an incident in which they were held at gunpoint for shooting paintball guns at passers-by.

"The FBI eventually caught wind of 'Fuck tha Police,' and needless to say, they were none too pleased," Byron Crawford wrote for Medium. "They fired off an angry letter to NWA's label, Ruthless Records, which Ruthless then used to generate publicity for the album. Straight Outta Compton went on to sell over 2 million copies."

"Fuck tha Police" had a second life about three years later when Rodney King was beaten by the Los Angeles Police Department.

This 1970 protest anthem, written in response to the Kent State shootings, was released within a few weeks of that massacre. "Crosby, Stills, Nash and Young's remarkable single is arguably the perfect protest song: moving, memorable and perfectly timed," the Guardian wrote. "Even now, it is hard to think of Kent State without hearing that stark accusation: 'Four dead in Ohio.'"

"Ohio" was fiery and divisive. Naming the song one of their top 10 protest songs, Time magazine wrote, "The song was banned on some AM stations but was played on underground FM stations and, unsurprisingly, gained a lot of popularity on college campuses."

People often roll their eyes when they hear "Same Love," but it's worth remembering the scope of its audience. When the Seattle duo released their pro-gay anthem, "Same Love" in 2013, it came at a pivotal point in the fight for gay rights. The New York Times reported the song was the first of its kind — an explicitly pro-gay marriage anthem — to reach mainstream radio and make it into the top 40. It had such far-reaching influence that the New York Times reported its video helped sway voters in favor of gay marriage that November.

"From the start, the duo intended 'Same Love' to have a political impact," the Times wrote. "Some profits from the single were donated to the advocacy group Washington United for Marriage. In October, Macklemore and Mr. Lewis released a video for the song with a rosy depiction of a gay marriage that political organizers said helped influenced the vote."

Similarly, Macklemore used his time at the Grammy Awards to perform an epic marriage of 33 couples with different orientations. It was cheesy, but the point was clear, and millions saw and heard it. Lambert's hook is the perfect distillation of its message.