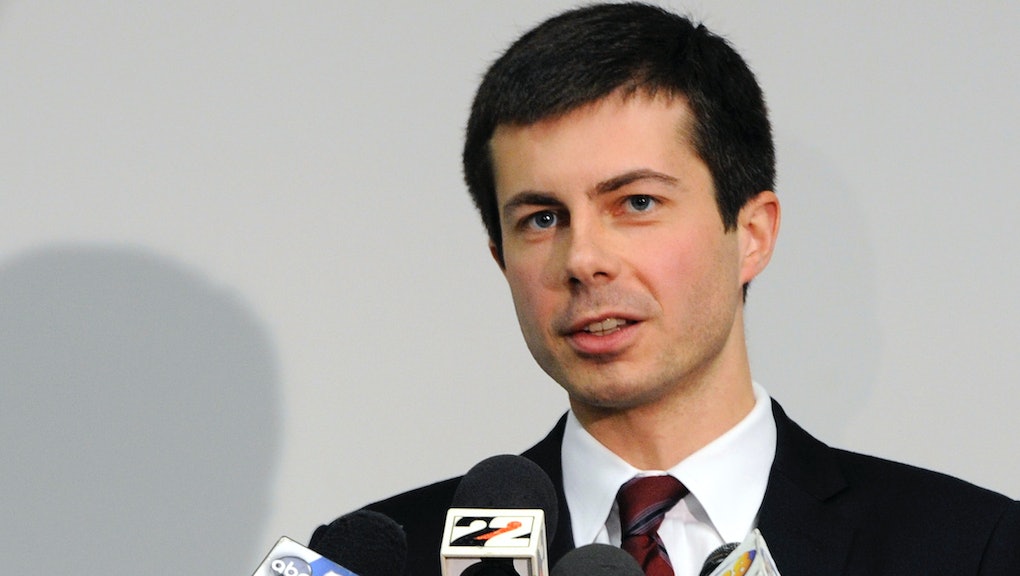 In an editorial published Tuesday morning in the South Bend Tribune, the 33-year-old Democratic mayor wrote, "I was well into adulthood before I was prepared to acknowledge the simple fact that I am gay. It took years of struggle and growth for me to recognize that it's just a fact of life, like having brown hair, and part of who I am."

Buttigieg wrote that despite being a private person, he felt the need to publicly acknowledge his sexuality at a time when public attitudes toward LGBT people are changing rapidly. He wrote, in part:

"... It's clear to me that at a moment like this, being more open about it could do some good. For a local student struggling with her sexuality, it might be helpful for an openly gay mayor to send the message that her community will always have a place for her. And for a conservative resident from a different generation, whose unease with social change is partly rooted in the impression that he doesn't know anyone gay, perhaps a familiar face can be a reminder that we're all in this together as a community."

Buttigieg added he hoped his coming-out story would help embolden people to judge each other "by the things that we ought to care about most, like the content of our character and the value of our contributions." Being gay "makes me no better or worse at handling a spreadsheet, a rifle, a committee meeting or a hiring decision," he concluded.

Buttigieg is widely known as a reformer, who the Washington Post reports has helped South Bend make steady progress since the city's unemployment climbed to 12.5% in 2010. He implemented a widely used 311 system to coordinate calls to city services, attracted new talent to city government and dealt with abandoned properties left behind after the Great Recession.

But it's about local politics too: In his op-ed, Buttigieg alluded to the controversy surrounding Indiana's recent religious freedom law, which the Indianapolis Star wrote "says the government cannot intrude on a person's religious liberty unless it can prove a compelling interest in imposing that burden and do so in the least restrictive way."

Critics labeled the law a deliberate right-wing response to the growing gay marriage movement, as well as an attempt to enshrine anti-gay bigotry with legal protections much greater than those afforded to LGBT people themselves. A wave of corporate and event boycotts hit Indiana after the law's passage.

"This is something that sends exactly the wrong message when we have been working so hard to move Indiana into the 21st century," Buttigieg said in a March 26 speech condemning the law. In an interview later with radio station WTRC, he said "to be moving in that direction when the rest of the country is moving in the opposite direction, I think that sends a powerful message, and not a good one."

Polls in Indiana show while Republicans are fighting hard against LGBT rights, Hoosiers remain relatively evenly split in their support for gay marriage. It's a critical time for equality in Indiana, and Buttigieg seems eager to add to the push.