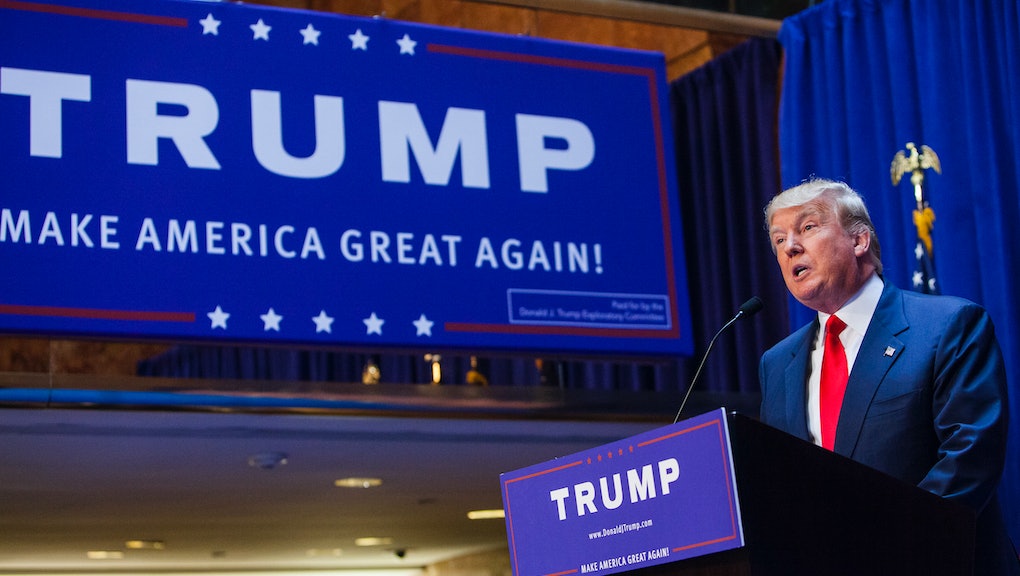 Donald Trump has steered four businesses into bankruptcy, been divorced twice and led countless crusades to find President Barack Obama's birth certificate. On Tuesday, though, a first: Trump announced he is running for president — the 12th candidate in a 2016 Republican primary contest now caught in a manic wobble between tragedy and farce.

After years of threatening to take his cheap talents on the campaign trail, the "very rich" real estate magnate turned reality TV host, speaking from his eponymous Trump Tower in Midtown Manhattan, said he would finally be going through with it.

Promising to "take the brand of the United States and make it great again," Trump declared, "I am officially running of president of the United States" as the emcee prematurely hit play on Neil Young's "Rockin' in the Free World." Trump startled, then nodded along with the Canadian rock legend's guitar, before picking up his freewheeling commentary on the dire state of the U.S. war with the Islamic State group, tax and trade policies and the relative merits of Obama as national "cheerleader."

As part of his official entry into the GOP contest, Trump is compelled by law to disclose his net worth to the Federal Election Committee. Many observers believed his desire to keep that information private — for fear it was not quite as impressive as he suggests almost daily on social media — had been one of the reasons Trump had for years merely flirted with but never actually conceived of a run.

But those suspicions, at least according to Trump and a team of creative accountants, is nearly $9 billion. Unofficially. "Everything will be filed eventually with the government," he said. "We don't need extensions."

Why, why, oh why? Because Trump wants to be on TV is the simple answer. He also wants to be quoted in spaces like this, so mission accomplished on that front. But more broadly, Trump looked at the GOP field and quite aptly identified it as a morass of mediocrity and half-baked ideas — that is, the kind of competition in which he would flourish.

Ironically, Trump's entry will likely mean at least one of the nominally more serious candidates will not make the first debate stage Aug. 6 in Cleveland. Fox News and its partners have declared that only the top 10 best polling candidates will be offered a podium and, for now at least, Trump makes the cut, with 4% support, according to the latest Fox News survey.

Despite his significant personal riches — give or take a few billion from Tuesday's estimate — Trump will also be looking to cash in on the circus he is about to join. Running for president is a lucrative business. Candidates like Rick Santorum, the former Pennsylvania senator, and Arkansas governor-turned-Fox News host Mike Huckabee have made small fortunes by spinning their modest successes on the trail into speaking and television gigs and big money book deals.

The coming months will offer Trump more free publicity and attention than NBC, home to his possibly suspended Apprentice franchise, could ever properly deliver. The candidate left 5th Avenue after Monday's announcement for a flight to Iowa, home to the first 2016 primary contest, where he will hold a press conference at 5 p.m. in downtown Des Moines.

Democrats' delight: Trump had not yet finished his grandstanding when the Democratic National Committee released a glib welcome to the GOP race, which Bush officially joined less than 24 hours earlier.

"Today, Donald Trump became the second major Republican candidate to announce for president in two days," DNC Press Secretary Holly Shulman said in a statement, "we look forward hearing more about his ideas for the nation."

Politics may be full of lies, half-truths and distortions, but not here. The Democrats' glee is real. For Republicans, especially those hoping to break through the mess of humanity, so too is the coming charade.