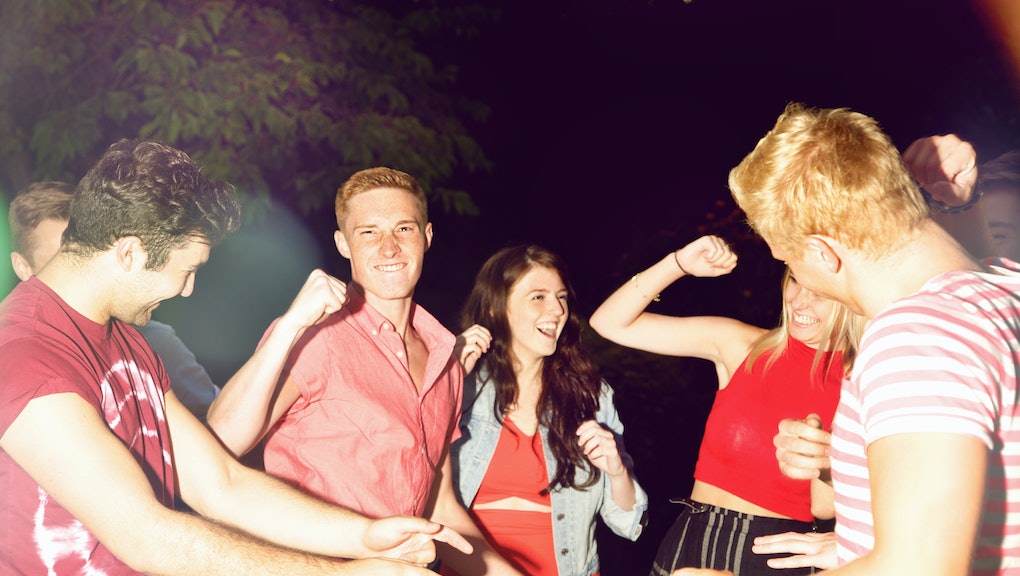 It's called a Jack and Jill.

Or a Jack and Jack. Or a Jill and Jill. Or a Stag and Doe. Or a Buck and Doe.

No matter what you call it, this gender-neutral extravaganza is the best pre-wedding event you've never heard of — and it could put an end to the bridal shower fatigue that ruthlessly plagues women when weddings roll around.

The no-bullshit festival: Put simply, a Jack and Jill is a large fundraising fiesta for friends and family for which guests pay an upfront ticket price.

Don't freak out at the cringe-inducing words "fundraising" and "ticket price." With a J&J, the weirdness of registering for expensive gifts that you don't need and forcing your friends to pay for them is eliminated in favor of a no-bullshit cash admission price, usually as low as $10 to $15 per person.

Given that the average American wedding now (supposedly) costs $31,213, even couples lucky enough to have parental assistance could use a little extra cash ahead of their wedding — not to mention a kickass celebration. J&Js are an all day day-drinking fest that can get pretty rowdy.

"We're glad we chose to have a Jack and Jill," Amy*, a recently married 31-year-old from Hartford, Connecticut, told Mic. "Everyone enjoyed themselves, and the money we received helped a great deal in paying for the wedding."

No lame gifts, no gender divisions: Jack and Jill parties are also inclusive, with much wider guest lists than the actual wedding.

"Everybody that you love and care about can be in the same place at the same time. Plus invitations extend beyond your wedding list, so the party can be pretty big," said Claire*, a 30-year-old J&J supporter from Cromwell, Connecticut.

When Mic asked Claire if she felt like she should have had a traditional bridal shower instead, she replied, "Hell no."

Claire's husband Tim*, 29, agreed. "Jack and Jills are definitely better. Not that I've ever been to a bridal shower."

Tim and Claire held their J&J, a barbecue, at a rented outdoor park space and charged $25 for single tickets and $40 for couples. In exchange, guests were treated to a food buffet along with unlimited drinks, games and raffle opportunities ranging from tailgate gear to an iPad. The upfront costs of the event were covered mainly by the bride and groom, while the wedding party donated raffle items and made food and drink contributions on a volunteer basis. In other words, it was a win-win for both the couple and their guests.

As one 28-year-old female who has attended numerous J&Js told Mic, "I'd much rather show my support by purchasing a $20 ticket and drinking all day with my friends than charging something at Macy's and having to sit through yet another game of bridal shower wedding trivia."

A regional quirk: So are J&Js totally tacky, or utterly essential? That depends on where you're from. "In some areas, Stag and Does are so culturally ingrained that couples will get grief from their families if they don't agree to do one," Ariel Meadow Stallings, founder of Offbeat Bride, told Mic. "In other areas, the whole concept of a pre-wedding fundraiser is the stuff of pearl-clutching etiquette horror stories."

And more often than not, unless you live in one of those "culturally ingrained" areas, you haven't heard of them at all.

"We're pretty up to date on what people are doing, but I've never heard of that," Jamie Miles, managing editor of the Knot, told Mic when asked about the concept. "Gender-neutral couples' showers are absolutely a thing," she said, but went on to explain that they are essentially just unisex bridal showers with less traditional rules.

A scan of online media coverage suggests that J&Js are a popular tradition in the Manitoba and Ontario provinces of Canada. (Wikipedia proves its claim that they are "very uncommon in the United States" by failing to even cite one U.S. source in which they are mentioned.)

One American hotspot is central Connecticut, possibly due to its proximity to Canada. But even then, they're not a statewide trend. Connecticut's official state historian, Walter Woodward, told Mic in an email that he had heard of J&Js but was unsure of exactly how they ended up becoming such a prevalent tradition.

Day drinking for the happy couple: Regardless of where J&Js come from, those lucky enough to score a Jack and Jill invite should count their blessings. For couples getting married, they can be an essential source of financial help. For everyone involved, they're a great excuse to party and let loose with those who matter most.

"We did end up profiting from our Jack and Jill," Claire told Mic. "But it was more about just having a great time with friends and family."