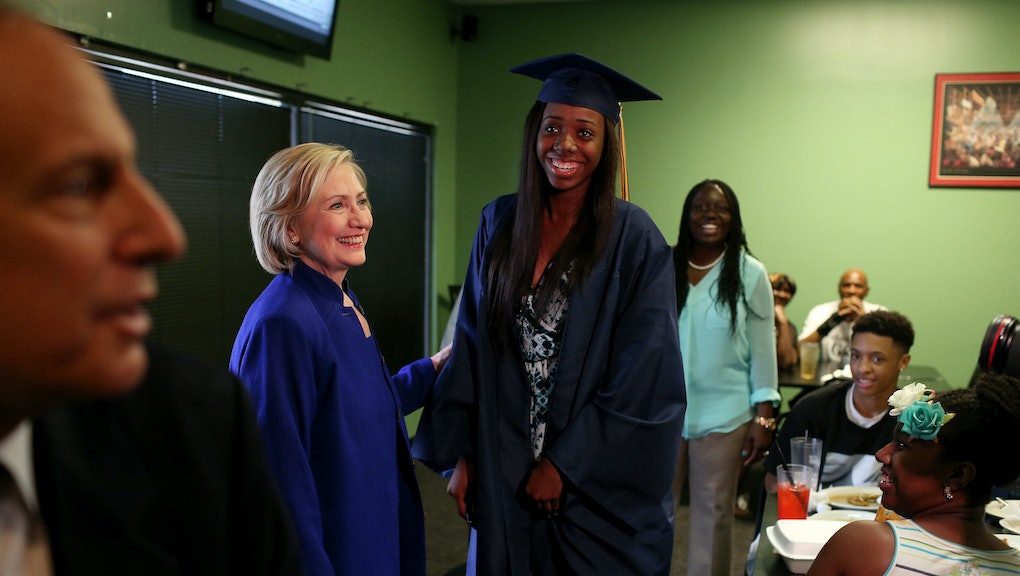 At a forum Wednesday in South Carolina, Hillary Clinton will introduce a proposal that would offer businesses a $1,500 tax credit for every worker hired to a government-rated earn-and-learn apprenticeship.

The program, meant to target stubbornly high unemployment rates among young Americans, would require apprentices to be registered with state or federal regulators, and make qualifying apprenticeship programs subject to standards and outcome measures, according to a senior campaign aide.

Clinton's return to South Carolina for an event at Trident Technical College in North Charleston marks the third leg of a whirlwind tour of early primary states following a campaign launch event Saturday. In New York, Clinton spoke in broad terms of her commitment to shared prosperity and progressive solutions to inequities in the job market.

But persistent demands for more specifics, led by Democratic primary opponents Sen. Bernie Sanders (I-Vt.) and former Maryland Gov. Martin O'Malley, now has the campaign promising to roll out a series of detailed policy ideas over the course of the summer.

On Thursday, Clinton will take aim at workers between the ages of 18 and 34, for whom the May jobless rate grew to 7.8%, more than two points higher than the national average. Among young African-Americans, that figure jumps to 14.6%:

Upping the ante: Though more prominent in a number of Western European countries, government-regulated apprenticeship programs have a history in the U.S. dating back to 1937, when President Franklin D. Roosevelt signed the National Apprenticeship Act.

The goal then was to protect young people working as apprentices from predatory business owners. More recently, the Obama administration in March set aside $100 million in federal funds to facilitate job training for individuals in "technology and other in-demand fields" with "evidence-based strategies" like Registered Apprenticeships.

In 2014, the think tank Young Invincibles cited Labor Department statistics in a report that found apprenticeships to be "extraordinarily profitable for the federal government, resulting in $50 in government revenue for every federal dollar invested, an eye-opening 5,000% return on investment."

The campaign will likely point to the latter estimates to answer critics concerned about the cost of handing out what Clinton hopes will be millions of dollars in new tax credits to employers.

To young voters, the pitch is simpler: According to research published in 2012 by Mathematica Policy Research, young people who participated in Registered Apprenticeship programs (there were 450,000 on the roll in 2010) "earned an average of $5,839 more than similar nonparticipants."

Over a lifetime in the workforce, the estimated earnings advantage for apprenticeship program alumni is nearly $100,000. And that doesn't begin to account for the cash saved by forgoing expensive, if in certain cases unnecessary, higher education programs which contributed to making the Class of 2015 the most heavily indebted in American history.