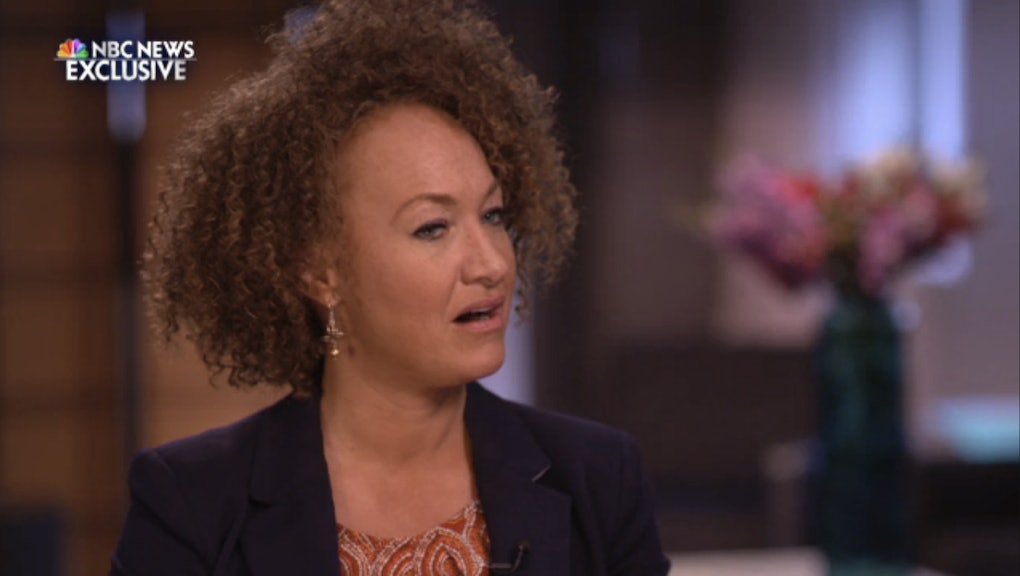 In One Quote, Rachel Dolezal Just Made Her Most Bizarre Claim Yet

Rachel Dolezal, the white woman and former NAACP chapter president who was caught lying about being black, still insisted she is not white in an interview Tuesday night with NBC News' Savannah Guthrie.

Dolezal spent the day doing a number of interviews on different NBC shows after the network landed an exclusive with the woman whose bizarre story whipped up a media frenzy in the last week.

When asked what race she is, Dolezal declared, "I am definitely not white," contrary to pictorial evidence from her childhood and what her alleged Caucasian parents say.

Dolezal said everything about her is black, from her culture to her lived experience.

During the interview, in response to Dolezal's insistence she's black, Guthrie pushed on the matter of her having white parents, at which point Dolezal denied they are her biological parents.

Guthrie then asked Dolezal who her mother and father were, if Larry and Ruthanne Dolezal were not her parents, causing Rachel to stumbled through a response. "Well, I don't know. You know, like I said, I just don't feel like I can necessarily say now with the full scrutiny of can you prove you're Larry, Ruthanne's biological child, that actually has never been proven."

When explicitly asked if Dolezal ever lied about her race, she said there were "moments of nonfiction."

"I really feel like there have been moments of some creative nonfiction where I, in order to again survive or protect people that I love, I have, um, kind of had to explain or justify some of the timeline or logistics of my life in a way that made sense to others."

Dolezal began the day with a Matt Lauer interview on the Today show, in which she said, "I identify as black." She ended the day by declaring, "I am black."

After rumors circulated about Dolezal's duplicity, local media contacted her alleged biological parents — a Caucasian couple with a birth certificate including their and Dolezal's names — who said she was unequivocally white.

"She's our birth daughter and we're both of European descent. We're puzzled and it's very sad," Larry Dolezal told BuzzFeed.

Evidence available to the public strongly suggests Dolezal, despite her protestations, is white. Her Caucasian parents with a birth certificate, the photographs of her transformation, anecdotal accounts of her duplicity and the lawsuit against Howard University for racial discrimination because she's white all pull apart her narrative. Rather than verifying her "authentic self," the interviews appear to reveal the delusions of a woman not in touch with reality.