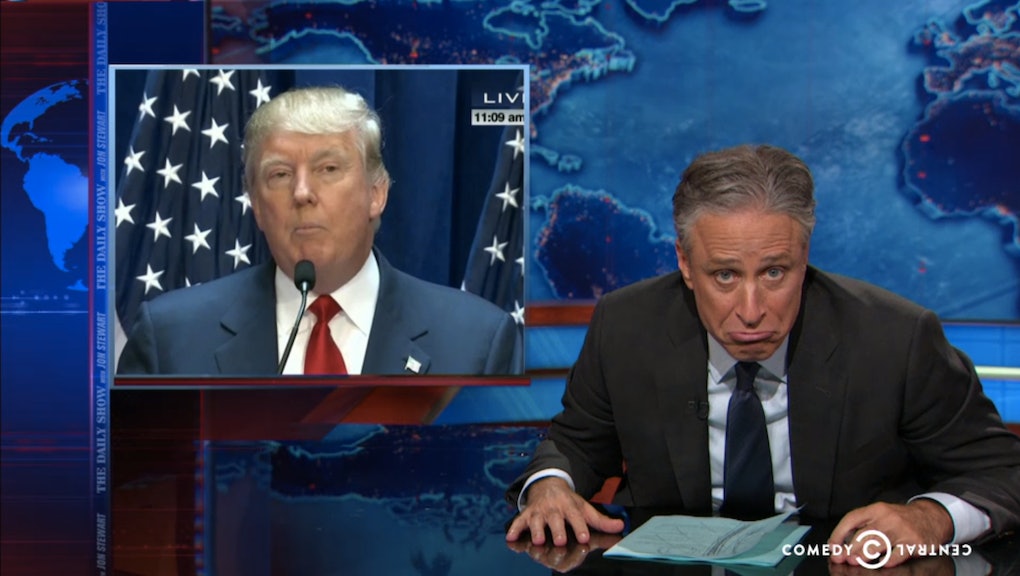 The comedy gods delivered a great bounty when billionaire real estate magnate and reality star Donald Trump announced Tuesday he would be a candidate for president of the United States.

So on that night's edition of the Daily Show, host Jon Stewart wasted no time going after the man regular Daily Show viewers know as "Fuckface Von Clownstick."

After a montage of the broader overview of the presidential primaries and the usual silliness in speeches by somewhat more serious contenders Hillary Clinton and Jeb Bush, Stewart moved on to Trump.

The Daily Show first lampooned Trump's entrance that included a slow descent down an elevator to the sounds of Neil Young's "Rockin' in the Free World," before moving on to the Donald's campaign announcement, which Stewart summarized as:

Diving into Trump's roughly 30-minute, head-scratching speech, Stewart picked apart some of the best examples of strangeness, like when Trump warned of the imminent dangers of Mexican rapists.

Trump assumes — since, unlike the other things mentioned — we can't be sure of that last one.

"It's amazing! America's id is running for president. Trump is the part of your brain at 3 a.m. that's like, 'Let's go take a shit in a mailbox. Come on, who's gonna know?'" Stewart continued.

While the Trump announcement could be seen as a cruel irony for Stewart given his imminent retirement, the host saw the silver lining reminding viewers of the joy it will give him in his final weeks, which he likened to a "comedy hospice."

All joking aside though, Trump's presidential plans have the potential to seriously shake up the Republican race. In May, Fox News laid down its official rules for the first Republican primary debate of the season, saying it would limit the field to the top 10 candidates. With Trump's name recognition, he seems certain to make the cut and ironically deny a spot to a potentially more serious contender. Further, with his vast personal fortune, Trump wouldn't have to rely on the Koch brothers to finance his bid and with only a fraction of his wealth could afford to flood airwaves in Iowa to New Hampshire and beyond.

Americans often say with pride just about anyone can grow up to be president one day. Nobody proves the argument truer than Trump or highlights its equally well-known corollary: If you are a long-shot presidential candidate who wants to be taken seriously, it helps to be a billionaire.