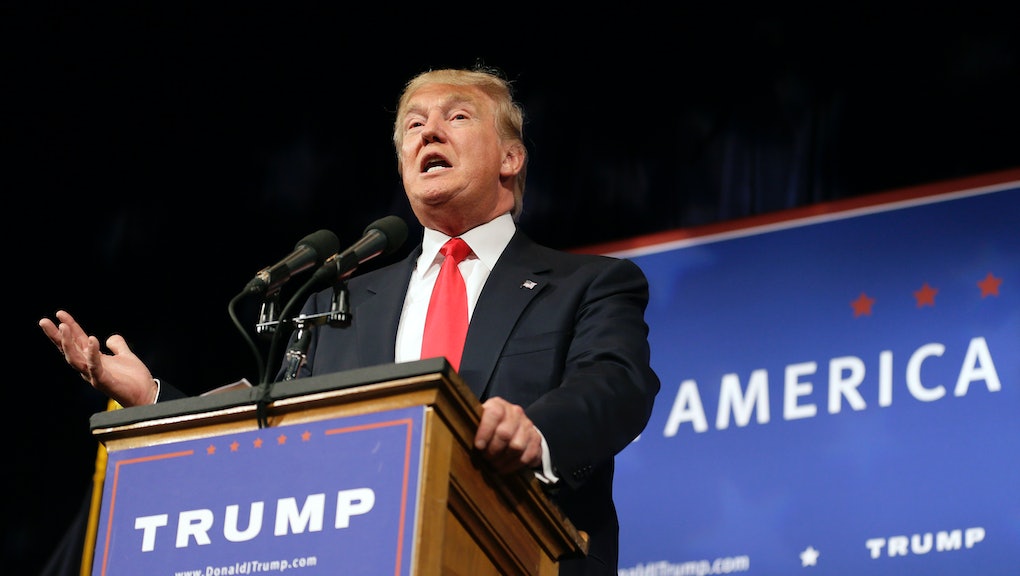 Why Donald Trump Is the Rachel Dolezal of American Politics

This week, a pathological liar with a Mystic Tan and hair that has spawned dozens of thinkpieces is on a nationwide media blitz, voicing bizarre opinions on complicated issues to anyone holding a microphone. This person's shameless bid for media attention has succeeded beyond their wildest dreams, wresting the national conversation from people and things that matter in exchange for a celebrity of which most of us can only dream.

Are we talking about former NAACP chapter president/white person Rachel Dolezal, or lattice-haired clown and current presidential candidate Donald Trump? At this point, there's not much of a difference.

The similarities are striking: Superficially, the phenomena inspired by Dolezal's racial identity crisis and Trump's candidacy couldn't be more different. Trump is a billionaire(?) with a private Boeing 757 and a reality television franchise that beams his face into millions of American homes. Since the 1987 release of The Art of the Deal, Trump has invited all of America to squire in his never-ending quest for attention. His name has graced bottled water, steaks, phallic condo towers, colognes and even his own brand of vodka. Publicity replenishes the man's electrolytes.

Dolezal, on the other hand, grew up in a teepee rural Montana. Excepting the occasional newspaper interview or potentially falsified police report, she seemed content to live her life as a civil rights activist and part-time "Ethnic Hair Stylist" in Spokane, Washington, until an uncomfortable interview with a local newscaster made her a global trending topic.

But their respective announcements — Dolezal's, that she identifies as a black woman, and Trump's, that he is finally running for president  — have both been greeted by the American public with identical blends of bemused fascination. People don't know whether to roll their eyes at the absurdity or to obsessively read four more articles on their hair length, color and style, and have decided to split the difference by doing both. But the appropriate reaction to Trump's candidacy and Dolezal's public unravelling isn't fascination or smirking amusement. It's despair.

Cultural hijacking: Trump's candidacy is as bad for American politics as the Dolezal media circus is for American racism. Although their stated agendas — to make America "the classiest, most established, most admired place in the world" and to "carry forward in my journey and life continuum," respectively — are distinct, their silencing effect on debates that will shape the future of the United States are identical.

Trump will never, ever be ignored. Americans desire fame and fortune more than anything, and Trump has an abundance of both. By virtue of his bombastic personality and stratospheric profile, Trump is out-polling enough established Republican candidates to win a spot on the first presidential debate in August. Republican leadership, which had expressed high hopes for avoiding a repeat of the 2012 Candidate Clown Car, will now have to contend with a man who's part Bozo, part Krusty and part Pennywise all at once.

Trump's mere presence on the dais alongside legitimate candidates will seize the full attention of a voting public that's supposed to be deciding who will be the next president of the United States. He may not have any concrete ideas — although his Great Wall of Mexico plan would likely involve a great deal of concrete — but he's exciting and unexpected, like a car crash on the interstate. And much like that car crash, he'll attract the eyeballs of every rubbernecker who slows to get a look at the burning wreckage.

Chris Christie, Marco Rubio and Jeb Bush can't hope to compete with such a legendary showman — but they will try. Hoping to grab even a fragment of the attention shining on Trump, more legitimate candidates will have to stoop to cartoonish antics and chicanery, debasing their candidacy with cheap laughs. Through the toxicity of his mere proximity, Trump will drag down the legitimacy of any candidate around him — an unmistakable Cone of Ignorance.

Likewise, a national conversation on the systemic racism faced by African-Americans was hijacked by Dolezal's declaration of a "transracial" identity. It took dozens of black men being shot by police officers in high-profile incidents to draw the attention of national media organizations. It took Dolezal one ill-considered interview with a local ABC affiliate to derail it. Only a white woman could get this much attention for being black.

The debate over the institutional racism of American police forces has, at least momentarily, evaporated in the heat of media stupidity, as pundits ignore the stories of black men and women combating true oppression in favor of a white lady with a weave.

But attention doesn't equal legitimacy. Their high profiles and unhinged on-camera appearances may have turned Trump and Dolezal into trending topics worldwide, but their places at the center of political and cultural conversation has shoved worthier people, causes and candidates to the periphery. Attention is a finite resource — every line read in a hot-take reaction to Trump's rambling campaign launch or Dolezal's latest NBC interview is a line in a story about police brutality or student loan debt that goes unread.

The questions that accompany the conversations Trump and Dolezal have brought up (either accidentally or on purpose) are important: How do we address the immigration crisis? How do we combat racism in the United States? But we're never going to find the answers to those questions if we keep paying attention to frauds like them. They're slowing down the progress of all mankind.