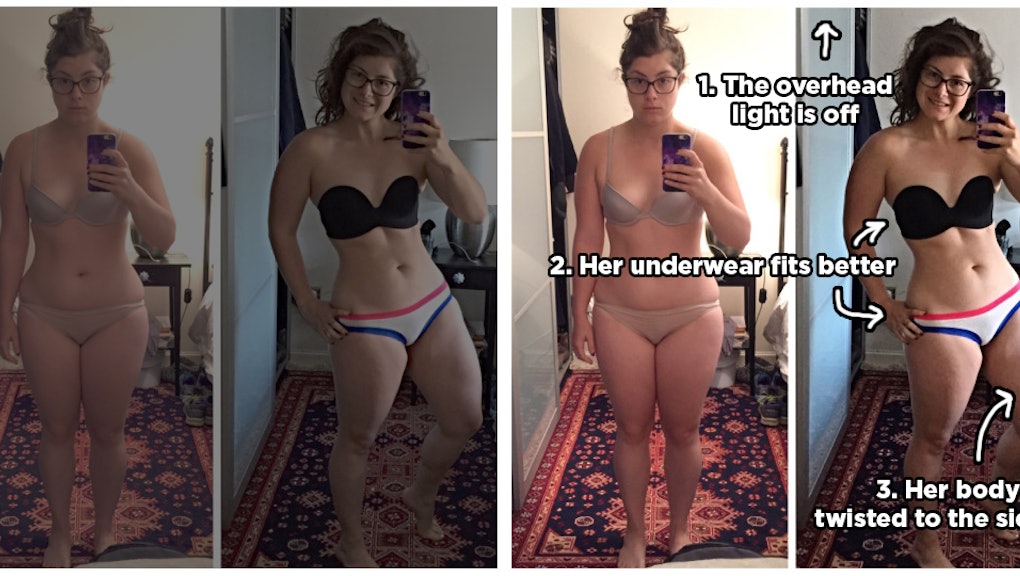 #Fitspo is everywhere. From Instagram to the subway, photos of toned, tanned and fitness-obsessed bodies lurk behind every corner, flaunting their athleticism and beach-ready physiques.

One woman, however, is out to prove how misleading the hashtag — short for "fitspiration" — can be.

Sophie Kay, a personal trainer based in London, recently posted the following side-by-side photos to the blog of Fitology, the company she works for:

Though it resembles a typical "before and after" or "progress" shot — photos taken at difference times to show the change in body shape due to exercise or eating well — Kay revealed she had taken the two photos a mere three minutes apart.

Can you tell what the differences are?

"There are various things you can do to create the perfect selfie," she said. "All I did in the three minutes between the two photos was to turn off the overhead light, put on underwear that fit better, twist my body slightly to the side to show off my best angle, flex and, of course, add a filter."

What's more: Kay looks sad in the "before" shot, but she's smiling in the "after" photo.

Good lighting, a good posing game and clothes that fit properly can make a world of difference — and give off a false impression of what someone actually looks like. "So don't pay much attention to those 'before and after' shots!" Kay wrote, stressing that not all healthy bodies look the same. "I prefer a bit of definition and that's about it for me!"

"Social media has totally changed girls' and women's body perceptions because we're bombarded with these images 24 hours a day with no escape," Kay told People. "There's also pressure on women to post amazing photos of themselves online, which doesn't help."

She's not the first to demonstrate this trick. In August 2013, Gawker reported the tricks Mel V, a personal trainer, used to illustrate how deceptive "before and after" photos in weight loss supplement ads could be.

Mel V's blog is no longer active, but Gawker has a snippet of her explanation:

Check out my transformation! It took me 15 minutes. Wanna know my secret? Well firstly I ditched the phonewallet (fwallet) cause that shit is lame, swapped my bather bottoms to black (cause they're a size bigger & black is slimming), Smothered on some fake tan, clipped in my hair extensions, stood up a bit taller, sucked in my guts, popped my hip- threw in a skinny arm, stood a bit wider #boxgap, pulled my shoulders back and added a bit of a cheeky/Im so proud of my results smile. Zoomed in on the before pic- zoomed out on the after & added a filter. Cause filters make everything awesome.

In July 2013, the Huffington Post published an essay by personal trainer Andrew Dixon. His conclusions were similar to Mel V's and Kay's: The flawless "before and after" and #fitspo selfies you see on Instagram may not be as truthful as they seem.

Using a variety of methods — shaving, sucking in, better lighting, flexing — Dixon produced the following "transformation" in less than an hour:

"Don't try to look like anyone you see in a transformation photo. Be inspired, but don't be disappointed if you don't see yourself the way you see those models," he advised.

While the at-home transformations — the ones that Kay was referring to, and those that fitness guru Kayla Istines features on her Instagram account — are vastly different from professionally Photoshopped marketing campaigns, the basic idea is the same: Use deceptive techniques to embellish how far someone's body has come.

But falsifying health in this way is harmful, particularly because of the fetishistic way we've come to treat bodies on social media. "At its most benign, 'fitspo' ... provides a gentle, visual nudge to eat more kale and go to the gym on Mondays," the Guardian's Roisin Kiberd wrote in April. "At its most dismal, it's an addictive feedback loop of judgment and self-loathing."

Used in moderation, #fitspo certainly isn't the worst thing in the world — proponents have even described it as "empowering." But as Kay and others have pointed out, what you see isn't always what you get — something to keep in mind the next time you scroll through Instagram in a panic because you don't look like the taut beach bods dotting your feed.