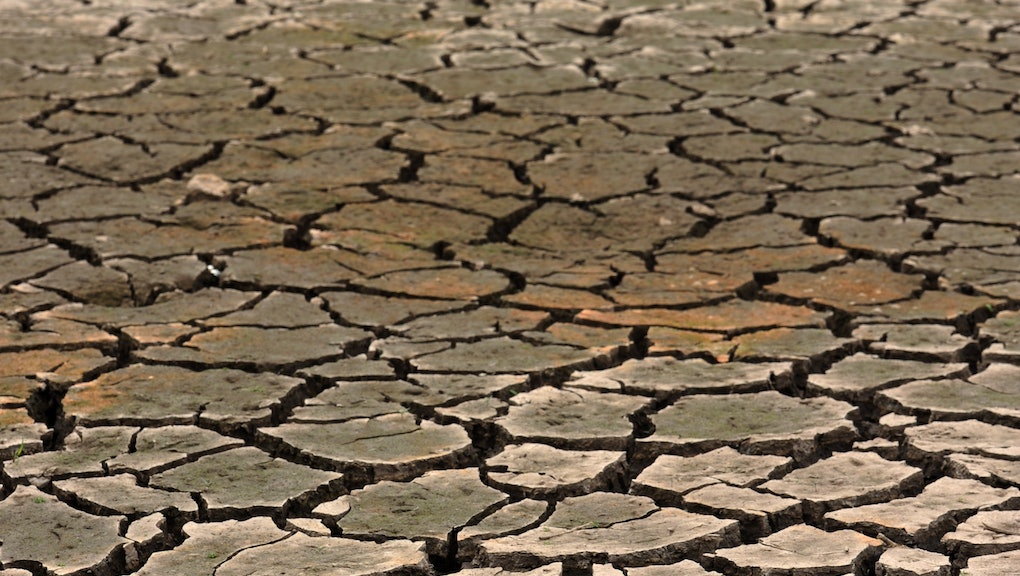 According to NASA Data, We're Running Out of Water and We Don't Even Know How Much Is Left

Humanity is taking a Big Gulp-sized chug of the Earth's dwindling groundwater reserves.

A study published in Water Resources Research by University of California, Irvine experts has found one third of the world's biggest aquifers are being drained by people faster than they can replenish.

The research indicated global freshwater reserves are both smaller than previously thought and shrinking as a result of humanity's unquenchable thirst for water in agriculture, industry and sanitation. By some accounts, global water consumption from the world's largest aquifers has increased by a factor of five over the last 50 years, and is on a steady increase, study lead author and UCI doctoral student Alexandra Richey told Mic over email.

Troublingly, the worst-off groundwater reserves tended to be in developing regions like North Africa, India and China, as well as the Arabian peninsula. But deposits were also doing poorly in the American Southeast, parts of Europe and western Australia.

The research: The team used NASA's twin GRACE satellites to measure subtle variations in the Earth's gravitational pull to detect amounts of water under the planet's surface. They focused on studying the world's 37 largest aquifers from 2003 to 2013.

The results were distressing. Of the 37 aquifers, eight are overstressed from both intensive human drilling and little to no natural refilling capacity. An additional five were found to feature extremely or highly overstressed levels of depletion with varying levels of natural replenishment. All told, 21 of the 37 aquifers were deemed to have lost water during the 10-year study.

We're running out, but how soon? This is where it gets tricky. The satellite-observation method is imprecise enough that the UCI team couldn't tell whether the aquifers are headed for a dusty doom within decades or will persist for hundreds or thousands of years. This uncertainty only makes the questions more pressing, especially since humans are only really getting started draining groundwater in parts of China, India and the African continent.

"Consumption will continue to increase as agriculture expands, very likely in parts of Africa that have yet to experience the kind of Green Revolution of India," Richey said. "The hope is that it happens with improved water use efficiency and 'lessons-learned' from past over use of resources, but who knows."

That "who knows" sentiment is what's disconcerting, and what needs to be addressed going forward. Fortunately, some places have already started taking steps in this direction.

"Places like the US have the ability to decrease consumption even and population grows by being smarter about how we use water, but we haven't gotten to where we need to be yet," Richey said. "We need to look to places like Israel that start with already brackish water or recycled wastewater for irrigation."

Climate change is expected to make the problem worse. While most water humanity uses still come from the seasonal water cycle and precipitation, the Washington Post notes 35% of it is still provided by underground sources. During droughts, water-starved locales often turn to groundwater even more to fill the gap. Other NASA research has indicated global climate change is putting the world at risk of much more common and severe mega-droughts that could last years or even decades.

"We already use more groundwater during drought when less surface water is available so if drought is more frequent, there is less time for that aquifer to rebound between drought events," Richey said. "Parts of the world with increased likelihood for flooding could also have more severe water stress since floods happen so quickly we aren't able to capture the water and store it for future use."

Talking to the Washington Post, UCI professor and NASA Jet Propulsion Laboratory scientist Jay Famiglietti was more blunt: "The water table is dropping all over the world. There's not an infinite supply of water."