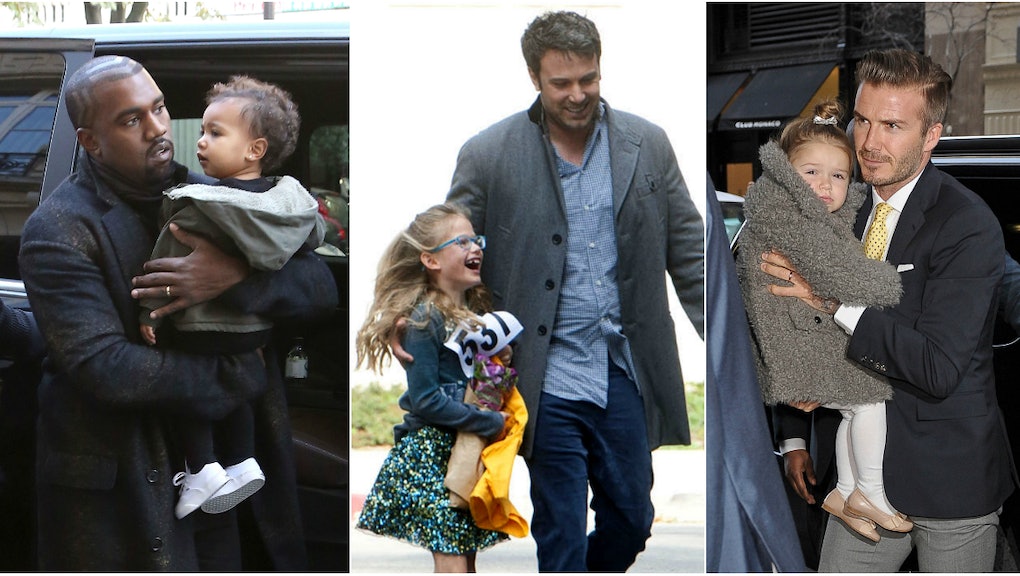 If there's one thing that can completely change how a man views half the world's population, it's becoming a father.

At least, that's the impression you can get when you listen to men wax poetic about how they came to a huge feminist epiphany about the problems, issues and stereotypes women face "once they had a daughter."

Writer and comedian Lane Moore nailed this problem on the head with a recent tweet (timed perfectly for Father's Day, no less):

"Dad feminism": The "only once I had a daughter" sentiment has become a regular one, with men copping to changing their views on typical "women's" issues like raising a family, body image, dating and sex only once they've become a certified dad to a darling baby girl.

In a February 2015 interview with Complex magazine, none other than Kanye West admitted to having "dated" and "degrading" views about what women should wear. That is, he did before his daughter North was born in 2013:

"I realized that I wasn't respecting women the way I needed to... God has an amazing way of teaching people, and literally for two years I lived with all alpha females and a daughter, you know? [Laughs] So I had to learn to really do what my mother taught me, and become the man she always knew I could be."

In 2014, when President Barack Obama created a task force to protect students from sexual assault, Obama's senior adviser Valerie Jarrett told the Huffington Post, "The president is committed to solving this problem, not just as president of the United States, but as a father of two girls."

And in an essay on the Huffington Post, new dad Bret Spears wrote, "No one ever told me that having a daughter would automatically turn me into a feminist." For Spears, that included discovering that men could enjoy stereotypically gendered things like manicures and tea parties, and that women develop feelings at a young age.

Of course, these are all takeaways that someone shouldn't need to be a father to discover. Welcome to Dad Feminism.

Seeing women as individuals: The problem with these Feminist Dad revelations is not only how they expose men's gender blinders, the ones that cause them to navigate the world (up until those bundles of female joy arrive) without any awareness of gender norms, standards or limitations.

Dad Feminism also makes it apparent that a man is only valuing and defining women "by his relationship" to them. If women don't really count for consideration until they're seen as daughters, then they're not truly being considered as individuals.

"A friend with young daughters said he has trouble going to strip clubs because the strippers are someone's daughter," Reddit user dorfalle commented on one thread about how daughters changed men's views of women.

"It's given me a much more complex view of women, to be sure. Instead of the superficial impression I used to accept, I definitely notice those things that remind me of my daughter ... I'm much more sensitive to overly sexualized toys and entertainment," Reddit user createdforth said.

Those strippers or sexualized Hollywood stars are people, plain and simple, regardless of who they're related to. Those who require fatherhood to awaken that awareness are failing to see women as people, unconditionally.

Paternalism vs. concern: That that can veer into dangerously paternalistic territory. When Nicki Minaj debuted her provocative cover art for Anaconda, concerned dad Chuck Creekmur took to an open letter to tell Minaj that since he'd become a father, her image was unacceptable. "As a man, I can appreciate the virtues of your perfect posterior," he wrote. "The dad guy is not a happy camper, particularly now that his lil' girl is transitioning into a young lady."

As New York magazine's Kat Stoeffel wrote, "Even the most basic principles of gender equality sound unctuous when they're delivered in the form of a fatherly reminder that Daddy's Little Princess deserves feminism."

That paternalism isn't just talk. The National Bureau of Economic Research found that when a legislator has a female child, it "increases the propensity of a member of Congress to vote liberally on women's issues, particularly reproductive rights."

About knowing women as a whole: What's so wrong with coming to your feminist "ah-ha" moment once you have a baby girl — better late than never, right? A blog called Suddenly Feminist Dad charts the journey of a man navigating gender inequality in the wake of becoming a father. "I have a daughter now, so I guess I'd better figure out this feminism thing," his bio reads.

But lovely as these 180s are, chances are, unless you've lead a particularly busy life, most women in the world aren't your daughter — about 3.5 billion women aren't, in fact. Fatherhood shouldn't be the first time men recognize women as fully nuanced, complex human beings.

Hopefully that's a realization a future dad would come to through interactions with his mother, his classmates, his friends, his sisters, the women he works with and, you'd hope, the mother of his own child.

And if that sounds unrealistic, just think of it this way, as Mallory Ortberg put it in a parody on the concept for The Toast:

"Before I had daughters ... I would follow women into voting booths and knock their hands away from the lever whenever they tried to engage in the democratic process. Who knew having daughters would change all that? Not I. Personally, now that I have daughters, I don't think anyone should do bad things to women."