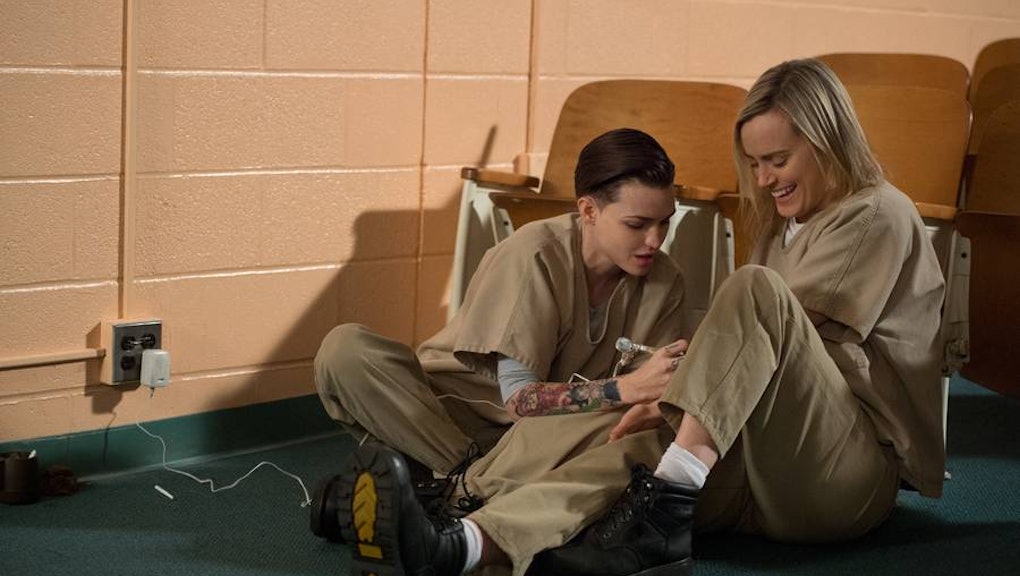 What Our Obsession With Ruby Rose Says About Women and Sex

First of all, Australian DJ, actress and model Ruby Rose is gorgeous and cool. Let's clap it up for the writers and producers of Orange Is the New Black for casting her as a new inmate at Litchfield Correctional Facility this season:

Interestingly, this has translated to straight women learning what queer women have known for a while now: Ruby Rose has got it going on. In fact, some are saying they'd be down to have her be the Alex to their Piper.

That's cool, but... Sure, some of these statements are just cheekily pointing out that Ruby Rose is hotter than your average inmate, but others miss a chance to recognize the nuance of sexuality. Stating that you'll "go gay" for Ruby Rose's Stella ignores bisexuality, pansexuality, queerness, sexual fluidity and even just the notion that a woman who has predominantly been attracted to men can also be attracted to women — or just one woman.

Instead of recognizing their own sexuality as perhaps being something different from strictly gay or straight, these women are carrying on with a sort of internalized homophobia, in this case the idea that to entertain same-sex attraction at all is to be gay. As it relates to Ruby Rose, this may stem from a reluctance to entertain the idea that they might simply be attracted to people who aren't heterosexual, cisgender men (which is fitting, as Ruby Rose is openly gender-fluid and prefers female pronouns).

Sexual fluidity isn't a fad: There's the Kinsey scale, developed by iconic sex researcher Alfred Kinsey, who determined human sexuality exists on a scale of 0 (exclusively heterosexual) to 6 (exclusively homosexual). More recently, researchers like Lisa M. Diamond have focused on women's gradient scale of sexual desire and identity. In her 2009 book, Sexual Fluidity: Understanding Women's Love and Desire, Diamond explores the ever-evolving sexuality of women within their lifetimes, noting that for "some women, love and desire are not rigidly heterosexual or homosexual but fluid."

There's nothing wrong with being a woman attracted to another woman or someone who expresses themselves as such. We can all own it — maybe there's a decimal on the Kinsey scale for those who identify as Ruby-sexual. But talk of "going gay" for Ruby Rose makes being gay sound like it's a quick and easy choice (and the only choice). Besides, aside from how to make shower shoes out of duct tape, Orange Is the New Black has also taught us that there is no one way to be attracted to people (even if some take issue with the show's bisexual erasure). If anything, fans of the show will recognize sexual fluidity is part of life for many people.

Now go finish binge-watching Piper, Poussey and the gang, and follow Ruby Rose on Instagram to keep up with your new fantasy girlfriend.