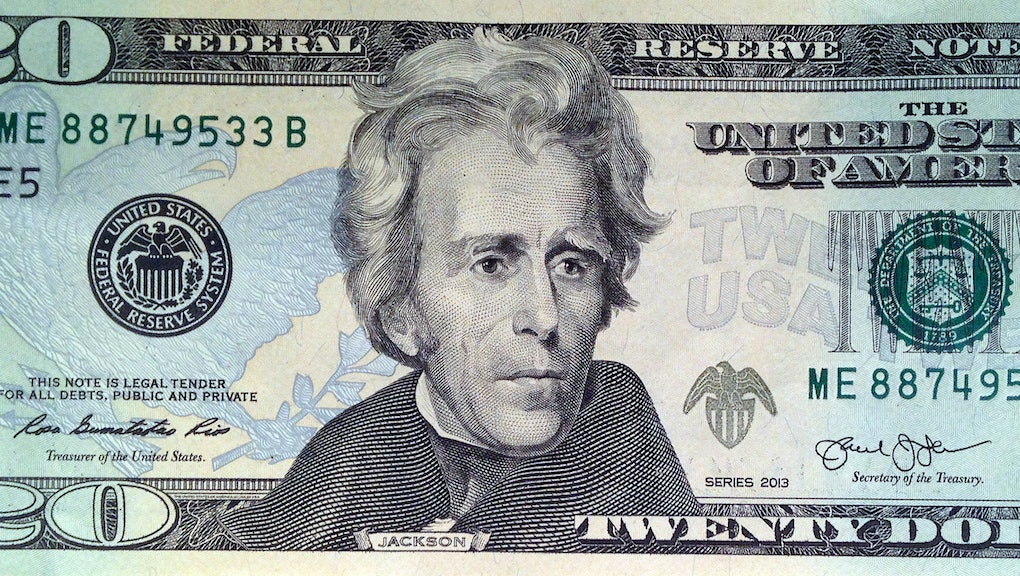 5 Reasons We Should Kick Andrew Jackson Off the $20 Bill

In March, 62-year-old Barbara Ortiz Howard launched the nonprofit organization Women on 20s, which as name suggests, calls for a woman to appear on the $20 bill. Her call to action — a goal she reportedly had considered pursuing for years — quickly gained traction and inspired widespread media coverage, the support of Sen. Jeanne Shaheen (D-N.H.) and, as of Wednesday, a victory in the Treasury Department.

Or, at least a partial victory: Treasury Secretary Jack Lew announced a yet-to-be-determined woman will soon appear on the $10 bill, which currently features Alexander Hamilton. While it's encouraging the Treasury acknowledged the call for more equitable representation on U.S. currency, their refusal to take note of the deliberate call to remove seventh President Andrew Jackson on the $20 is disappointing.

"This issue isn't merely cosmetic, or a nod to political correctness," Jillian Keenan presciently wrote about removing Jackson from the $20 bill in a 2014 Slate article. "Symbolic change and practical change have a symbiotic relationship. By confronting and correcting the symbols of our violent and racist histories, we prompt conversations about how that legacy continues to affect marginalized communities today."

The Treasury may ignore the importance of these symbols, but in honor of continuing those conversations, here are five reasons replacing Jackson with a woman was a meaningful move — and why he should still be removed from the bill.

1. Jackson owned and profited from the labor of slaves.

By the time he died, Jackson owned approximately 150 people, according to the Hermitage, which was Jackson's plantation. While Jackson was not the only president to own slaves, he profited from the labor they performed harvesting cotton on his 1,000-acre estate.

2. He sparked a war trying to return slaves to their owners.

In the early 19th century, Seminole Native Americans in Spanish-controlled Florida often provided refuge to runaway slaves. In 1818, when he was a general, Jackson led more than 3,000 soldiers to terrorize the Seminole and return escaped slaves to their owners. This event is now known as the First Seminole War, and the egregious acts of violence against these minority groups should be evidence enough that he hardly deserves a positive legacy.

3. He committed genocide against Native Americans.

As if being a slave owner and inciting a war to ultimately benefit slave owners wasn't enough, Jackson is responsible for the Indian Removal Act of 1830, which forced the Cherokee people from their land to venture west. This forced march — now known as the Trail of Tears — killed thousands of Cherokee people. By 1837, the Jackson administration forcibly removed 46,000 Native American people from their land and 4,000 Cherokee individuals perished, according to PBS.

Certainly the least egregious of the points against Jackson but worth noting is the fact that he opposed paper currency. As the Women on 20s website notes, "because Jackson was a fierce opponent of the central banking system and favored gold and silver coins or 'hard money' over paper currency, he is an ironic choice for immortalization on our money."

5. The $20 bill is a potentially empowering symbol for women in this country.

Beyond the irony and injustice of featuring Jackson specifically on this bill, doing so occludes the potential positive symbolism of featuring a woman on it. As the Women on 20s organization points out, since the 19th amendment — which legalized suffrage for women — was passed in 1920, "it seems fitting to commemorate that milestone by voting to elevate women to a place that is today reserved exclusively for the men who shaped American history."