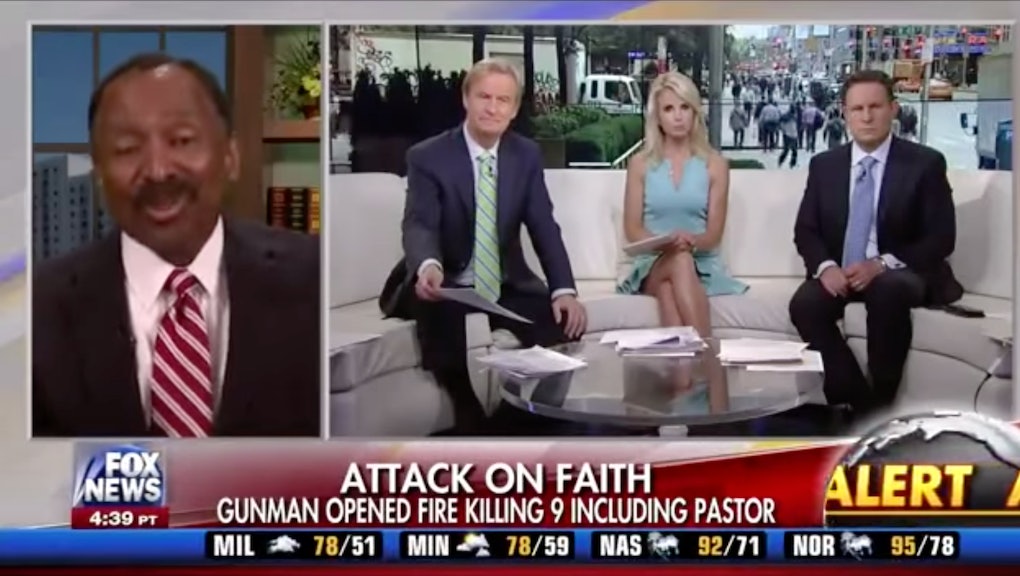 The FBI and other federal agencies are already investigating Wednesday night's tragic massacre of nine people at a historic African-American church in Charleston, South Carolina, by Dylann Storm Roof, a white man, as a hate crime.

While most have taken that to mean the attack was motivated by racism, viewers watching the Thursday morning edition of Fox and Friends were treated to an alternate theory by host Steve Doocy and far-right evangelical leader the Rev. E.W. Jackson. Apparently, the shooting was part of a larger trend in which American Christians are being targeted for their "biblical views," and anyone who brings up the role race played in the shooting is just trying to rile up racial tensions.

Doocy called it "extraordinary" that authorities had concluded it was a hate crime, adding "some look at it, because it was a white guy, apparently, in a black church."

Doocy said that if it were a hate crime, it was probably one directed at God-fearing Christians. He added Jackson had "a good point just a moment ago about the hostility towards Christians."

"And it was a church," he emphasized.

The "good point" Doocy was referring to was Jackson's conclusion Christians were facing "rising hostility" "because of our biblical views" and that his fellow pastors have "got to arm ourselves."

"Well, yeah, most people jump to conclusions about race. I long for the day when we stop doing that in our country," Jackson concluded.

Imagine if in 1963 following the bombing of a black church in Birmingham, Alabama, that killed four African-American girls, national commentators suggested  Christians and "biblical views" were the real victims. It would sound a lot like the white-washing of a terrible crime, wouldn't it?