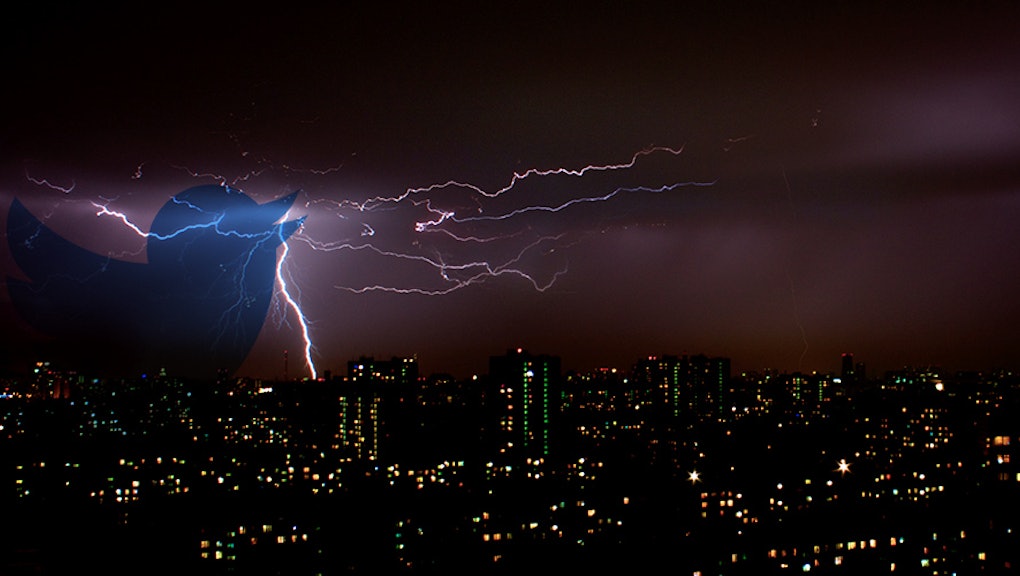 Twitter Just Revealed the Future — And, Finally, a Reason to Use It

As Twitter's growth stagnates, stock prices drop and the company struggles to find permanent leadership, users fear that the service may not last much longer if the company can't start making money. What's more, Twitter is notoriously difficult to learn and appeals mainly to a niche market of media and celebrities. It begs the question: Why would anybody use Twitter?

On Thursday, Twitter offered an answer: a new feature, so far codenamed "Project Lightning," that will add a special tab in the official app where you can follow feeds of live, breaking events throughout the day. Currently, when news breaks, users are tasked with scrapping together a column or list, exploring trending hashtags and hoping their followers are tweeting reliable and up-to-date information. No more.

On Twitter's mobile app, there will be a new button in the center of the home row. Press it and you'll be taken to a screen that will show various events taking place that people are tweeting about. These could be based on prescheduled events like Coachella, the Grammys or the NBA Finals. But they might also focus on breaking news and ongoing events, like the Nepalese earthquake or Ferguson, Missouri. Essentially, if it's an event that a lot of people are tweeting about, Twitter could create an experience around it.

Twitter is best when it's live. Whether the topic is an awards show, TV finale or breaking news like Wednesday night's shooting in Charleston, South Carolina, the Twitter community thrives when focusing on live events. (That's also a reason Twitter bought and launched Periscope, its very own livestreaming app.) From Quartz:

Aside from sports, major awards shows, breaking news events and the occasional reality show finale, live television is dead. That's bad news for Twitter. That's bad news for the advertisers whose commercials you're fast-forwarding over. And that's bad news for those of us looking for some conversation, who more often than not, find that we're left to mumble to ourselves on our own virtually deserted front stoops.Twitter doesn't work if we're all talking past each other about entirely different topics; lost in the egocentric, pathetic, little fake worlds of our own making. That's what Facebook is for.

Project Lightning, if successful, could make Twitter even better at the thing it's always been best at: allowing us to make sense of events as they happen, down to the moment.

Journalists are in high demand: Twitter is joining Apple and Facebook in the race to hire experienced newspeople. News is a huge reason for why people use social media to begin with — to share and comment on the major events of the day. Conversation and consumption keeps people on the platform longer, which creates more valuable, reliable customers.

Even Snapchat, with a Discover section full of breaking news and documentary video, has hired its own reporters and editorial staff to make it a hub for live events — and it's been making money:

That these tech companies — which have increasing power over the way we get information — are consulting with and creating jobs for journalists is good. Whether or not we can trust them with that increased authority over the way we learn about our world is another issue entirely.