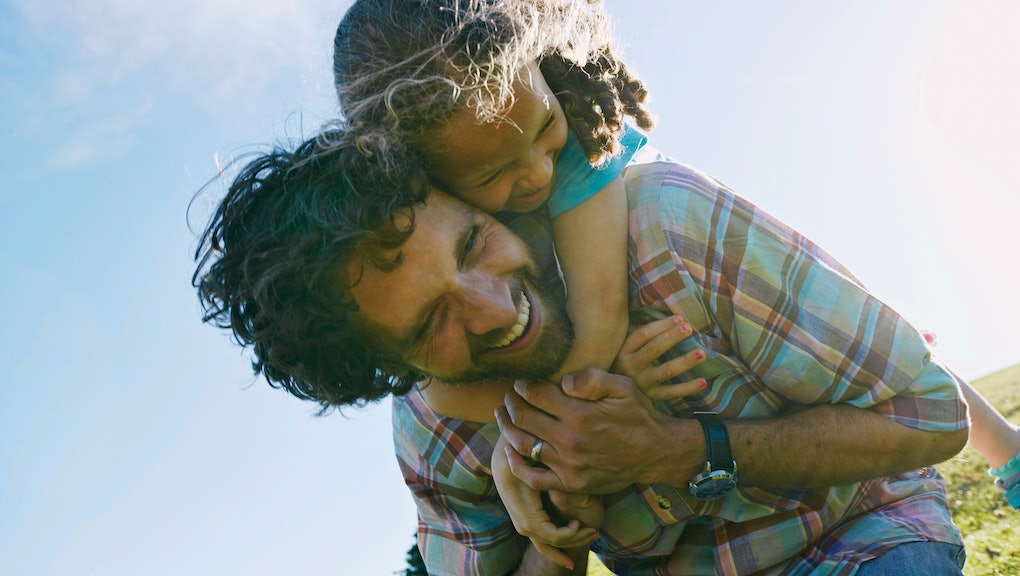 The Honest Truths About Fatherhood, From the 20-Somethings Just Getting Started

Whether it's those who boast the so-called "dad bod" or the "DILFs" gracing Disney World with their presence, younger fathers are having something of a moment. Young fatherhood, played out in magazine covers or viral photos, is sexy.

But for the 4.5% of American adults, ages 18 to 34, who are dads, it's also challenging. The incredible joys, the anxieties and all of the sacrifices — that's the side of young fatherhood that's often overlooked or simply ignored. According to Forbes, more than 80% of millennial dads say raising kids brings them great happiness, but 20% admit that becoming a parent comes with a lot of burdens.

Twenty-somethings work hard and play hard, the stereotypes go. But plenty of 20-somethings are also parents. In honor of Father's Day, Mic is spotlighting the thrills and worries of fatherhood by going straight to the source. Here's what just a few millennial fathers have to say about dad duty.

"Every decision I make now, the first thing I think of is my child and how it will affect them. Everything from big decisions to deciding if I should take a taxi or drive home after a couple of beers." — Chris*, 26, who has a three-year-old son

"It has changed my orientation towards the world, and it has fundamentally altered my relationship towards the world. ... The first time I met my daughter, she was just under two months old. At that moment in time, which I will never, for long as I live, forget, all of my fears turned into a commitment to her, to seeing her and to finishing my degree (for a lack of a better term, to get my shit together)." — Elliot, 28, who unexpectedly became a father at 20 to a daughter, who's now eight

"[I wondered] how often would I get to see my friends? Could I still hang out with my friends, go out for one (several) drinks or smoke pot occasionally and be a responsible parent?" — Noam, 28, who has a newborn daughter

The day of birth can make you feel helpless.

"On the day he was born, what ran through my head was if my wife is OK and how can I help. There isn't much you can do when your wife is in labor besides be there and comfort her." — Tom*, 28, who has a 15-month-old son

"So, the day of my son's birth was the most stressful and most beautiful day of my life. My son was almost a full month early, so ... it was going to happen, I started to have a lot of anxiety just worrying about everything going smoothly and my son being healthy. He was so small, it was scary. I was even scared to hold him sometimes." — Chris

"I was constantly worried about the health [of] my wife and our son. We were in labor for 18 hours but it felt like a month. I paid attention to everything that was happening and responded accordingly; the number one thing a guy can do on the day your child is going to be born is just comfort your woman. It's not an easy process whatsoever." — Sean, 26, who has a three-month-old son

The moment of "feeling like a dad" doesn't arrive immediately.

"After three days and two nights in the hospital, where we were pampered and cared for with nurses at our beck and call, the staff came into our room and essentially threw us out of the hospital. No warning or instructions other than 'Would you like me to call a cab for you?' It was truly a moment when my wife and I looked at each other in total disbelief and confusion: 'Now what?' That feeling of 'Okay, Noam, you gotta figure this out now' didn't start before that moment, and has not stopped lingering ever since." — Noam

"Being at the playground, talking with other parents. When you have a child, you automatically get put into a social group of everybody who also had children around that same year." — Elliot

Becoming a dad means your romantic life may shift.

"Kids change everything in a relationship. It goes from being all about each other to being all about the child. Which is very hard because it's literally like you are just friends and raising a baby together. It's harder to have intimate time because you're always tired and the baby is always there." — Chris

"It made things a little more tense with my job and my wife needing a break here and there. And me not being home. However, it also brings us closer together since it takes a team to raise a child." — Tom

You'll be more emotional than you ever knew you could be.

"It has made me so much more emotional since day one. ... I never really have been one to get upset about anything besides deaths in the family, now even commercials get me sometimes. Especially if it has to do with a parent/child relationship." — Chris

"I am more aware of my emotions, since my son sees how I come across." — Tom

"I feel this type of hulk-strong, unconditional, irrational, overwhelming love for my daughter.  At this point in my life, making friends can be a challenge. ... To make a new friend, a close friend, someone who you grow to love and cherish in your life is really challenging. The fact that this tiny girl came into my life in a matter of moments and garnered the type of feelings that she has, is truly special and, really, mind-boggling." — Noam

Changing a diaper can make you feel like an Olympic champion.

"People joke around about daddy points, but it's true. The day I changed a blow out diaper in the front seat of my truck while he was an infant was amazing. It was nasty and the worst poopy blow out ever, but the small feeling of accomplishment was good." — Tom

"He woke up in the middle of the night with what winded up being a very dirty diaper and was clearly upset about it. He was screaming and crying, so I took him into his room, changed his diaper, cleaned him up a little bit, and prepared a bottle for him. I sat down in the rocking chair and was about to give him his bottle when I noticed this big, ear-to-ear grin on his face, it was almost like he was saying, 'Dad, thank you so much for helping me out back there, you're the man,' and that was when I realized that I wasn't just a father, I was a dad." — Sean

You won't always be recognized for all that you do.

"When I go to the supermarket or store and he's with me, I get looks from moms as if I am doing something wrong. I get a look as if I'm too young for a child." — Tom

"You get a really strange mix of reactions [to young fatherhood]. But the one that bothers me the most is this notion that we don't care about our kids, or lack the desire to be involved in their lives. It's my sense that young fatherhood is held up as an example of recklessness as opposed to an opportunity to raise a happy, healthy, thriving child, regardless of the circumstances that brought you there." — Elliot

"A big fear after our son was born was whether or not I would be a good father. I had never even held another baby before my son. Will I be able to comfort him when he's crying? Will I panic when things are wrong? Will he like me? You constantly worry about your children — I don't think I'll ever shake this, as a matter of fact." — Sean

"At first you think you are going to break your child but in reality, you won't, but you still treat them as if they are made of glass."  — Tom

Above all, being a dad is one of the best fucking feelings in the world.

"The day I became a father was the biggest accomplishment of my life and one that I don't think will ever be trumped by anything else." — Sean

"[Becoming a father] was the happiest day of my life." — Tom

"There is no better feeling than having your baby fall asleep on your chest. To have the whole of your world literally in your arms is an incredible sensation." — Elliot