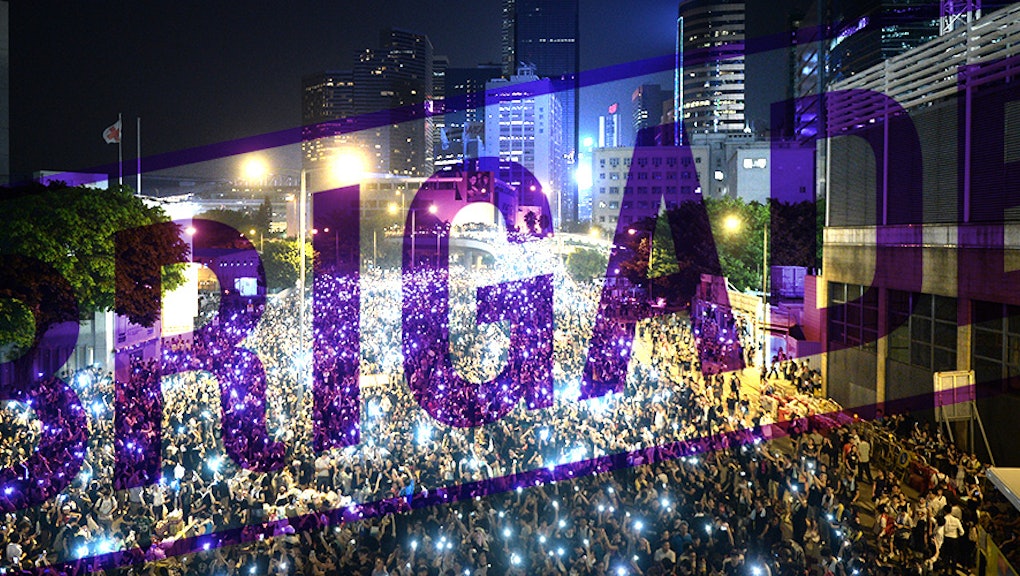 It's the age of slacktivism, and Facebook is full to the brim with political vitriol. Every day, your News Feed fills up with incendiary articles and turbulent battles about the government, social issues and the environment. And then, it seems, nothing changes, because nothing ever gets done.

A new app called Brigade, made by Napster founder (and Justin Timberlake character) Sean Parker, can help you find which of your friends share the same, specific political beliefs as you so that you can actually band together to get shit done.

In the years following Parker's departure from Facebook, the entrepreneur has since worked on a number of services focused on social activism and politics.

The Brigade app is invite-only right now — you can unlock your own invites once you're in — and already has 13,000 users. Brigade wants to launch half a dozen more tools by the end of the year that will all take on different needs for budding activists, like organizing and planning.

Social networks opened enormous new avenues for political expression. But for all of that progress, we're all still sitting behind closed doors.

Like Facebook, but for activism: The app gives you a number of stances to take a position on. For example: "People can live well making the current minimum wage," "The Internet should remain open and free," "People should go to jail for smoking marijuana" or "School lunches should be more nutritious." You can take a position, build a profile around your political beliefs, and then see how your friends — and global users at large — line up with your beliefs and opinions.

Each issue has a small comments section and forum, and you can earn "Impact" points for swaying opinions. But the point isn't just to create a separate social network for people to complain about the government. Brigade wants people to band together in real life to solve the problems they purport to care so much about, whether they're people who are your Facebook friends, in your contacts list or just in your local area.

According to Brigade President James Windon, voting is a model example of political malaise. In the U.S., local election never get the same kind of attention as national elections do, and candidates consistently run unopposed. With Brigade, you might be able to locate the people in your area who are interested in local politics and inform others about their options.

"Voting, we think, is the heaviest-weight action you can take as a citizen," Windon told Mic. "But in the moment, most people are having difficulty knowing who they should vote for."

Unfortunately, the app doesn't have geolocation yet. It's still young — there aren't many users, and the demographic skews predictably liberal. But Windon says that will even out with time, and more features are on the way.

The problem with slacktivism: Social networks have opened enormous new avenues for political expression. Facebook is the leading hotbed for political news, Twitter has launched entire revolutions and Reddit is a home for a number of communities around uncommon pockets of political ideology. But for all of that progress, we're still sitting behind closed doors.

"The act of being a citizen has become a more solo experience," Windon said. "The more you strip away the social aspect of an activity, there's a reduced chance that they'll do it."

But if everyone is connected to their political comrades, then there's accountability for inaction. We become socially motivated to act because we have our friends watching and waiting for our response. And if this is the app that gets us out from behind our apps, maybe it really can do some good.