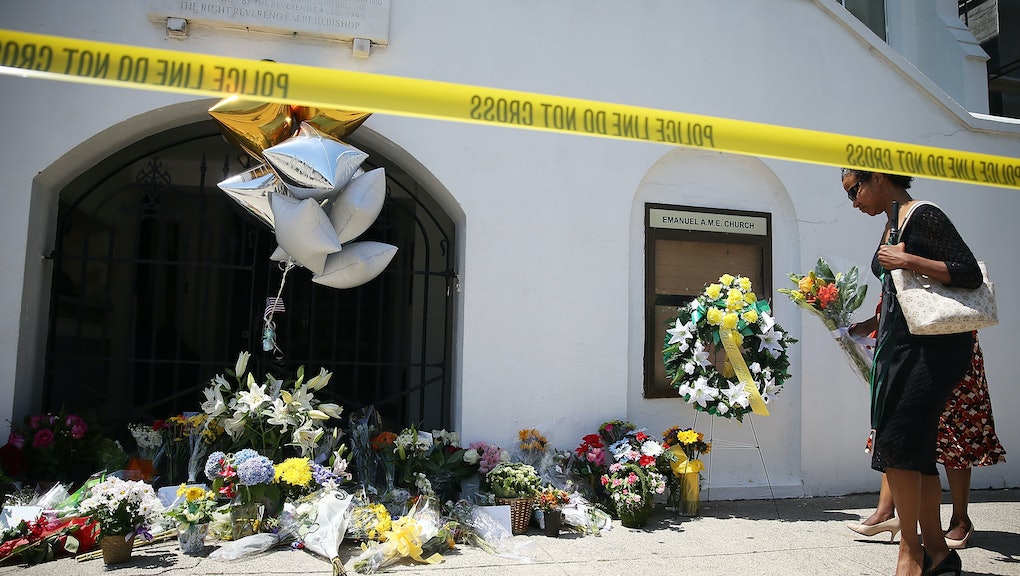 Nine people were killed by alleged gunman Dylann Storm Roof on Wednesday night at the Emanuel African Methodist Episcopal Church in Charleston, South Carolina, during a Bible study session led by reverend and state Sen. Clementa C. Pinckney, who is also among the fallen. This tragic incident is not the first the church's congregants have faced over the years, as the denomination's history is rooted in escaping slavery and oppression.

"What our church and denomination stands for is the universal vision of all people being treated fairly under the law as God sees him in his sight," Pinckney said in a 2013 video describing Emanuel AME's history, and its involvement in the centuries-long fight for racial equality. The video only solidifies the church's standing as a bedrock of Charleston's black community, and is a testament to its lengthy resilience in the face of adversity.

Now, more than ever, it's crucial to understand the history of not only black churches in America, but also the role they've played in fighting racism, oppression, and inequality through community and spirituality. Here's how Emanuel AME has become part of American history.

AME founder establishes church in defiance of racism: The history of this church begins with its denomination, the African Methodist Episcopal Church, which was founded in response to racism. In 1787, a man named Richard Allen left St. George's Methodist Episcopal Church in Philadelphia after he was told to "pray after the 'regular members prayed,'" Pinckney says in the 2013 video. Allen, a former slave from Delaware, became pastor of the Bethel AME Church in 1794 in Philadelphia, but had to soon defend the existence of the denomination from white Methodists. After a legal dispute with mainstream Methodists, Allen broke out to form an independent church. When he saw other black religious followers in need of a church that would not openly discriminate against them, he called a meeting in Philadelphia to form the African Methodist Episcopal Church as a denomination.

Breaking ground in Charleston: Influenced by Allen's efforts, the black community in and around Charleston formed a religious group that eventually became Charleston's Bethel AME in 1816, led by the Rev. Morris Brown. That church would later become Emanuel AME.

A failed mass rebellion changes history: In 1822, Denmark Vesey, a slave who had purchased his own freedom, became a leader within Charleston's Bethel AME and attempted to plan the biggest slave revolt in U.S. history, according to a 1999 Atlantic profile. However, an informant revealed Vesey's plans, prompting the entire operation to be shut down. Local slaveowners had Vesey and 34 of his co-conspirators executed, and 60 others were banished from the city, according to the Washington Post. Meanwhile, officials hid any records of the attempt, so as not to inspire others to rebel.

The Citadel forms to counter black resistance in Charleston: Vesey's legacy did not die with him. Pinckney said the state had become so worried that such a revolt would happen for years after Vesey's death. "From the Denmark Vesey incident, the state of South Carolina really really got concerned and scared," he says in the video. That's approximately when the Military College of South Carolina, known as The Citadel, was formed.

In the video, Pinckney points to the window and says, "The old Embassy Suites Hotel is [the site of] the old Citadel. The guns of the Citadel were basically facing this site and the neighborhood of African-Americans. That's how the Citadel got started."

A legal setback: Clearly, slave-owners and government leaders were worried, especially since the AME church had programs to teach people to read and was instilling the values of freedom and equality. The church was burned down in 1822, and in the 1830s a law was introduced that outlawed all-black churches. Worship services continued anyway, and the congregation met in secret for three decades.

Rebuilding in defiance: After the Civil War, the congregation reformed the church and built on Calhoun Street a structure that became Emanuel AME. According to the Washington Post, the building was erected a half-mile away from Fort Sumter, where the first shots of the Civil War were fired. It was also close to the site of a celebration among blacks once the war ended.

Force of nature: The wooden building was destroyed in 1886 by an earthquake, but then replaced in 1891 by a Gothic revival structure, which is the current site of worship, according to a historical account published by the College of Charleston. It was restored in 1949, and is known as the oldest AME church in the south, according to SCIWAY.

Moving forward: With so much early African-American history embedded in the church, it became a gathering place during the 20th century Civil Rights era. Booker T. Washington spoke there in 1909; Rev. Martin Luther King Jr. (above) and the NAACP's Roy Wilkins led rallies there in 1962; and Coretta Scott King led a march from the church's steps in 1969, the Post reports. The church became a site of activism for voter registration and educational efforts in particular, for its underserved community.

Called to lead: After years of work in public service, including his election to the state legislature in 1998, Pinckney became the church's pastor in 2010 at age 26, and led Bible studies as well as prayer sessions, the New York Times reported.

"I see everything I do as an extension of the ministry," he said in a 1999 Savannah Morning News profile. "It's all about service. In the community, in the African-American community, one person ought to say something and that is the minister. The minister is paid by the people. He doesn't work for a big company. He doesn't represent a particular special interest."