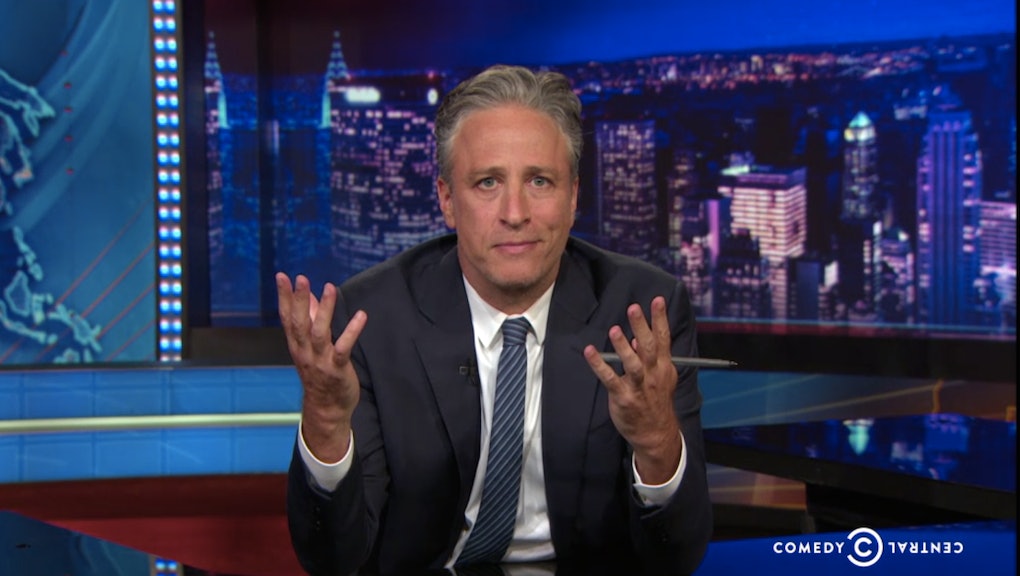 An Emotional Jon Stewart Is Left Speechless After the Charleston Shooting

Those were Jon Stewart's emotional words on Thursday night's The Daily Show as he attempted to discuss the painful tragedy of the Emanuel African Methodist Episcopal Church massacre in Charleston, South Carolina. On Wednesday night, Dylann Roof, a 21-year-old white man, shot and killed nine black people at the historically African-American church.

"I have one job. And it's a pretty simple job. I come in the morning and we look at the news and I write jokes about it," Stewart told to the audience. "But I didn't do my job today, so I apologize. I got nothing for you in terms of, like, jokes and sounds because of what happened in South Carolina. And maybe if I wasn't nearing the end of the run and this wasn't such a common occurrence, maybe I could've pulled out of the spiral, but I didn't."

Stewart spoke of the racial chasm tearing this country apart, which people refuse to fully acknowledge.

The most painful part of this tragedy, he said, is that we will do "jack shit" about it. No matter how many lives are lost, either at the hands of racist police officers or white supremacists, nothing changes.

If this had been an act of "Islamic terrorists," the U.S. wouldn't hesitate to rally around a violent response or wage war on another country, Stewart argued, because that fits into the simplistic ideology of "us versus them." There are wars in Afghanistan and Iraq and drones in Pakistan with military assistance in Yemen, but when it comes to the slaughtering of black people at home, we do nothing.

Stewart explained the depth of the problem by using street names in the South as an example. Every day, he argued, black Americans have to drive on streets named after Confederate generals who wanted to see black people dead.

"Nine people were shot in a black church by a white guy who hated them, who wanted to start some sort of civil war. The Confederate flag flies over South Carolina, and the roads are named for Confederate generals. And the white guy's the one who feels like his country's being taken away from him."