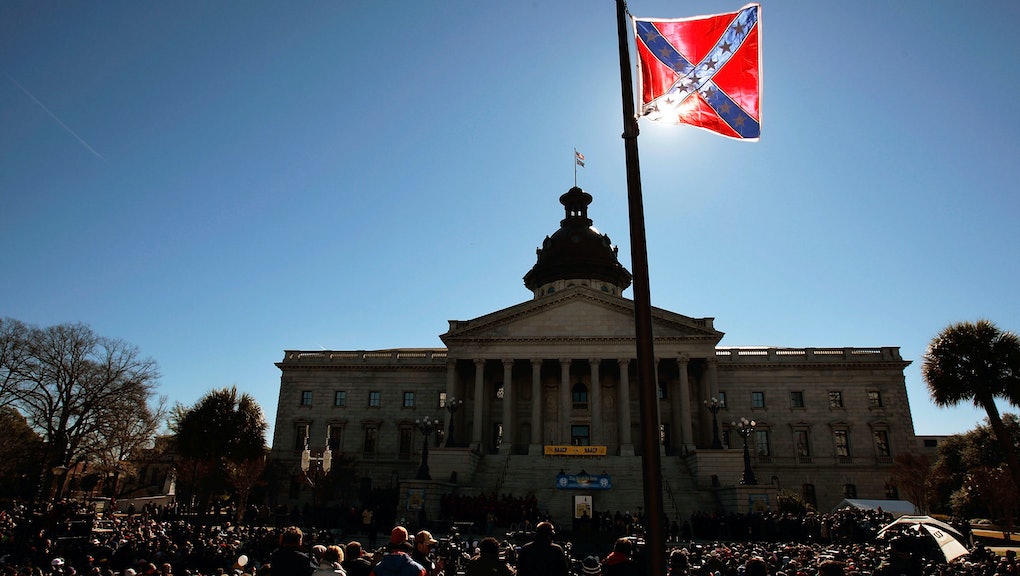 After the Emanuel African Methodist Episcopal Church hate crime massacre in Charleston, South Carolina, left nine black people dead, all the official flags throughout the state flew at half-mast Thursday. All but one: the Confederate flag. The symbol of slavery remained full-mast, defiantly flying high at the South Carolina Statehouse in Columbia.

Many have taken issue that the flag was not flying at half-mast after Wednesday night's shooting, but others are going one step further and arguing the flag should not be flying in the first place.

A MoveOn.org petition started on Thursday to end the use of the Confederate flag in an official capacity and, upon completion, will be delivered to the South Carolina Statehouse, the state Senate House and Haley.

It had more than 78,000 signatures of the 100,000 needed at of the time of publication, with many adding comments of their personal thoughts on the subject.

The Confederate flag is a reminder in South Carolina of an era when the state seceded from the Union in order to establish an independent nation built upon slavery, economically and ideologically.

"Our new government is founded upon exactly the opposite idea; its foundations are laid, its cornerstone rests, upon the great truth that the negro is not equal to the white man; that slavery subordination to the superior race is his natural and normal condition," Alexander H. Stephens, vice president of the Confederacy during the Civil War, said, as quoted by the Atlantic. "This, our new government, is the first, in the history of the world, based upon this great physical, philosophical and moral truth."

Republican South Carolina Gov. Nikki Haley attempted to whitewash the source of Dylann Storm Roof's hate crime — a deep-seated and unaddressed racism toward black Americans — by saying, "we'll never understand what motivates anyone" to do such a thing.

After people began objecting to the flag, Haley attempted to remove herself from the contentious issues, claiming she could do nothing about it. "In South Carolina, the governor does not have legal authority to alter the flag," a spokesperson for Haley told ABC News on Thursday. "Only the General Assembly can do that."

Sen. Lindsey Graham (R-S.C.) also defended the flag, telling CNN on Thursday, "this is part of who we are." He said symbols such as these are not the problem, but "what's in people's hearts" is to blame instead.

On Thursday night's Daily Show, host Jon Stewart gave an emotional message regarding the massacre and also systemic racism across the country. He identified the flag as part of the problem. "The Confederate flag flies over South Carolina and the roads are named for Confederates generals. And the white guy's the one who feels like his country's being taken away from him," he said.