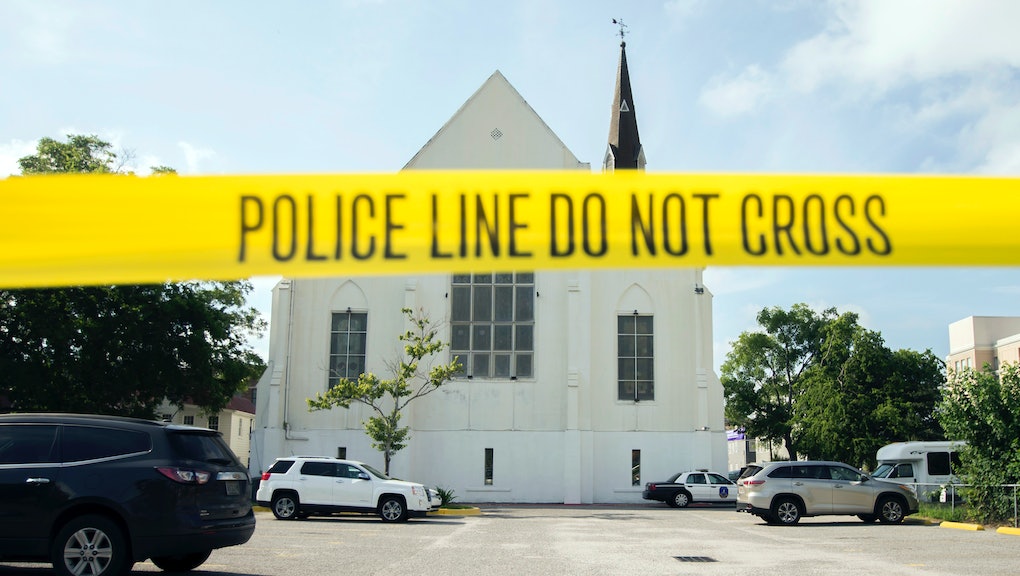 Why Can't the Republican Candidates Admit the Charleston Church Shooting Was Racist?

The outpouring of support and anguish was universal among Republicans running for president, most of whom expressed their heartbreak over the tragedy and denounced the crime as a heinous act of violence. But there was one aspect that most of those running for the Republican nomination have yet to acknowledge: that the attack was racially motivated.

The alleged killer himself was a virulent racist, wearing the white supremacist flags of Rhodesia and apartheid South Africa and telling one friend that he wanted "to start a civil war," according to the New York Times. He reportedly told one of the victims that "you've raped our women, and you are taking over the country ... I have to do what I have to do" before shooting him.

It's undeniable that Roof was motivated by a hatred of black people. So why can't Republicans running for president say what everyone else already knows?

What they're saying: Former Florida Gov. Jeb Bush said on Friday that "I don't know what was on the mind or the heart of the man who committed these atrocious crimes." His communications director, Tim Miller, said on Twitter that Bush believes the attack was racially motivated, but Bush himself told a reporter from the Huffington Post something different:

Former Pennsylvania Sen. Rick Santorum claimed the massacre was an "assault on religious liberty." Louisiana Gov. Bobby Jindal, who has yet to officially announce his candidacy, strongly condemned the attack before saying that "I don't think we'll ever know what was going on in his mind."

To their credit, a few Republican candidates have acknowledged the racial component of the attack. Sen. Lindsey Graham of South Carolina did so only after initially blaming anti-Christian hate. He appeared on The View on Thursday and dismissed the notion that Roof was motivated by racism, instead speculating that the suspect was driven by a desire to kill Christians. "There are real people who are organized out there to kill people in religion and based on race, this guy's just whacked out," he said. "But it's 2015. There are people out there looking for Christians to kill them."

On Friday, Graham reversed himself and called the attack a hate crime, saying "the only reason these people are dead is because they're black."

Dr. Ben Carson of Maryland hinted at a racial component to the shooting, writing shortly after the attack that "racial based hate is still very much alive as last night so violently reminded us." The rest of the candidates have chalked up the massacre to the mental health of the suspect and the general existence of evil in the world.

Twisted logic: The reason that Republican candidates are avoiding the issue of race is pretty straightforward. The typical conservative response to racist incidents is to frame them as outliers and not part of a broader trend of institutional racism and violence against black Americans. This point of view was summed up in an editorial in the Wall Street Journal on Friday, in which the paper's editorial board cautioned against reading too much into this one crime:

Amid the horror of Charleston, it is also important to note that the U.S., notably the South, has moved forward to replace the system that enabled racist killings like those in the Birmingham church ... Today the system and philosophy of institutionalized racism identified by Dr. King no longer exists.

This would be news to the many thousands of black men sitting in prison for minor drug crimes, or the unarmed black men and women gunned down by police. The twisted logic employed to deny the existence of institutional racism inevitably leads to denying that even the most heinous instances of racism are, in fact, motivated by race.

This is why Republican presidential candidates can't say what everyone else sees as clear as day. To acknowledge that Roof was a white man who allegedly targeted black people because of their race is to acknowledge that racism is very much alive in 2015. Recognizing that fact would compel Republican politicians to formulate policy solutions to address these issues — solutions that many Republican primary voters view as excuses to expand government and restrict their freedoms.

Republican candidates are therefore forced to twist themselves into knots to come up with a different motivation for the Charleston atrocity. But if they can't even bring themselves to recognize racism in its most heinous forms, there's little hope that they'll see it in the most subtle.